The best part about the ISL auction was not that Chhetri was signed by Mumbai City FC or that Robin Singh finally gets to play for a football club in his home ground. Instead, it is the absolute bonkers that ISL franchises went over a man named Eugeneson Lyngdoh.

Eugeneson Lyngdoh: From an Unknown to an Indian Star! One year ago, Mr. Lyngdoh was a virtual unknown. Nobody outside the Indian footballing circles and fans really knew about him.

Eugeneson Lyngdoh or Eugene, as most people who don’t want their tongues tied up in a knot call him, played for Rangdajied United.

Rangdajied United is a very small Meghalayan club located in an out of the way city approximately 20 kilometres from Shillong!

What’s more impressive is that Eugeneson Lyngdoh played only 21 games for this obscure club in its biggest season to date (2013-2014, the season when they qualified for the I-League).

That’s where his star really rose. But, no one had any idea by how much his star had risen. Judging by the incredulous expressions that Eugeneson Lyngdoh was sporting while bids were being made for him, I don’t think even he knew how big he had become.

Sunil Chhetri’s auction was to begin at Rs 80 lakh. His value finally reached Rs 1.20 crore. And, who was it that almost met that number? Why, Eugeneson Lyngdoh of course.

Eugeneson Lyngdoh was finally snapped up by FC Pune City for Rs 1.05 crore. That’s only Rs 15 lakh short of the man who everyone in Indian football adores to the bone.

So, from fourth lowest value to the second most expensive Indian footballer – that’s a climb of massive four times. No one else in the auction can claim that kind of value appreciation curve.

Ok, so you’re a tough cookie to crack if you’re still not impressed with this rags to riches story of Eugeneson Lyngdoh. However, don’t count me out yet. I have an ace up my sleeveless vest. I like to feel the wind in my underarm hair while I ride… wride… (damn it!)… write!

Here’s the ace. Five out of the eight ISL franchises were bidding for this man. Who were they? They were FC Pune City (winners), Atletico De Kolkata (second highest bidders), Northeast United FC, Mumbai City FC, and Kerala Blasters FC.

This means that Eugeneson Lyngdoh got the vote of confidence some really impressive names – Cesar Farias, Habas the Henchman, Peter Taylor, Nicolas Anelka, and David Platt!

If even that’s not enough for you. Check out this goal.

What Next For Eugeneson Lyngdoh?

The problem with rising so high on the ladder so fast is that the height often ends up making you delirious. So, once you’ve risen so high, the next big challenge isn’t to win trophies or gain sponsorship money.

Instead, it’s to keep your feet on the ground. Now, don’t get me wrong. I’m not some psychologist, personality manager, PR expert, spiritual guru, or any of those other fashionable things that people want to be. I’m only calling it as I see it.

According to me, as long as you’re grounded, the other things come automatically because no one ever rises to cloud nine without there being talent or hard work to back it up. After all, how can there be smoke if there’s no fire.

In effect, the challenge for Eugeneson Lyngdoh is to hunker down and repay the faith that these great names have already shown in him. Not letting the price get to his head is the first step. Focusing on basics of passing and movement is the other.

Goals and the trophy can come later.

No, this isn’t some Indian version of the funny martial arts wielding movie star. This is just a boy whose parents loved Jackie Chan so much that they decided to name their kid after him.

Does that mean that I can name my kid Drunken Master? I loved that movie.

In any case, their kid seems to have done fine. Jackichand Singh was the first player to be auctioned. FC Pune City had a strategy and they went full throttle with it immediately. So, they bid for Jackichand Singh from the get go.

Their primary competition came from Mumbai City FC and between the two of them, Jackichand Singh’s value went up to Rs 45 lakh from the starting value of Rs 20 lakh.

Jackichand Singh is a tricky winger who idolises only the best footballer in the world, Lionel Messi (a hat tip to Harshit Kabali). His playing style isn’t all that different either. However much the gulf in class may be between Jackichand Singh and his idol, he does have the talent to excite the Indian Super League.

He isn’t different from Eugeneson Lyngdoh in that regard. So, I am looking forward to seeing how these two players do under the tutelage of David Platt.

The prodigal son has returned!

After a long wait, Robin Singh will be plying his trade in his hometown. No doubt, his parents, who are massive football fans, will be happy their star of a son will come home to play with Delhi Dynamos FC Time to play for Hometown Club

It was a topsy-turvy day as auction days have been known to be. This was especially true for Delhi Dynamos FC who has lost out on their bid for Sunil Chhetri to Mumbai City FC earlier. They had bid Rs 1.15 crore for Chhetri before Mumbai bid with Rs 1.20 crore.

However, they had a backup plan and it involved winning the signature of hometown football star Robin Singh.

Robin Singh, as explained earlier, is a beast of a striker whose specialty is using his physical stature to bully defenders. He is a good header of the ball and can hold it up on the ground as well.

Holding the ball up in the striker position can bring wingers and midfielders into play as they will look to make darting runs behind Robin Singh. Robin Singh will no doubt look to feed his teammates as Roberto Carlos will most probably also set his fullbacks to bomb into forward positions.

Not Many Bids for Robin Singh

The surprising factor with Robin Singh’s auction was that there weren’t many bids for India’s second favourite striker. The only team vying for Robin Singh against Delhi Dynamos FC was Kerala Blasters FC.

Kerala Blasters FC, smarting from their loss of Iain Hume to Atletico De Kolkata, took their bid to Rs 50 lakh before bowing out of the bidding process. In the end, it was strange that no other teams bid for Robin Singh since he is regarded as a talent in the Indian setup.

However, with all respect to Robin Singh, I don’t believe he is going to be able to make that much of a difference to the team he plays for, as I explained earlier. The other ISL teams seemed to have agreed with me and the final price for Robin Singh was an underwhelming Rs 51 lakh.

I do hope that Robin Singh makes a difference though. I like people with a fire in their belly and Robin Singh certain has the flame of R’hllor flowing through his veins. Expect him to give it his all. Who knows, he may improve to a level that no one though was possible before.

A Statement of Intent from Delhi Dynamos FC Remember, this is a crucial capture for Delhi Dynamos FC simply because they’ve been late to the ISL squad preparation party.

While they’ve been lazing around and waiting to confirm a manager before signing key players, other teams have been active from the get go.

At the same time, when Roberto Carlos confirmed his role as marquee player manager for Delhi Dynamos FC, he specified that they’ll be looking to bid for Chhetri and Robin Singh. Even though they didn’t succeed with Chhetri, they struck gold with Robin Singh.

Delhi Dynamos FC’s signing of Robin Singh is also not surprising because Roberto Carlos specifically stated that he will look to bring Delhi players in to play for their city’s club. In addition to Robing Singh, Delhi Dynamos FC also brought in Anas Edathodika, who till now has been playing as a Central Defender in the I-League.

Roberto Carlos hasn’t been a very successful manager in his last two stints, so it’ll be interesting to see how he fares in India. 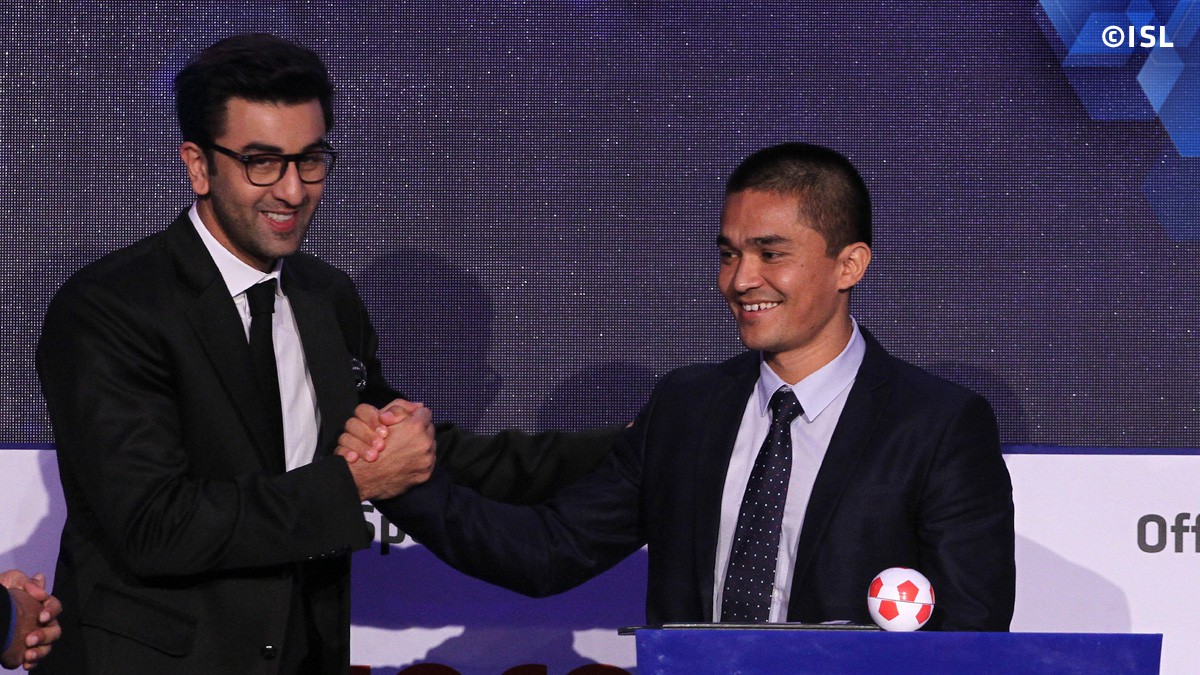 So, the most popular Indian player’s fate in the Indian Super League 2.0 is sealed. He was picked up by Mumbai City FC led by Anelka for no less than Rs 1.2 crore. The main contenders for Chhetri’s signature were, surprise surprise, Delhi Dynamos FC.

In fact, Delhi came very close to grabbing Chhetri with a bid of Rs 1.15 crore before Mumbai took it up a notch to the final price.

Most people expected Atletico De Kolkata to bid for Chhetri and there will be many long faces in the City of Joy as no bids came out.

However, I don’t really expect those faces to remain long for…err… long because I expect they will announce a marquee striker soon. Even if their marquee player turns out to be a playmaker, it’s not all doom and gloom for them because they already have the star of last season Iain Hume. Yay! I can learn from Anelka…

This is a sign of what Anelka thinks of his own fitness levels because if he felt that he could carry Mumbai City FC singlehandedly, he wouldn’t have bid for a striker.

This is also a good sign for mumbaikers because it shows that Anelka is not thinking with his ego and pride and is instead using his head with regard to leading Mumbai City FC.

Delhi Dynamos FC’s shambolic preparation for ISL 2 continued, however, as they couldn’t go all out for Sunil Chhetri. Delhi Dynamos FC, unfortunately, started really later with regard to preparing their squad and, I believe, part of the reason for that was that they didn’t have a manager.

As soon as Roberto Carlos confirmed his position with the capital’s team, the Dynamos management went into overdrive trying to secure players for their squad. However, while Delhi Dynamos FC failed to secure Sunil Chhetri’s coveted signature, they did managed to swoop in for the other high profile striker Robin Singh who was born and brought up in Delhi.