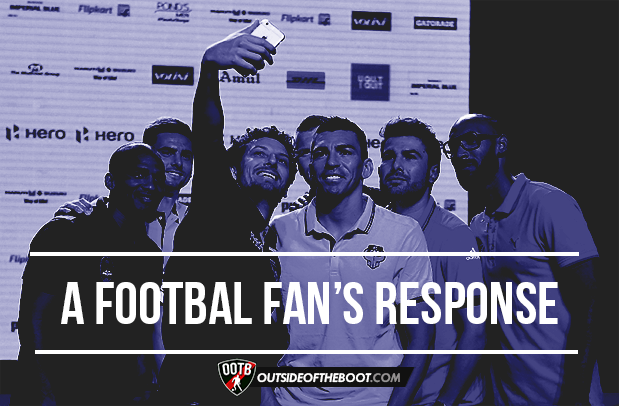 Football in India is still developing and has a potential to be something really special. However, misinterpretations and misrepresentations can derail that development potential in a hurry. This is an effort from an Indian football fan to prevent that derailment published first on the Outside of the Boot website.

The Indian football fan is an infant in a world where families have generations of football team followers. We’ve all heard of people who’ve been following a team from the moment they learnt to walk. In fact, when there are multiple teams located in a single city, it can invariably cause members of the same family to support different teams. We Indians can only imagine the kind of married spats and sibling rivalries that must create in those households. However, all this does not mean that Indian football or the Indian fan must be taken with a pinch of salt. Unfortunately, the Indian media seems to think otherwise.

Within a few days of the beginning of the Indian Super League’s 2015 session, stories trashing the ISL Marquee Players concept started appearing in Indian mainstream media. Unsurprisingly, it seems to have become norm for Indian publications and channels. Virtually, every single one of them has at least one article, programme, or episode explaining why getting ISL Marquee Players is such a bad idea for everyone and everything involved from Indian football, Indian footballers, Indian national team, and Indian fans to their grannies. Well, we Indian fans beg to differ. Here’s a response from an Indian fan against Indian mainstream media’s convenient ISL Marquee Players narrative.

For those of you who are not Indians, are Indians but not football fans, or are neither Indians nor football fans, let’s establish the context. Let’s explain why the Indian media and possibly some international media organisations are opposing the idea and benefits of ISL Marquee Players. In simplest of terms, the reason is this:

Those are the playing stats of all ISL Marquee Players in the 2015 season up until November 4, 2015. If you only look at the table, you’ll notice most of the prevalent bugbears that Indian mainstream media has against the ISL Marquee Players concept. It seems as if the stringers hired for the job (football hasn’t been all that popular in India, you see, and ROIs on hiring dedicated football journalists don’t really pan out for media organisations) simply look at the stats and write their pieces. Let’s approach those bugbears one by one.

The Impact of Legendary Footballers on Indian Players

If you really want to improve at something, do you choose to play against weaker players or better players? Any individual serious about improving will say better players. Someone better than us at something will always push us to match them.

This is precisely what is created by the ISL Marquee Players concept. When Indian players go up against legendary footballers from the four corners of the world, they exposed to skillsets, mind-sets, and playing styles that they’ve never seen before. After all, it’s not like Indian footballers travel a lot abroad to play with foreign players.

Before the ISL, even the Indian national football team only played against other Asian minnows. In fact, even the Asian minnows would beat us willy-nilly. Now, with the ISL Marquee Players, Indian players get a whole new perspective on football.

Look at what happened to Romeo from FC Goa when he played under Zico and with players like Andre Santos and Robert Pires last season. Santos isn’t even considered to be a world beater but his influence on the FC Goa team was pretty obvious.

The only reason the results of the Indian national football team haven’t improved is because the management is resisting the induction of Indian Super League players. Once this happens and the new additions get a little bit of time to work with each other, there will be results and rapid climb up the table for India. Just look at the state of the pitch…dust bowl anyone?

When a player comes to a fledgling franchise in India after having played for Chelsea, Arsenal, Real Madrid, Juventus, PSG, Liverpool, Manchester City, Porto, Valencia, Inter Milan, Bayern Munich, Sevilla, and Barcelona not to mention national teams like Spain, France, England, Brazil, and Portugal, that player will expect only the best.

Most of the ISL Marquee Players must’ve come to India and immediately provided inputs to franchise managers on how they can improve their training and facilities. Not only this, these football greats will also have brought in state of the art training methods and perspectives that Indian coaches wouldn’t have had till now.

This is exactly why the standard of Indian players has improved since the Indian Super League began. It is also why I – League clubs are worried about their position of being the biggest fish in the smallest ponds.

Does The Inclusion Of Football Icons Have Any Impact On Development? Here’s another question which can be answered by common sense. What happens when you bring an iconic figure to a backwater corner of the world? The backwater corner stops being backwater because it is suddenly lifted up by the shining glory of that icon.

Make no mistake, footballistically, India was a backwater country before the Indian Super League showed up. If ISL was the system that stopped India from being a backwater country, the people who actually boosted the country’s image in the world were no other than all the ISL Marquee Players. It is because of the ISL Marquee Players that Indian football is being talked about in the US, Europe, and South America.

It wasn’t the Indian greats that made it happen. In fact, the Indian greats still can’t make it happen but they’ll get there so long as they continue playing with ISL Marquee Players. Imagine what kind of tips Sunil Chhetri must be getting from Nicolas Anelka.

Imagine what Florent Malouda must be teaching Robin Singh about movement in the channels. Imagine how Didier Zokora must be rounding the overly aggressive game of Eugeneson Lyngdoh. Imagine what understanding Nicky Shorey must be imparting onto the young shoulders of Jackichand Singh.

More importantly, the inputs from these football greats must’ve also been used in all the grassroots development that has been happening in the country since the establishment of the Indian Super League. Since, the ISL Marquee Players concept is at the heart of the ISL concept, how can supposed football experts not see what these players bring to the table even if they don’t play more than a single minute!

Any person with a balanced head on his shoulders and only the future of Indian football in his heart would applaud all the ISL Marquee Players, regardless of how little they’ve played.

Let’s swallow our false pride and accept that our existing systems of football were not working. Let’s bend a little and show some gratitude to the likes of Roberto Carlos, Robert Pires, Alessandro Del Pierro, Fredrik Ljungberg, and Carlos Marchena for agreeing to come to play in our country.