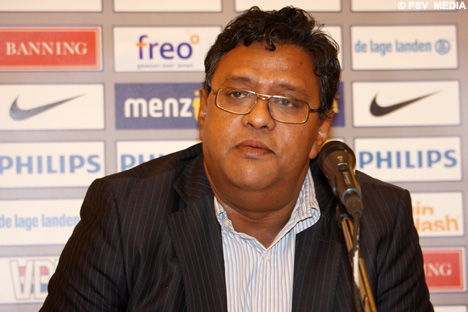 A week back, Arsene Wenger compared football to virus. In the same post, I had predicted that the only foot forward for Indian football is for the Indian Super League to merge with the I-League.

I said, “One way that I can see is that these teams get incorporated into the ISL and the ISL gets expanded to a full season with complete FIFA approval.”

It seems that the lady luck smiled on me and my prediction is going to come true, albeit in the next five years*. The revelation came by way of Reuter’s article on an interview of an Indian FA official**.

The official, one Kushal Das, the General Secretary of the All India Football Federation (AIFF) explained in clear terms that in the next five years the two rival leagues will merge to make one complete league with anything between 14 to 16 teams. His exact quotes were:

Probably 14-16 teams pan-India going on for seven to eight months. That’s the vision…

He seemed to be a forward looking official who was more interested in the sports then furthering his own cause, kind of a rarity amongst Indian officials connected to sports. He believes that the purpose of the I-League and the Indian Super League is to simply further the development of Indian football. Hear! Hear! I say!

Again he made no bones about it and was as explicit as anyone can be about what he’s talking about.

The ISL and I-League are a means to an end. The end is the development of Indian football.

It’s going to be one of the most crucial moves for Indian football. The first one was, you guessed it, the conception and successful completion of ISL which is on track. I believe the fact that the average attendance of the Indian Super League is miles ahead of the I-League is a distinct hint that the idea has been successful. What’s worse for the I-League is that a large chunk of that average attendance comes from the Bengal derbies between East Bengal and Mohun Bagan. How much crowd do these derbies draw? Why in the range of 100,000!

So, you can essentially bring down I-League’s average attendance to about 10,000. This means that the Indian Super League has drawn 2.5 times more people than I-League. If that’s not an argument for merging the two leagues, nothing will float your boat.

The biggest concern for the AIFF, as of now, will be making the combined competition profitable. Das says that it will take about 6 to 7 years for that to happen. I think the Indian public may just surprise them. Between television rights, match attendances, private investment, and merchandise, I do think that the league will become profitable much earlier than the projected timelines.

Expect Improvement In Quality Of Football But, defence is as much a part of football as attack. If you don’t like that side of the game, my honest suggestion is to give it a little more time and you will appreciate the tactics too.

I, myself, enjoy goals as much as any other normal bloke but can appreciate defence as well. After all, I doubt there’s an Arsenal fan in the world who doesn’t know the value of good defence.

It’s almost a part of the induction procedure for supporting that team. I’ve always felt that Arsenal fans were a little sadomasochistic anyways with the way the team’s defence has been performing of late. In any case, I’ve deviated.

My point was that Indian Super League has entertained even though the players haven’t had time to gel in and even though fatigue has affected the quality.

Think what will happen when the same teams get to practice together for 8 months and get enough rest between their games. The quality will shoot up!

Unfortunately, I see a downside to this plan too. This is the fact that our teams may have trouble luring the pedigree of players that we have right now. Right now, all the high profile stars we have probably came in thinking of playing hard for 2 to 3 months and then going away.

What happens when our teams approach a guy to play for 8 months? That’s a long commitment. It’s a minor problem that I’m sure some carefully printed photos of Gandhi on a rectangular piece of paper would not solve. Don’t let my penchant for the dark side of the moon affect you. For now, Indian football is on the up!

*Yes, I am blowing my own trumpet but that’s why one owns a trumpet, is it not? You own a musical instrument, so you play it. What’s the point of having a trumpet if you’re not gonna bother the neighbours with it? Seriously though, I am kind of ecstatic that I could predict something so crucial and so close to my heart. It’ll be fun watching these matches all year round. Wouldn’t you say? I’ll keep you company, if you’re worried.

**You can read the original article here.