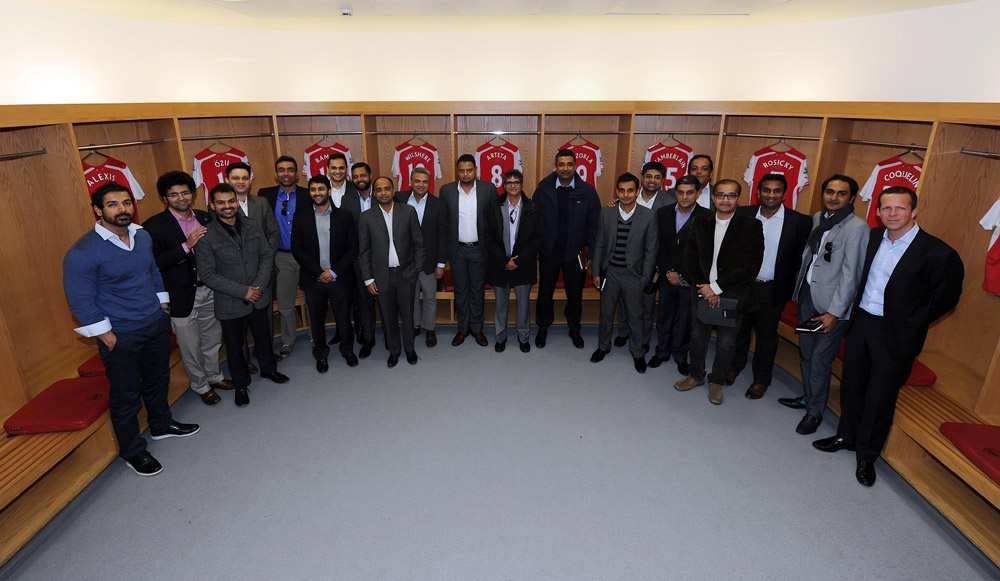 There’re two types of people in this world. The first type learns by watching, the second by studying, and the third by both.

The Indian Super League, blessedly, has decided to be the third type. Representatives of the ISL and its eight clubs had travelled to the UK to see how the English Premier League officials work. During the trip the Indian Super League organisers also studied the workings of clubs like Arsenal, Crystal Palace, and West Bromwich Albion.

What I Think the Indian Super League Organisers Went For Look at that grin! You could drive a bus through it. Its almost like he got a new movie deal…

The five day trip began on April 29th, 2015. While in the media the two contingents are spouting the usual platitudes, I see something deeper.

I don’t include John Abraham in that. Although, I may be doing injustice to him but if you see him in the photo, you can see the grin of sheer delight on his face. I think he got himself included in the contingent just so he could take a tour of the Emirates. Who can begrudge him that anyways? Lucky chump!

For the Indian Super League organisers, the 2014 edition was a massive success. Moreover, the way everyone seemed to have focused on grassroots development, it’s clear that that is the area where they feel they lack. Inside the Locker Room

In the short term, I have but one hope from this exchange of knowledge and knowhow – they will stagger the matches and put some gaps in the middles. The nonstop AK-47 of matches must stop. They aren’t only detrimental for poor little ISL fans and followers like me but also ruin the quality of the games being played.

If you ask me how the quick succession of matches ruins the quality of matches, consider the fact that all the ISL Marquee players are +30. Heck, English Premier League players at the top of their game would struggle to play every three days or so for three months flat. I swear we Indians are hell-bent on turning even our football league into a sweat shop being run by a pressgang. Sheesh…