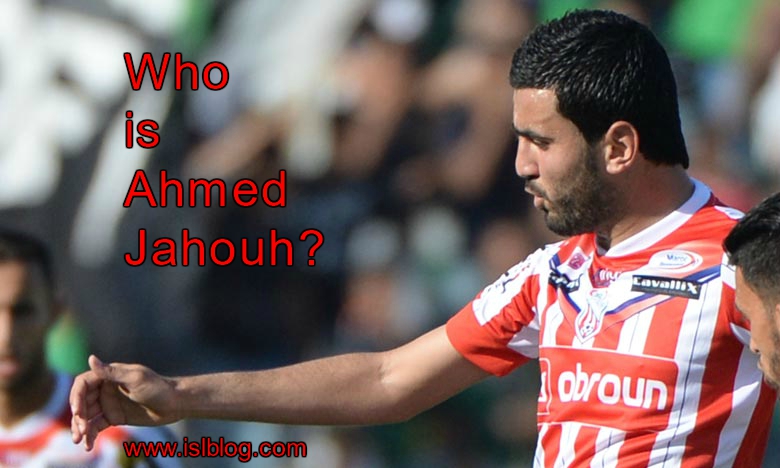 Let me make something very clear to you lot out there, the signing of Jahouh is a damn coup for FC Goa. His skill set is such that I expect him to dominate the midfield in every game for the Gaurs. He is that bloody good.

There’s this dude called Nisanth who wrote a piece for Goal.com recently titled “Marcelinho Who?…” It’s a well-written article and the theme is unique too but I feel that he missed a beat there. Well, Nisanth buddy, you talked about unknowns making a difference in ISL4. Jahouh will be one of those unknowns that you’re looking for and should’ve included in your article.

Anywho, I’m calling this one folks. Jahouh will be a big success in the league. How big a success? That will depend on how the rest of the Gaurs support him.

Who is Ahmed Jahouh? Sergio Lobera must’ve called in some favours to get this deal through. Jahouh isn’t a player past his prime. He is very much in it. He’s a 29-year-old Moroccan who is coming off a decent (if not great) campaign in the Botola Morocco Telecom (Moroccan top league). Jahouh’s a player who has won the first division with Moghreb of Tetouan in Morocco multiple times with the most notable one being the 2011-2012 victory.

More importantly, Jahouh was once recognised as the best midfielder in the Arab Nations Cup in 2012. This was a tournament that saw the likes of Egypt and Iraq, two very successful teams in the region. Jahouh’s best season was 2015-2016 when he played for Moghreb under Sergio Lobera (ooh, all of it makes sense now). Jahouh was instrumental in making history as he helped his club reach the African Champion’s League. This was the first time ever that a Moroccan club had made it.

Jahouh may not be a Vieira or Matthaus but he is also not a “ball winning midfielder”. He’s a defensive midfielder who can tackle. I’ll explain the difference in case you still didn’t get it.

Defensive midfield is a position. It isn’t a style of play. Anchor-man, ball winning midfielder, water carrier, deep-lying playmaker, and box to box midfielder are styles of play.

Jahouh performs best in the role of deep-lying playmaker where he can break up play and launch attacks for his team with his excellent passing range. However, Jahouh can also be good as a box to box midfielder because he has the stamina. Jahouh as a ball winning midfielder is being sold short considering his inherent skill set.

Jahouh’s greatest attribute is his footballing brain and presence of mind on the pitch. His understanding of the game allows him to be decisive on the pitch. You won’t find Jahouh dallying on the ball for too long like a Romeo waiting for a secret dalliance with the forbidden babe. He will receive the invitation (the ball), make a quick decision (I’ll come pick you up babe), and ensure that he gets there (hell or high water).

He does the simple stuff well enough but he also incorporates little innovations in his game. He sees long balls and slide rule through balls equally well. Jahouh’s long balls, in fact, can turn the game on its head as you’ll find out soon enough. As mentioned earlier, Jahouh tackles well too.

Additional qualities that Jahouh possesses are his ability to make late runs into the opposition box to score goals, his freekicks, and of course his body strength. Jahouh is a big man who knows how to use his physicality but he relies more on his finesse. This is the most obvious weakness because sometimes you need to shoulder barge with the opposition player (50-50 challenges). There are other times when you need to grapple for position in the penalty box (corners and freekicks). The dark art, if you will, doesn’t interest Jahouh that much but he does employ them time to time.

Jahouh also can’t dribble like a traditional dribbler. He’s not a ball carrier and he never will be. He just doesn’t have the agility like all big men. However, he can evade his markers with tricks based on their momentum. His lack of agility also deserves a mention but luckily a defensive midfielder doesn’t need to be agile like a winger or an attacking midfielder.

What Can We Expect From Jahouh in ISL-2017 I will venture that I know why Lobera got Jahouh. It is because of his tactical understanding. This informs my prediction on how Jahouh will be deployed by FC Goa. I expect Jahouh to be Lobera’s lieutenant on the pitch. Lobera will relay his instructions to his team via Jahouh. Jahouh will be expected to be the glue that keeps the team en pointe.

Exactly how Jahouh will be instructed to play will depend on his defensive partner. If Pinheiro is his partner (unlikely), then I expect him to be more of a box to box midfielder. They may even interchange their positions and roles to confuse the opposition. If it’s someone else then I expect Jahouh to be the deep-lying playmaker. What I don’t doubt is that Jahouh will have a successful season in India for FC Goa. Jahouh will be an interesting character. The Moroccan culture is very similar to the Indian culture. They’re traditional about family life, hospitality, and integrity. So, Jahouh shouldn’t have any trouble settling down in India. Specifically, let’s see what he’s about, eh?