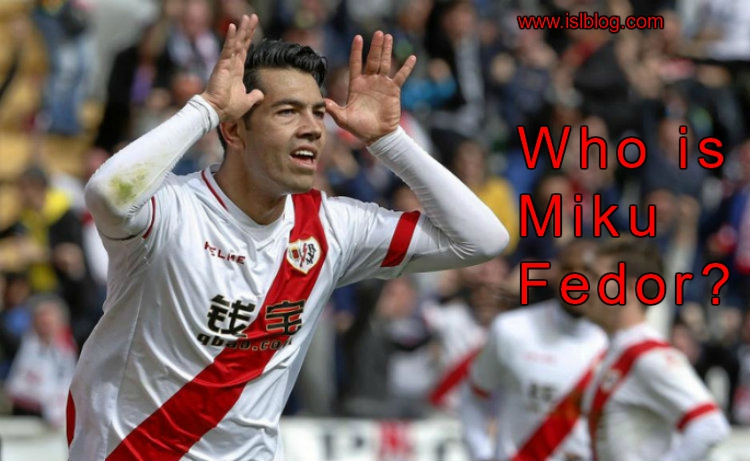 When I did a review of foreign players in the Indian Super League, Miku Fedor didn’t feature. That post came out on September 4th and Miku’s signing was only completed at the end of August. There wasn’t enough time for me to update that post. It was too big anyway and I couldn’t really add more to it. I just figured then that I’ll be writing this post in the future and let it go.

For the record, Miku deserved to be a part of that post. More so, than many other players. Why is that? You need to scout the player out for that… oh… right. You’re a smart one. Here’s my report.

Who is Miku Fedor? Miku Fedor’s propah name is Nicolás Ladislao Fedor Flores but his cute name is Miku (probably what Mika Singh’s mother calls him).  Miku is what I call a World Citizen. None of that nonsense of staying one place, having one nationality, maintaining one identity, or sticking to a single culture; Miku prefers to embody the concept of globalisation.

You see, Miku is half Hungarian and half Venezuelan. He was born in Venezuela but stayed in Spain for a large chunk of his life. Miku has also travelled and stayed in Qatar. Now, he’s coming to India to add to his diversely populated GPS of life. Legally, though, Miku is very much Venezuelan.

Miku began his career with Valencia in Spain. In fact, Miku joined Valencia after what is possibly the most golden period in their history. He probably thought that he’s joining a club at the top of the pile but the club decided to slide down the garbage chute right after he joined. I’d still like to add that it was through no fault of Miku that Valencia went into decline. He was only 19 at the time.

I liked Valencia in those days. They had quite a few of my favourite players then. There was Roberto Ayala – the big argentine, Pablo Aimar – the small argentine, Gaizka Mendieta – the midfield wizard, and even the behemoth John Carew.

Miku didn’t really make it at Valencia. He broke through to the first team twice in seven years before he was moved on to Getafe. It is at Getafe that Miku’s career prospered. He would end up playing nearly 100 games (92 to be precise) for them to score 26 goals (S/R of just under 30%).

Miku’s best season also came for Getafe in 2011 when he scored 12 goals as their primary striker. As a result, the most that Miku has been valued in his career was in 2012 @ €5 million (he’s worth €1 million now).

From Getafe, Miku went to Celtic in Scotland, Al-Gharafa in Qatar, and Ray Vallecano in Spain before arriving in India for Bengaluru FC.

What Are Miku’s Strengths?

Miku is one of those players that are effective without being exciting. This doesn’t mean he doesn’t have skills. He has plenty of those and we’ll talk about them. What I mean is that Miku is from a generation of Spanish strikers that you don’t feel much about. You don’t hate their style of play. You don’t love it either.

In fact, you actually end up not having an opinion about it. Still, even that kind of a player has the potential to be a superstar here in the fledgling Indian Super League. Let’s talk about the skills that can make Miku a star on Indian shores.

Experience has to be at the forefront of all his skills. I don’t just mean footballing experience but experience in general. Not many ISL franchises will be able to claim having a La Liga Player of the Month amongst their ranks. He’s not even that over the hill. Miku is only 32 years old which puts him just a little beyond his prime. The two most well-known strikers in the league are Keane and Berbatov. Remember, they’re 37 and 36, respectively.

Miku even has experience of playing in the best club tournament in Europe – the Champion’s League. With all this experience, I don’t find it surprising that Bengaluru FC are paying him top money. In case you didn’t know, Miku will be the highest paid player in the league.

On the pitch, Miku is very effective, even if he doesn’t make your pulse quicken. He can usually be found around the six-yard box ready to score. His positioning is quite good too. Somehow and despite hovering in and around the smaller box, he always happens to find space away from his markers.

This space allows Miku to receive the ball in dangerous positions which is half the work done. He’s good when it comes to the other half also. Miku has a very agile brain which he combines very well with snapshots. Once he receives the ball in the box, he almost always manages to turn his marker to get his snapshot off.

While I see Miku as an effective, no-nonsense forward who scores fairly consistently, he’s not completely devoid of flair. Miku’s flair comes in the form of single touches. You won’t find him dribbling through a crowd of defenders but you will find him pulling off audacious touches and lay-offs for runners around him.

What Are Miku’s Weaknesses? I keep repeating “effective” for Miku. It may mean that his qualities don’t really stand out but it also means that he doesn’t really have flaws either. When you actually look for flaws in Miku’s game, you’ll actually be clutching for straws. You may even think “he doesn’t do enough”. That statement is nit-picking, nothing more. So, here’s my disclaimer. I’m gonna nit-pick while you read this and continue nose picking.

Miku isn’t the fastest customer around. His pace is average. He won’t be able to outrun most people but he won’t get swamped by their pace either. This shouldn’t be that big a deal because he doesn’t rely on pace that much anyway.

In footballing circles, it is said that after 30 players start losing their physical attributes. It takes unholy discipline throughout your 20s for a player to not start losing pace and stamina after 30. This is the main reason why big clubs shy away from signing +30-year-olds and when they do they do it for short-term contracts.

I think Miku may have stamina issues as well. He’ll be playing in a completely new environment. He will be experiencing the Indian weather, which is tough for players in their prime. Between his age and the newness of the Indian environment, he may struggle with stamina. This means that he’ll pace himself in the middle of games. So, you may see him disappear for long stretches of the game before coming in with a key contribution.

The level of Miku’s involvement (this is an impression I have, I’m not sure how right I am) in the game concerns me. I don’t think he drops back into the midfield to help build up play. My hunch says that he’s your Poacher type of player who stays in the final third most of the time. That is a good thing and bad thing. Which one it is depends on how the team has been set up when he starts.

What Can We Expect from Miku in ISL-2017 I don’t know how much Miku is going to play for Bengaluru and what setup Albert Roca chooses to use him in. I don’t expect Miku to be their primary striker. They have an embarrassment of riches situation in that position. Apart from Miku, they have Nobrega and Chhetri. In addition, they even have Thongkhosiem Haokip and Alwyn George. Although, I think these last two will play wings.

I expect Miku to definitely score a couple in the whole season. Whether he scores more depends on how much he plays. Even so, seeing the kind of money Bengaluru are paying him, I think he will play fairly frequently. If he plays fairly regularly, then you can expect him to finish off some moves with confidence. I don’t think he will get many assists, though.