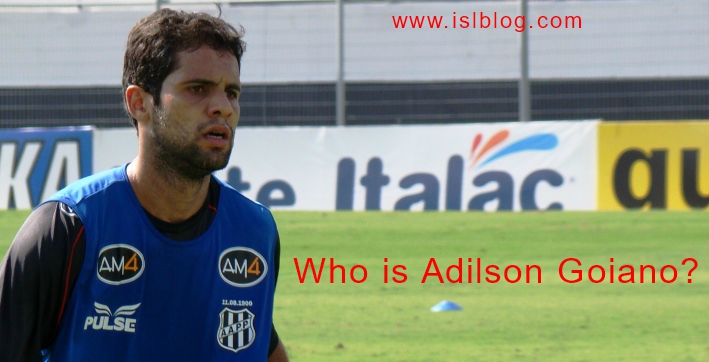 Did you know? Adilson Goiano has played for Mourinho? Oops, I got the spelling wrong there. It’s Morrinhos. It’s not the manager but a club. I can see why you would think he played for Jose Mourinho when he actually played for a very small club in Brazil. Gotcha, didn’t I? I couldn’t help but begin this armchair scouting piece without that little bit of trolling. What’s the point of the internet if there’s no trolling, eh? In any case, I’m sure you’ve figured out that I’ll be analysing Adilson Goiano in this instalment of Armchair Scouting.

Adilson Goiano is one from the clutch of footballers that NorthEast United announced after doing a little of their own trolling on their own fans. They actually had everyone worried that they haven’t signed anyone before pulling the rabbit… erm… multiple rabbits out of the hat. I’m sure there were about to be riots in the Highlands. If there would’ve been who would’ve fed me Tingmo huh? Dodged a bullet there I think. No, a momo is not a bullet. I would die a thousand deaths every day if it were. Onto to Mr Goiano then.

Who is Adilson Goiano? Let’s get the elephant out of the room i.e. stuff you already know. Goiano has joined NEUTD from FC Arouca in Portugal on a free transfer. He is a defensive midfielder who can do a job in the centre of the pitch too. Arouca plays in the Liga NOS (Thank you, advertisers, for ruining nomenclature norms) or the Primeira Liga as it should rightfully be called.

So, Goiano will be coming from the top league in Portugal which is home to Benfica (do you know Benfica once played a game in Goa against a Goan team?), Porto (Launchpad for Mourinho), and Sporting CP (developer of Cristiano Ronaldo and Luis Figo).

Adilson Goiano, incidentally, is Brazilian by birth and nationality. In fact, he has spent virtually the entirety of his playing career in Brazil. He only went to Portugal couple of years back. He, unlike most Brazilians though, is an unassuming player but we’ll get into that later.

Goiano happens to be one of the most expensive players in the Indian Super League in terms of estimated market value. He’s valued around £900,000. That’s nearly a million. The best year of Goiano’s playing career was 2016 when he appeared in the Europa League Qualifying round for FC Arouca. Goiano played 3 of 4 games for his team. He started two games and came on as a substitute in one, playing a total of 130 minutes against Dutch and Greek opponents.

Defensive midfielders come in various moulds. You have your destroyers in the form of Gennaro Gattuso and Claude Makelele. These are players that break up opposition play before simply handing the ball over to someone more creative. Then, there are foundation builders similar to Andrea Pirlo and Michael Carrick. These players are not hardmen.

They don’t rely on their physicality and aggression to dominate the midfield. Instead, they use their footballing brains. They intercept by being where the ball will be even before it has begun its journey. Once they have possession, they find the best outlet. Their mandate isn’t to lay it off to someone more creative. Instead, they are one of the most creative players in the team.

Their mandate, hence, is to find a ball that breaks the opposition’s defensive cohesion. This could be a through ball on the ground, a lofted hit over the opponent’s backline or even a simple lay-off into the path of an onrushing teammate. While Goiano doesn’t exactly fit in either of these moulds, he comes close to the second one.

The reason why Goian fits this role is his passing skill set. He has the ability to pick out cross field long balls and slide rule through balls alike. If he is presented with a run by a teammate, then he can slide the ball into his path. However, when there aren’t enough runs nearby, he also can loft the ball through the width of the pitch to find the player. Generally, this type of ball is used to switch-up play or find a diagonal runner.

The reason why Goian doesn’t fit this mould is that he tackles. While not a prolific tackler, he can put a cruncher in now and then. His tackles tend to be clean, standing and successful. There is very little sliding involved, which is definitely a positive IMO. I also feel that such a defensive midfielder needs the stamina to defend well. After all, how do you intercept if you don’t have the breath to reach the passing lane? This is something that gives me pause in the case of Goiano. Now, I will be the first one to admit that I haven’t seen Goiano play. This means I could be completely wrong about his weaknesses.

I find Goian to not be as mobile as required. His energy levels can be questioned. I don’t think he has a lot of pace to call on and his physical stature isn’t intimidating either. He is 5’ 10’’ which is just a little above the Indian average and he weighs 76 Kg. So, you shouldn’t expect him to shoulder barge an opponent off the ball. It is even possible that he’ll be shrugged off the ball if a player can get near him.

This can be a problem if the team isn’t set up around him to counter his limitations. In fact, all of Goiano’s limitations, I feel, are a result of his lack of athleticism. Consider the fact that Goiano doesn’t complete for aerial balls leave alone winning aerial duels. He simply doesn’t have the stature for it.

Similarly, consider the fact that Goiano doesn’t intercept passes a lot. He probably lacks the mobility to cover more than a single passing lane for it. Finally, Goiano is not that much of a threat in the opposition box. He doesn’t get there very often unless it is for a set piece.

While heading and goal threat are great qualities in defensive midfielders, they aren’t core skills. They’re instead additions or bonuses. Interception, however, is important in a defensive midfielder. Luckily, I don’t see this being that much of a problem for Goiano and I’ll explain why in the next segment.

What Can We Expect From Goiano in ISL-2017 The biggest challenge with Goiano will be his energy levels. He simply doesn’t have the physique and stamina to cover enough of the football pitch. However, the best part about all this is that the team he plays for is easily one of the fittest in the league. Not only that; northeasterners, generally, are considered to have a lot of stamina. Consider the fact that Gorkha Brigade is one of the fittest teams in the history of Indian football and you know that North Eastern ancestors are smiling on the marriage between Goiano and NEUTD FC.

I expect NEUTD to balance any lack of energy levels in their new defensive midfielder quite handsomely. This will free up Goiano to focus on what he does best – keep possession ticking and launch devastating counterattacks with long and short range passes. This is why I feel that Goiano will slot in seamlessly and immediately in the NEUTD FC setup. He is the perfect foil for their swashbuckling and swaggering style of football. There is precious little about Goiano on the internet and I don’t get paid enough to visit Brazil and talk to his family to find out what brand of diapers he wore in his younger years. Although, I would love to interview a footballer, what do you say Adilson? Want a tête-à-tête? Despite the absence of enough information, I will try to give you some interesting facts.