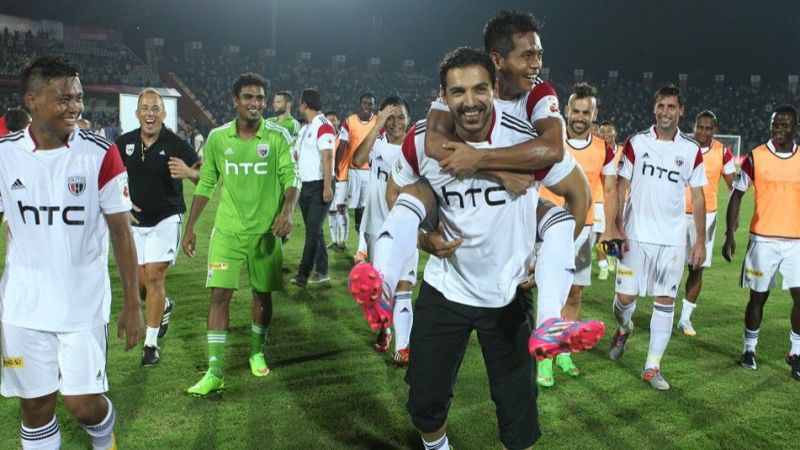 Like last season NorthEast United FC have been late in making transfer moves this season. Last season, they announced all their deals together. Even though they’ve left it all very late, they’re at least not announcing everything together. I, however, decided to club things anyway. After all, someone needs to keep the Highlander tradition going. They’ve recently signed Bartholomew Ogbeche, Juan Cruz Mascia, Jose Leudo (not snakes and ladders), and Augustine Okrah, that’s a Nigerian, an Uruguayan, a Colombian, and a Ghanaian. Those are the players I’ll be looking at today. Ogbeche’s primary claim to fame is that he’s a Paris Saint Germain product albeit a PSG before the great Qatari oil-funded takeover. While PSG were still a major club when the Nigerian was there, they didn’t boast of the kind of facilities and funding power they do now. Even so, while the current PSG may sit at the top of the pile, the PSG of that time wasn’t a minnow.

Therefore, a PSG product coming to play in India should be considered a big enough deal, provided the said player has achieved some great things in his career since. Ogbeche hasn’t; not significantly anyway if we were to look at his numbers.

He has played a total of 326 games, scoring 76 times and assisting 13 times in those appearances. It isn’t bad, if I was honest with you especially considering the kind of people NorthEast United FC have brought in in the past. Ogbeche’s probably going to perform better than most.

He seems to have a good instinct about where to be in the box and when. Additionally, his finishing is quite good too. He can also pass the ball and put in some delicious through balls on the run, which I feel will be the quality that will come in most handy to NEUTD.

Ogbeche has a good leap on him. In fact, his leap actually reminds me of Jamshedpur FC’s latest marquee, Tim Cahill. Like Cahill, Ogbeche times his runs well to gain lift over the defender. Incidentally, Ogbeche is shorter than Cahill at only 5’ 8”

Ogbeche mainly plays as a striker but he can be deployed on the wings as an inside forward. His height or lack of it thereof makes me think that he would be a better option on the wings. In fact, I actually think that that is what we’ll see because of one Juan Cruz Mascia. The primary NEUTD striker, I suspect, will be the Uruguayan, Juan Cruz Mascia. It would be deserved too because Mascia is quite talented. While big, strong, and tall, Mascia doesn’t rely on his physique to play the game. He has skills in his arsenal as well.

His greatest qualities, though, will be his dribbling and finishing. The striker can finish with both his feet and his head, not something you see in all forwards. He is also an intelligent runner which allows him with his positioning whether inside the box or outside. He links up well with his teammates but make no mistake about it, he’s a central forward.

And you know what the best part is? He is only 24! This means that he’ll last through the entire 90 minutes. This shouldn’t be a quality in the Indian Super League, you know but sadly it very much is.

Statistically also, Mascia looks a very good transfer. He has appeared in 74 professional games and scored 18 and assisted 3 in those games. That won’t be a decent return if he was older but is enough to hint at talent because he’s only 24 and still learning.

Mascia should be a hit for the Highlanders especially if he’s backed by Ogbeche from one of the wings. The only thing is that they should get along. NorthEast United have brought in three 24-year-olds and Jose Leudo is second of those. Leudo is a central midfielder who doesn’t have a single attacking bone in his body. It would’ve been shorter if I had said that Leudo is a defensive, ball-winning, central defender but I wanted to make an attempt at creativity.

The point remains, though. Leudo will do one job for NEUTD – win the ball back. He won’t be required to launch majestic passes or initiate counterattacks. His job will be to win the ball back and lay it off through a simple pass to a teammate.

If that remains his job description, Leudo will do well. Statistics rarely ever do justice to this type of a player so I will not even try to tell you what they’re like. Augustine Okrah is an attacking midfielder. Now, whether you place him in central midfield, attacking midfield, or the wings depends on the type of coach you are. For me, Okrah is not fit to be in the central midfield position. I say this because Okrah seems to be one of those languid players you come across regularly. Players that, at the very least, look lazy when on the field.

There are players like Mesut Ozil too i.e. players who look lazy but then your impression is denied by their numbers such as distance run on the pitch. Maybe Okrah is like Ozil but I highly doubt it. This is why he’s a winger for me. If there’s any position other than the striker where you can rest in a match, then it has to be the wings.

Don’t get me wrong. Okrah has the skills. He has good pace on him, can dribble fairly well, and has that eye for the fancy pass too. He is in NEUTD because of his personal connection with Schattorie. They were supposedly together seven years ago at the Red Bull Academy of Ghana.

Even statistically, Okrah is not impressive. He has played a total of 38 games and only scored 4 times and assisted two times in that time. That’s one offensive contribution in more than every six games. Generally, attackers tend to at least contribute every third game. This is why I’m very sceptical about how good Okrah will turn out to be for NEUTD.