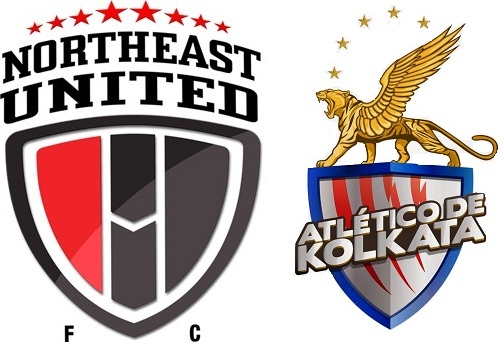 Passers or the Pressers in East Indian Derby?

Atletico De Kolkata welcome NorthEast United FC to the Rabindra Sarobar Stadium in Kolkata in what will prove to be a clash of two footballing philosophies – the visitors’ passing game and the hosts’ pressing game. The last time these two teams met, ATK took the game despite NEUTD being at home. It will also be interesting to see how each team copes since both of them dominated their last games only to drop points in the end. For the Indian Rojiblancos (something they’re called due to their affiliation with Atletico de Madrid), motivation can be had through the prospect of doing a double in the East Indian derby. Probably more important will be the chance to climb the table up to the second spot.

ATK’s campaign so far in the season has been chequered at best. They’ve had wins, draws, and losses spread across the entire campaign which means they there isn’t any clear form to fall back to while analysing their chances in the game. At the same time, their style of play in the league is very clear.

They approach games with a blend of strategy and technicality. In other words, they change their style to counter their opponents. What this means is that the chances of ATK getting some kind of a result from their games are always high.

Typically, against NEUTD, ATK can be expected to deploy the high press. High pressing strategies usually lead to lots of fouls. ATK, as a team, fouls the most in the league too. Obviously, this means that they’re card friendly (most carded team in the league). So, it wouldn’t be a bad bet to put down some money on at least one of their players getting carded.

ATK’s chances this time have taken a hit due to the absence of Sameehg Doutie, one of their most dynamic attackers. Still, they do have their marquee striker in Helder Postiga and the consistent Iain Hume to rely on. For NEUTD, stopping these players will be crucial since either of them is capable of domination and scoring goals. Their motivation will come from the fact that they’re bottom of the table and without a win in five games. In fact, they’ve lost their last four games.

One of the reasons for NEUTD’s poor performance is the fact that they’ve been unable to score goals. They’re actually the team with the fewest goals in the league to their name. In contrast, their primary striker, Emiliano Alfaro, is the leading goal scorer in the Indian Super League with 5 goals to his name.

This shows that Alfaro isn’t getting enough support from his teammates. It also shows how important Alfaro is to NEUTD. Notably, he was absent for two of their last four games, something that may have contributed to their four losses.

NEUTD are the exact opposite of ATK in that they have fouled the least in the whole league. This is mainly because NEUTD players don’t tackle which is evident in the fact that they have the lowest tackles in the league. Instead, their defensive tactics revolve around interceptions and unforced errors from the opponents.

Will it be the Tingmo or the Patishapta?

Even though NEUTD play football the “right way” and as much as the neutrals may want them to win, we don’t see them turning ATK over today. Their plays just don’t have enough quality and ATK are far too strategic to allow something like that to happen through only teamwork.

ATK’s high press will be a bit too much for NEUTD’s passing game even if the NorthEast United FC players can keep up with Atletico De Kolkata players’ stamina levels. Essentially, we’re predicting a slim win for ATK because they have more quality in their team. So, you can expect a score of either 1-0 or 2-1 in favour of ATK.