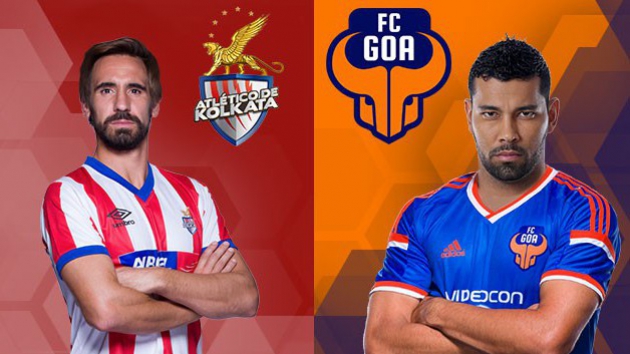 Ok, I’ll begin with an admission. I am nervous for FC Goa before this game. I saw how Kerala Blasters FC dismantled Chennaiyin FC yesterday and it has made me afraid for FC Goa. Atletico De Kolkata are a potential banana skin for the attacking juggernaut of FC Goa. If you’re one of those people who are always walking on clouds and weaving sunshine into glorious patterns then consider this.

FC Goa met Atletico De Kolkata twice in the league phase and didn’t manage to overcome them. In fact, they lost one and drew one. Granted, the first match came when FC Goa weren’t playing that well and the second one came when they had already qualified.

Moreover, Atletico De Kolkata got lucky in the second game with that god awful penalty call.

If you read my post on the four teams in ISL semi finals then you have a rough idea of how these two teams match up against each other. You would also be aware of the physicality of a relatively large and burly Atletico De Kolkata team.

More than some lightning and fateful mumbo jumbo, I’m afraid of that physicality because I’m not sure FC Goa can cope with it in front of a passionate away fan base.

I don’t need to tell you that I want them to win because their football is far more beautiful and enchanting than the drab affair Atletico De Kolkata bring to the table.

You may want to bring up Captain Fantastico but I don’t think he’s been all that fantastic. He has skill, technique, and vision but because of the way Habas the Henchman has set up his team, he doesn’t get much of a chance to do that.

Then, there’s the traditional centre forward Fikru Lemessa. Fikru actually relies on his physicality and fitness to be a footballer. He runs around with the kind of desire that you only see in kids and barges into people in the only way that a bull can.

I like all the running and dedication; I loathe all the pushing people around. Football is a contact sport but it is neither WWE nor Sumo wrestling. Combine physicality with football and I don’t mind. Sadly, Atletico De Kolkata don’t want to do that.

What Would Be Good Enough For FC Goa? FC Goa are away in this game. Does that mean that they’ll sit back and absorb pressure before breaking out? I don’t think so.

Even though a draw will be a fine result for them (especially since there is no away goal rule in the ISL), their form has been such that I think Zico would want them to win.

Besides, Atletico De Kolkata are not really in form right now. It would be best to send them hurtling out of semis right not itself.

I like the swashbuckling style of FC Goa. They remind me of Arsenal. I want them to continue playing like that. A little part of me wonders if they should be slightly more professional in this game and invite Atletico De Kolkata onto them before breaking.

There are risks there too. If they do that then they may invite Atletico De Kolkata too much and allow them to regain their form. It’ll be curious to see what Zico does. I don’t think he’ll change anything about how his team plays.

Who Will Play, Who Will Not! There may be changes in both teams’ starting line-ups in this game. Atletico De Kolkata’s changes might be because of injury and lack of fitness. Fikru is a doubt along with a number of other players.

You should expect Luis Garcia to be back and directing everything that Atletico De Kolkata does. Apart from this, Atletico De Kolkata, more or less, played their first team in their last game while FC Goa played a second string side.

FC Goa’s changes in the starting line-up will be a result of suspension and preference. Bruno Pinheiro, their ball playing midfielder – defender, is suspended so he won’t be playing in this or the next game.

I don’t expect Zico to start with Robert Pires like he did in the last game. In fact, I expect wholesale changes. People who will most probably not play include Pires, Miguel Herlein, Ranti Martins, Clifford Miranda, Jewel Raja, Laxmikant Kattimani, Peter Carvalho, and Edgar Marcelino.

I’m not entirely sure if Zico won’t stick with Edgar because of his good performance in the last game. People who will come in include Jan Seda, Andre Santos, Romeo Fernandes, Zohim Amiri, Bikramjit Singh, Mandar Rao Desai, and Miroslav Slepicka.

In defence, Narayan Das and Gregory Arnolin will come in for Peter and the suspended Pinheiro. You see what I mean by wholesale changes?

By the way, if you’re a neutral, you should be supporting FC Goa too. Why? Well, it’s because a spectacle like the final of the Indian Super League deserves football over physical athletes.

This happens because it’s much easier to make a person fit and burly rather than impart skill to him. Technique is often the last thing because only a person who has been trained from a young age will display it.

I know where I stand. I stand with the development of Indian football.