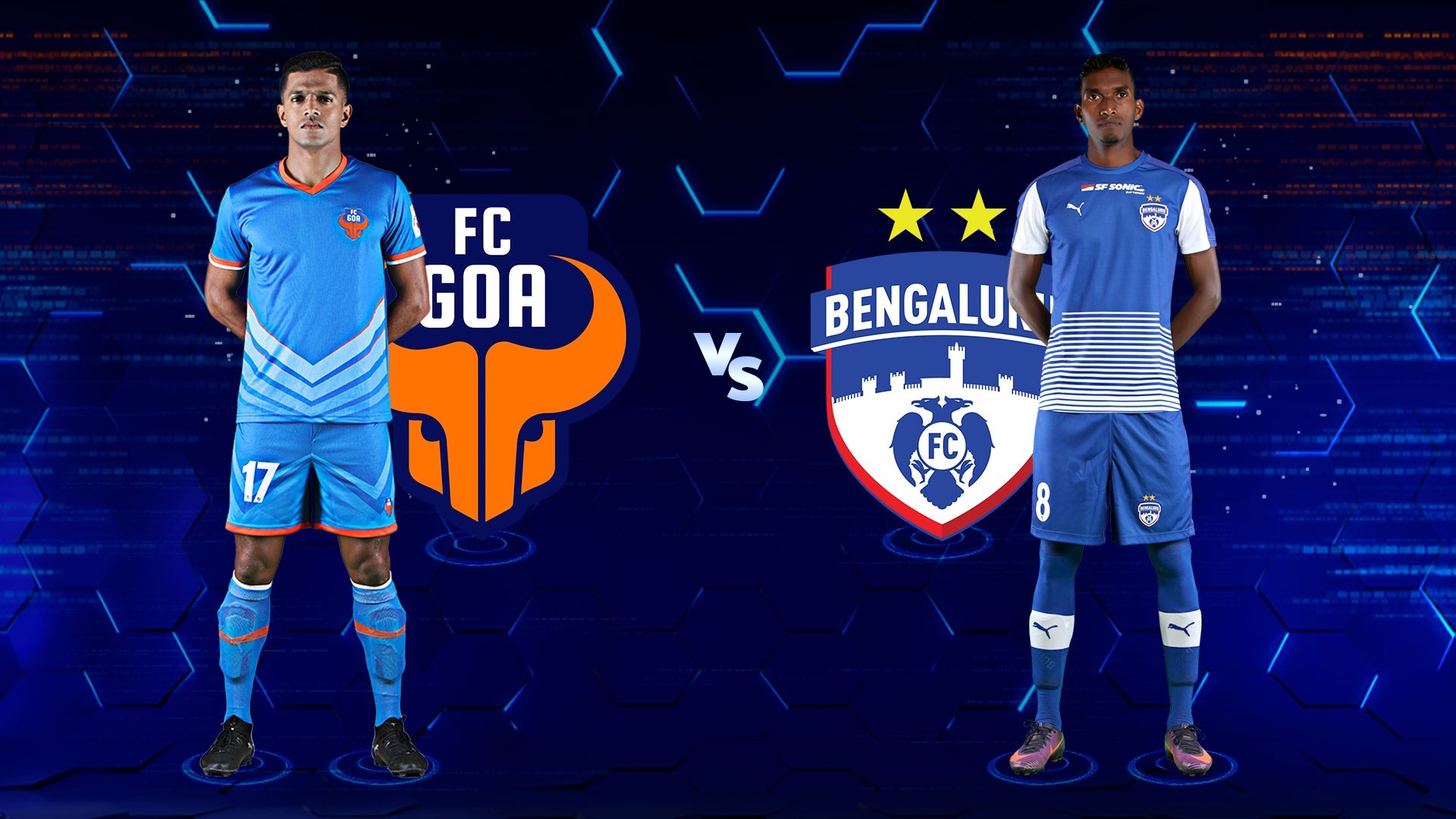 Two Styles of Football to Decide the Age-Old Debate in Football? Of course, both teams will tell you that they do the other thing too – Bengaluru FC will claim that they play entertaining football while FC Goa will say they want to win. At the end of the day, you can still see what these two teams are about. The only problem? Laxmikant Kattimani can prove to be the wildcard in this game in the sense that his sheer ineptness can ruin all possible narratives anyone can weave.

Head-To-Head Between Goa and Bengaluru

I don’t do head-to-heads like everybody else. You don’t really learn much by being told how many times which team has won in the past. Statistical head-to-heads, though, can reveal a lot about the game. They’re fun to delve into too. Formations first, shall we?

Sergio Lobera, generally, plays the 4-2-3-1 formation with Goa. This formation is possession centric because it encourages neat triangles all over the pitch, especially when players are mobile. Albert Roca, on the other hand, puts out a 4-3-3 formation with Bengaluru. This is a very versatile formation but the way Roca sets it is very narrow. Narrow 4-3-3 formation supports Bengaluru’s direct style of play. It also allows for better pressing because every player has an accomplice or two near him. When 2 to 3 people press together, it becomes easier and more effective. High press is a team game.

Both teams’ formations reflect in their stats as well. Goa, the possession focused team, is the highest passer in the league with 1123 passes per game. Bengaluru, the direct style team stands fifth in the league with 869 passes. This means that Goa has around 127 passes more than Bengaluru PER GAME! Touches on the ball are associated with how dominant you’ve been in your games. Both teams’ styles of football have resulted in them dominating their respective games. Goa has suffered due to Kattimani or they would be as out of sight of other teams in the league as Bengaluru is right now.

Bengaluru’s domination of its opponents and direct style of play is proven by the number of shots it has taken. It has the highest (32) shots in the league. The fun bit, though, is that Goa is 2nd in the league with 26! Surprisingly for a possession based team, Goa has the highest tackles (77) in the league. I don’t know how to explain this because Bengaluru stands 9th in the league with only 44. Goa’s high tackles may be because of the prolific Ahmed Jahouh. Bengaluru, despite its high press, doesn’t tackle a lot. Instead, it likes to close down passing lanes and force opponents to make a bad pass or bad touch. It’s a kind of passive pressure that it very effective when done right.

Like I said earlier, Goa have been unlucky in their last two games. They made it through the first one but in the second one it caught up with them. Not only did Kattimani skew stats and result but they also had a legitimate goal ruled offside. That goal could’ve changed things in the game but it didn’t happen. Between Kattimani and that referee call, Goa have been shoehorned into the mid table team when they play like a top table team.

We all know how Bengaluru has taken the league by storm. They’ve been on a roll and they’ve taken down two decent teams in the league. However, remember that those games were at home. Plus, Bengaluru have yet to face teams like ATK and Kerala Blasters FC.

In other words, they’re yet to go up against a really good ISL side. Even though Goa doesn’t fall in that category yet (Kattimani’s blessings), I do think they’ll be a good test for Bengaluru on the evidence of how they’ve played till now. In my opinion, this is Bengaluru’s first real test away from home, against a good team whose style actually counters theirs directly.

What Can FC Goa Do To Win This Game? If Goa bench Kattimani, they have a very good chance of winning this game. That’s the first and most basic step. Either they do this or they check Kattimani’s bags before the game begins. Take away everything that distracts him. Lock him up in a dark room with nothing but a video reel of his mistakes at half time to buck him up. And while they’re at it, they should get him a sport psychologist because he needs counselling on how to be focused.

To win, Lobera also needs to get his 5:6 ratio of Indians to foreigners right. I don’t think it’s a good idea to keep Bruno Pinheiro on the bench in favour of Manuel Arana. Pinheiro absolutely has to be on the pitch in this game for his height and defensive prowess. He needs to be in it from start to counter the Paartalu threat as well. While Pinheiro isn’t very physical, he has an astute football brain. This means that he may not be able to physically subdue the muscular Paartalu but he can subdue him by blocking his runs completely.

To bring in Pinheiro, one foreigner has to be pulled out. As mentioned, I vote Manuel Arana. In his position, I want Brandon Fernandes to be reinstated to the starting line-up. He had a good opening game and he can deliver in this game too.

What Can Bengaluru FC Do To Win This One? Bengaluru have to be the favourites for this game simply on the back of their form. They’ve had the most consistent team in the league till now. Their team has cohesion because it hasn’t been changed around too much. Their team is also the fittest, although I don’t have to stats to prove this.

They also have a unique tactical advantage because they deploy players that can swap their positions very well. This disrupts the opposition and gives them an attacking edge. It directly affects man marking focused defensive strategies. For example, their front three can all swap, their full backs can both play both flanks and their midfielders can swap too. That’s a lot of fluidity in their team that will help them not only today but also in the other 15 games.

They will also need to foul less. This is particularly true for their central defender John Johnson. If he gives away too many free kicks in dangerous positions then Lanzarote can make them pay with his finesse. Johnson is the 2nd highest fouler in the league with 7 fouls. While he can’t foul so much, he will still need to shut down Ferran Corominas. Corominas has a knack for getting his shots on target and that’s always dangerous. He’s 100% by the way.

There are three player matchups that stand out for me between these teams. Each of those matches is direct and very crucial for both teams. This game will be won or lost in midfield which means Ahmed Jahouh and Erik Paartalu become crucial to their respective teams. Jahouh has more experience and skill in his game but Paartalu is easily the more physically intimidating of the two.

Jahouh edges Paartalu in stats though. He is the highest passer in the league (186), has the most touches in the league (221) and even has most tackles in the league (21). Paartalu, however, has two goals to his name and a scary physique by Asian standards. For all you know, Jahouh shuts down Paartalu in midfield only for him to move forward and get a goal from a set piece. Each to his own. Jahouh and Paartalu’s partners will be equally crucial but for different reasons.

The reason for this is that his opponent Lenny Rodrigues is very good at intercepting passes. He’s the 3rd highest in the league with 6 in 2 games. Bedia will have to make sure he doesn’t give away possession and Rodrigues will have to try to get the ball from him.

On the flip side, Bedia will have to shut down Rodrigues too because he’s Bengaluru’s highest passer with 101. Even though that is 20th in the league, it would go a long way in favour of Goa if they can shut him down. This is the fun matchup. Lanzarote is the creative force for Goa while Miku is the game changer in Bengaluru ranks. Both teams will need these players to deliver to take anything from this game.

Both, by the way, are tied highest shot takers in the league with 7 each. Lanzarote, though, gets more on target (5) than Miku (3). How much these players are involved in this game will decide which team takes precedence.