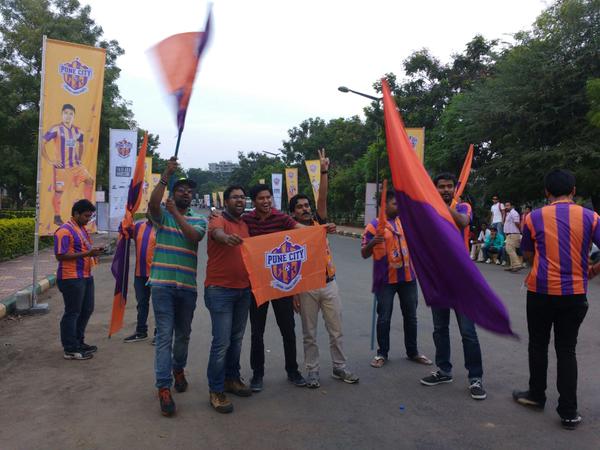 Of the first round of Indian Super League 2015 season, this is the match that I was looking forward to most. Yes, it wasn’t FC Goa’s game nor was it the game between Chennaiyin and Atletico. It was this one because Mumbai City FC’s squad excites me. Moreover, even FC Pune City’s squad isn’t all that bad.

While Mumbai City FC’s squad is very attacking in personality, FC Pune City’s squad is more balanced. However, the astuteness that Nicolas Anelka has shown in the transfer market is something that has shown me that he has a very good managerial perception. So, I really want to see what his team will be able to do on the pitch. In contrast, I am still not convinced with David Platt. There were a couple of interesting placements by the two managers in defining their first elevens.

David Platt left Adrian Mutu on the bench on account of a minor niggle and instead put Tuncay Sanli in the front line with support from Nicky Shorey and Manish Maithani from the wings.

He also left Eugeneson Lyngdoh and Jackichand Singh out of his starting line-up because of his international duties.

Nicolas Anelka went with Frederic Piquionne as his forward of choice as opposed to himself or even Sunil Chhetri (same reason as Jackichand and Lyngdoh), something that I didn’t agree with so much. The good bit was that he backed Piquionne up with Andre Moritz, Sony Norde, and Gabriel Fernandes. There was enough creativity in the attacking midfield to cover up for Piquionne limitations.

The really good bit was the formations of the two teams with both them going with an attacking setup of forward backed by forward wingers with Mumbai having a central attacking midfielder too.

Mumbai City FC Begin the Game on the Front Foot

Mumbai City FC started the game on the front foot with Piquionne leading the charge by reaching the by-line and cutting the ball back. He had a teammate in the middle of the box who took a snapshot straight at the keeper.

The Mumbaikars were getting a lot of joy with long balls over the top of the Pune defence. They won a few freekicks as well as connected with a few of those passes well within the first 10 minutes. Regardless of how much Mumbai City FC dominated the first few minutes, it was FC Pune City that broke the deadlock against the run of play.

The goal was a result of fast counterattacking football. Pune brought the ball forward from the left side of midfield led by Lenny Rodrigues who came up with a sumptuous through ball to Nicky Shorey.

The ball then travelled from the left to the right with a good pass from Shorey to Israil Gurung.

Gurung dropped a shoulder, kept his head, and released a pinpoint cross for The Mandarin (Tuncay Sanli) to attack. For the next 20 minutes or so, Mumbai City FC kept trying to go over FC Pune City’s defence as opposed to going through them.

However, it was going to pay off for them later in the 34th minute.

Mumbai City FC had a great chance to level the score when Frederic Piquionne controlled a long ball and put in a great cross to Norde. Norde, however, could only hit the woodwork.

It wouldn’t matter though because the ball bounced back into play and went to Ashutosh Mehta dropped in a peach of a cross into the middle of the Pune box. The cross curled, dipped, and looped straight onto the head of Piquionne who nodded the ball into the goal. FC Pune City 1 – 1 Mumbai City FC

Mumbai almost took the lead five minutes later when Gabriel beat his marker and cut the ball back to Andre Moritz who hit the shot well but it was straight at the keeper. There a few chances that Mumbai City FC created after going down by a goal. By the end of 45 minutes, they should’ve been up by at least one goal.

Second Half Begins With Heavy Focus on Tactics from Both Teams

In the half time window, I was hoping for Anelka and Mutu to come onto the pitch although I felt that both of them coming on would be unlikely.

The second half kicked off with the team exchanging punches. Even so, I felt that FC Pune City were getting the better of that exchange. Around the 50th minute, Didier Zokora got his customary yellow card. He is very friendly with cards; gets them whenever he can. I swear if he wasn’t a footballer, he would’ve been a Hallmark salesman – Didier “Hallmark” Zokora!

It all came to a head in the 56th minute when FC Pune City scored their second through The Mandarin. He scored with another header. The goal was a redux of the first strike with Israil Gurung providing the cross. Gurung’s cross this time, like last time, was top quality! FC Pune City 2 – 1 Mumbai City FC Having done his job, The Mandarin was taken off by David Platt. Who did he bring on? He brought on Mutu.

That’s not a bad player to bring on with 60 minutes gone. Anelka played his hand by bringing on Selim Benachour for the wayward and ineffective Moritz.

It didn’t make a lot of difference because luck favoured FC Pune City. Israil Gurung ran down the right wing and tried to put in another great cross.

However, as Keegan Pereira tried to block the cross, the ball snicked off his boot and looped over the head of his keeper into the far corner. It was an unfortunate goal. FC Pune City 3 – 1 Mumbai City FC That goal meant that we would see Anelka and Mutu on the pitch at the same time.

And so it was with Anelka coming on in the 75th minute for Juan Aguilera Nunez.

Despite going down two goals, it was still FC Pune attacking and Mumbai City FC looked quite listless.

There was improvement when their manager came on to the pitch, though.

Once Anelka came on, everything was being run through him. He was actually having an impact as well with some nice passes, crosses, and one-twos. Even so, it wasn’t to make that much of a difference because there were to be no more goals.

This was easily the most tactical game of the three we’ve see till now. The game would’ve probably ended level if it wasn’t for Gurung and Sanli’s almost telepathic connection. It’s good to see an Indian player having such a positive understanding with a world-class player.

On the other side, I think picking Moritz in the first eleven came back to bite Anelka in the arse because he was unbelievably unproductive. Essentially, the teams were well matched tactically and it was only the performance of certain players on the day that proved to be the difference.

Pune’s Gurung and Sanli clicked while Mumbai’s Norde and Moritz didn’t. Like the other two Indian Super League 2015 games, this game was also decided on the wings. Remember, Pune actually had three fullbacks on the field with Shorey plying his trade in the midfield. So, when Gurjinder Kumar was having a tough time, Pune switched him with Shorey and had a stable defence again.

It’s also worth remembering that both teams were lacking some key players. I would generally expect both Lyngdoh and Chhetri to start for their teams or at least make a difference some time.