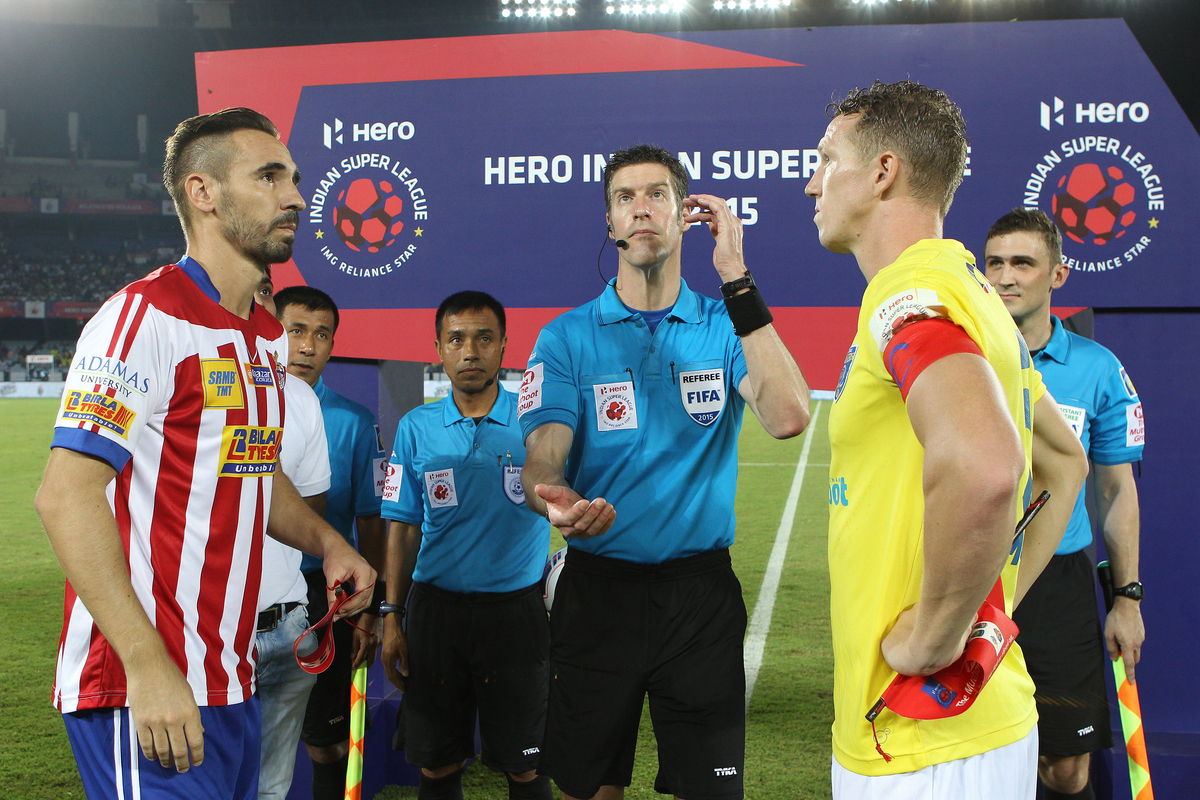 Well, what do you know? I predicted a poor season for Kerala Blaster FC and they’re well and truly proving me wrong. When the predictions go wrong, I’ll be the first person to raise my hand and eat the humble pie, so hold on to your horses, Sir Shadowfax.

In case you don’t know how I was wrong, Kerala Blasters are sitting pretty in second position in the Indian Super League 2015. However, I will remind you that Kerala Blasters have only played the minnows Northeast United FC and Mumbai City FC who are still to find their feet. This will be their first true test against the reigning champions.

No one’s surprised that Atletico Kolkata are third in the league and I expect them to go top of the heap after a win this game. Why am I predicting an Atletico Kolkata win? Well, you can thank Sidwillrockyou who asked me to do that. I am pretty sure that he didn’t mean a prediction in the match report itself but hey, I don’t have time for previews this season so there it is. I predict Atletico Kolkata to win by 3 – 1. In terms of why I picked Atletico Kolkata for the win is simply that I liked their team over Kerala Blaster’s team.

There seemed to be more stability, strength, and power in Atletico Kolkata’s team. More importantly, they also had the home advantage. There were lots of changes from Kerala Blasters FC with Peter Taylor playing both Sanchez Watt and Chris Dagnall.

Kerala Blasters back three also looked good in the form of the tall Indian Gurwinder Singh, Bruno Perone, and Peter Ramage. I expect their wingbacks would bomb down the flanks and give Habas the Henchman a good headache.

Atletico Kolkata’s team, on the other hand, looked tacked on as opposed to settled. Not only did they change their defenders but also their keeper. Defenders need a run of games together to build an understanding. Now, I’m not saying that the Salt Lake stadium will be like the Leaky Cauldron (although it will be a cauldron with Pele in the house). I’m just saying that I expect a sense of panic and a certain lack of stability in Atletico Kolkata’s defence.

Let’s hope Atletico Kolkata don’t make me look like a chump in front of our dear reader Siddharth. First half began with both teams exchanging feints and potential threats but the first real chance fell to Atletico Kolkata through a cracking long shot.

The shot was excellent. It swerved, curled, and smacked against the cross bar. The shot was taken by Javier Lara Grande.

It wouldn’t matter though because Atletico Kolkata would take the lead in the following minute.

The move started with a long ball to Iain Hume, who was running the channel between the full back and the centre back.

His first touch was like that gourmet chocolate cake that I always dream off every day – smooth and capable of melting hardest of spirits. It allowed him to cut in and with the defender turned he unleashed a left footed snapshot. Stephen Bywater, however, saved it but the ball rebounded to Arata Izumi who continued his good form and whipped the ball into the net on the stroke of 6 minutes. Atletico Kolkata 1 – 0 Kerala Blasters FC Kerala Blasters got a chance to level the score through a scramble in Atletico Kolkata’s penalty box but the player in yellow could only scuff a limp ball goalwards.

Despite that chance, it was still all Atletico Kolkata in the first half. They were attacking with the kind of verve that I expected Kerala Blasters to display while Kerala Blasters’ defence looked uncertain and unstable.

In fact, Atletico Kolkata were so dominant that they were putting on a show for Pele and their fans. There were back heels as well as cheeky flicks from their players.

All their attacking drive was being led by Hume, who seemed truly inspired against his former team.

It made me wonder if this was to be a game that Hume dominated.

I expected Kerala Blasters to show more creativity in this game but they looked as woefully flat as a beer bottle left open for more than 60 days in pea summer. I haven’t had that but I have had unbelievably warm beer in peak summer, so trust me I have some idea of what I’m talking about.

Near the end of the first half, they did get a couple of good chances though.

The first was a long range shot as good as Lara’s earlier shot if not better.

This one bent and dipped more and was a volley to boot.

The next chance came on the back of a mistake from Atletico Kolkata’s Nallappan Mohanraj who just ran on the ball as opposed to running with it.

The ball dropped to Kerala Blasters’ Rahul Shankar Bheke who made a mess of it. Bheke did all the hard work well by beating the defender but when it came to crossing, his effort was downright embarrassing. With Dagnall in a wonderful position in the middle, the ball was driven through too hard by Bheke. Kerala Blasters continued their poor performance deep into the second half. Within a few minutes, Atletico Kolkata doubled their league through Lara. Lara, who was denied by the woodwork in the first half made no mistake this time out.

Atletico Kolkata’s build up for this goal was top class and a far cry from how they played last year. The goal was set up by Iain Hume again, this time outside the box. He dribbled in the centre and released a simple but effective toe poke to Lara.

Lara dribbled too, beat his man, and struck a right footed shot into the far corner of the Goal. While the ball took a little deflection which helped it along but the goal was still beautiful. It was the 25th goal of the Indian Super League 2015 season, in case you are interested in some mundane statistics. Atletico Kolkata 2 – 0 Kerala Blasters FC

Atletico Kolkata’s second goal came in at 53 minutes. You would normally expect the team that is two goals down to mount a fight back or at least try to mount one but Kerala Blasters seemed so limp that it seemed like they were all 80 year olds trying to do relive their younger days.

Atletico Kolkata deserve some credit for that because they managed the really well. They essentially defanged Kerala Blasters without actually mailing them with their physical play. Instead, they finessed them into submission with a special focus on organisation and stability.

Need to eat my earlier words, I do. Atletico Kolkata were nowhere near unstable and uncertain in defence. They were resolute, solid, and very sure of themselves. The rest of the second half was so slow and dull that I think I had me a little nap in the middle.

Kerala Blasters FC Halve the Lead To Make It Interesting I would’ve eaten my words, if they hadn’t suddenly lost the plot. At the stroke of 80 minutes, Atletico Kolkata (I think it was too easy and they were getting bored) decided to gift Kerala Blasters FC a goal.

The goal came on the back of a good cross from the right side by Victor Herrero Forcada or Pulga. The cross was flicked on and almost into the goal by CK Vineeth. The goal was stolen from him by Dagnall who got to the ball and put it in the net before it could cross the goal line. Atletico Kolkata 2 – 0 Kerala Blasters FC.

Despite the Goal, it would be too little too late. Kerala Blasters FC kept trying to score the equaliser spurred on by their sudden change of luck but it turned out to be futile in the end.

The game was over when Kerala Blasters FC went down to ten men on account of Mehtab Hossain receiving his second yellow card of the game. The reason why Kerala Blasters FC lost today is that they were too narrow in how they setup.

The idea from Taylor was that the wingbacks would bomb forward to join the attack but it was…how can I say it nicely without using words like stupid… let’s see… it was overly optimistic of Peter Taylor.

His team was away to the most intimidating stadium in the country and he for some reason thinks that his wingbacks would be able to attack.

His second mistake was that he only had three midfielders. I think he wanted to use the pace of Watt and Dagnall but it didn’t pan out because there was no one in Kerala’s team to release a ball like that.

Josu Currias (the commentator unbelievably compared him to Cesc Fabregas) was probably who Taylor was relying on to spot and come up with some through balls for Watt and Dagnall to exploit. However, Josu was largely ineffective because Atletico Kolkata had five men in their midfield. Even Cesc Fabregas wouldn’t have been able to have an impact on the game in a 3 against 5 situation.

I was uncertain of Peter Taylor when he was announced by Kerala Blasters. I was critical of Kerala’s squad when I did a review on them. Now, in one match they’ve shown everything that I pointed out. I questioned their need for 9 defenders. They had five defenders in this game and not enough midfielders which is why they lost.

This defeat is the sole responsibility of Kerala Blasters’ manager and no one else. He needs to put his arm up and take the blame.

Habas the Henchman, in contrast, put in another master class managerial performance. His team was well set up, showed none of the uncertainty that I expected, and paced the game very well. After Atletico Kolkata took the lead, they managed the game so well that it was reminiscent of Italian teams in the European Champion’s League. This was a perfect performance for Atletico Kolkata and they deserve to celebrate and get themselves some frothy, bubbly German glass of beer (no rewards for guessing where my mind is).