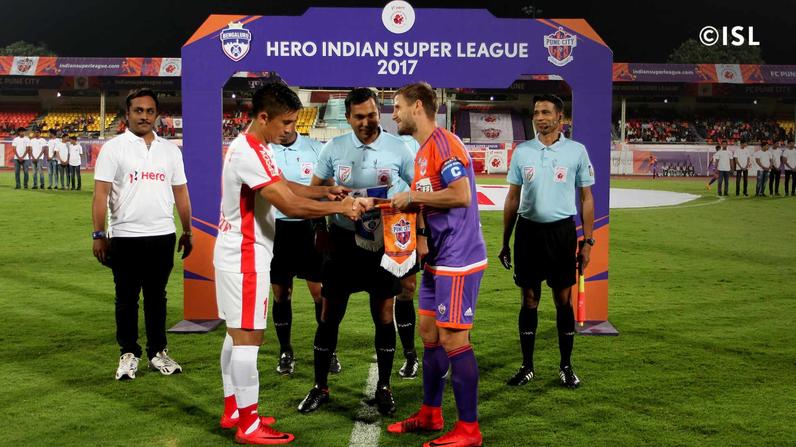 Have no doubts about it – Bengaluru FC will be in the semi-finals this year. Whether they win it all in the end or not cannot be predicted but they will definitely make it to the playoffs. No team in the league exhibits the kind of solidity that they do. No team has even showed the kind of tactical agility that Bengaluru has shown in the last five games. The way they won this game is a testimony to how versatile their tactical playbook is and how evolved their teamwork is. Before I explain why I made that statement, though, a word for FC Pune City. I don’t know why so many people were predicting a Bengaluru FC stumble in this game. They probably saw how FC Goa outdid Bengaluru FC and called this one in favour of FC Pune City because Pune also play a passing game. However, these people failed to see the gulf in the passing proficiencies of Goa and Pune.

Let me be clear here, Goa are the best passing team in the league and even they only scraped a victory against the highly organised and tactical Bengaluru FC. Not many teams in this league will be able to pass the ball around Bengaluru and we’ve seen that till now.

Pune failed to emulate Goa’s victory against Bengaluru in this game simply because they chose to not try. I said Popovich will treat that Goa game as a blueprint in my preview. I was wrong. I was very wrong. Popovich, instead, decided to find his own way. Maybe he knew that his team can’t pass the ball like that? My problem is that that is bravery couched behind a defeatist attitude. The best way to beat Bengaluru is to pass the ball through them.

This decision is precisely where Popovich erred. Instead of attacking through passing like Goa did, Popovich decided to go for stability. I get why coaches do that. Coaches would prefer a nil-nil draw over a high scoring draw. In my opinion, Popovich made two crucial mistakes. Popovich dropped Marcelinho for Lucca in the attacking midfield position. In fact, because of the way he plays, Lucca was more of a false number 10. He was a number 10 who dropped back in midfield and operated from there.

Popovich picked Lucca expecting the high press. He figured that Lucca’s passing would see him dodge that high press. The problem was that Bengaluru didn’t do high press. They sat back and blocked passing lanes. Thus, Lucca’s biggest strength – passing – was nullified. Bengaluru FC didn’t press high up the pitch because Roca saw another weakness in Pune City. It was Baljit Singh Sahni in the left-back position. Putting him in that position was less of a mistake from Popovich and more of a, “I don’t have any other option”. He could have put Rafael Lopez in that position but why would you shunt your best defender into that position. In hindsight, he should’ve.

Popovich was probably very happy with the first half because Sahni’s versatility was paying dividends. Sahni did well against Bengaluru’s attacks on his flank. He snuffed most of them out with his typical terrier like tenacity. The problem was the yellow card he picked up. Sahni always picks up yellows. He’s prone to them. He loves them so much that I think must be a minion deep in his heart with an even deeper love for bananas (not like that, you dirty minded bum!).

He picked up his first yellow at 45 minutes and quickly followed it up with his second at 56 minutes. While Sahni’s dismissal made a huge difference, it wasn’t the only reason why Bengaluru won. I posit that Bengaluru would’ve won anyway. This brings me to their strategy and tactics.

The Bengaluru FC Away Strategy In the intro, I claimed that Bengaluru are the most tactically versatile team in the league. Why did I say that? I said that because they pinpoint defensive weaknesses in their opponents and then set up to take advantage of those weaknesses. While watching this game, I was confused. I was confused because I expected Bengaluru to do their high press but I didn’t see it.

I even questioned whether Bengaluru’s high press against Delhi was an anomaly, a one-off. It wasn’t. By the second half, I knew why they didn’t start by pressing up high. High presses are incredibly tiring for players. They’re very difficult to keep up throughout the season.

The fact that Barcelona used to it in each and every match of the season is why they’re special. Their passing and players made them special but nothing did it more than their persistent, insistent, and consistent high press in each and every game.

Roca didn’t get his team to press up high because he knew what he was going to do, even before this game began. He was going to put pressure on the left flank of Pune. Nearly every Bengaluru attack came down their left flank. If it was Lopez in that position, they may have dealt with it but it was Sahni and he wasn’t Lopez (I love circular logic, don’t you?).

Because Roca could pressurise Pune in a weak defensive position, he didn’t need high press. High press is more like “press in case of emergency”. This is why they started doing it in the second half. They were a goal down and it was an emergency. But, the beauty of the entire thing is that their initial strategy is what worked. They got Sahni sent off for persistent fouling.

There’s another angle to this. Bengaluru and Roca held back the high press because they had faith in their fitness levels. Popovich, on the other hand, didn’t consider his team’s fitness levels. Bengaluru players are generally amazingly fit. They’re fitter than most other squads in the league. Additionally, they also got more rest than Pune City players. So, Roca didn’t press high because he thought he’ll do it later. His team was conserving energy through the entire first 45 minutes!

So, Bengaluru pulled a tactical one over Pune City. This is why they won. Roca saw the weaknesses i.e. the left back and fitness levels, and set his team up to exploit those weaknesses. It was subtle and yet game changing. As you can see, I’m very impressed with his tactics. On to the key moments in this game then – there are 5 by my count. The first key moment was the disallowed goal from Sunil Chhetri. It was disallowed, allegedly, for a hand ball. Replays showed that it wasn’t a hand ball. It did look like a clear handball in normal speed, so you could forgive the referees for their mistake.

If Bengaluru hadn’t scored their goals and won the game, that incident could’ve been far more crucial than it turned out to be in the end. Let me reiterate. It wasn’t a hand ball. The yellow card is unfair in hindsight. If you want to argue, drop a comment. The cross for the goal was as good as that superman dive from Khan. The cross came from Isaac Vanmalsawma. He received the ball on Pune’s left flank, checked back onto his right foot, and crossed straight onto the head of Khan. Incidentally, Isaac was playing through pain. That makes this cross even better! Sahni shouldn’t have put himself in a position where he could be sent off. There are ways of defending without hacking off your opponent’s legs or pushing him over. There are ways to do this without being overly physical. Sahni needs to learn this.

It would be especially galling for Popovich and Pune fans because Sahni had a chance to become wary. He was sent off through two yellows. There were 11 minutes for him to become safe. He didn’t. Popovich didn’t tell him to. He deserved to be sent off for that.

Bengaluru Fight Back With Three Goals The Sahni sending off made it easier for Bengaluru. If you will note, two of Bengaluru’s three goals came from the left flank. They equalised through Miku receiving a cut back from Edu Garcia. Garcia reached the by-line and cut the ball back for Miku at the near post, who finished in a single touch.

The second goal was also from Miku and it was a cheeky finish but it came from a deflected shot. The assist for the second goal also went to Edu Garcia who hit the shot that deflected to Miku. The third goal was Chhetri’s as he drove towards the box from the left flank. He played a one-two with Toni Dovale and dinked the ball over the onrushing keeper.

Bengaluru came with a plan to Pune and they implemented it with 100% perfection. They didn’t play the way I had predicted in my preview but that is precisely why I’m sitting in my chair writing a blog post while Roca is the coach of the most successful team in India, in recent years. I tip my hat to you sir, for your tactical master class.