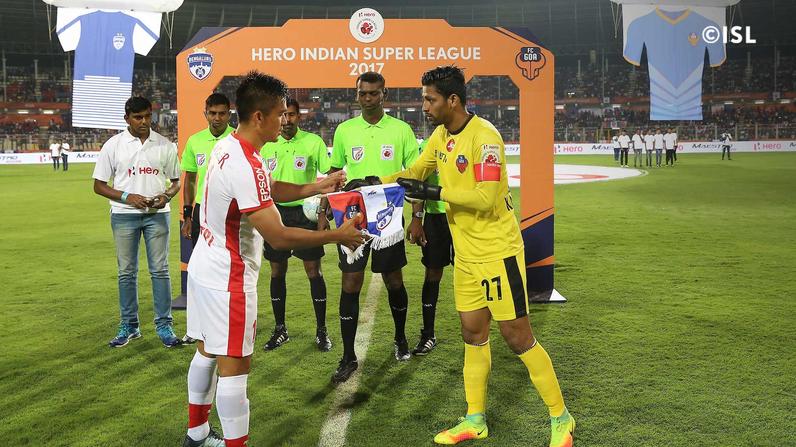 FC Goa won this game by 4 – 3 against Bengaluru FC at home. They should’ve been out of sight after the first half. It is credit to Bengaluru’s fighting spirit that they came back into this game, not once but multiple times. It is Goa’s poor defending that led to those comebacks but then again it was Goa’s fighting spirit that saw them getting ahead time and again. It was back and forth, people. If you didn’t watch it, then I feel sorry for you.

It was also evidence of the fact that both teams’ styles of football are direct opposites. As mentioned in my preview for this game, Bengaluru’s direct and high press style is a counter for all possession style teams including Goa. Similarly, if you want counter direct style of footsy, you want to play possession football. However, the teams needed to be set right for this to come off. Surprise! Surprise! Both teams were set up just right!

Goa Do Right; Goa Do Wrong Again, I’ll draw from my preview here. Goa needed Bruno Pinheiro in defence to counter the threat of Erik Paartalu. This meant benching one of the other foreigners in the team. I had suggested Manuel Arana in favour of Brandon Fernandes and so it proved to be. Pinheiro and Fernandes started while Arana was on the bench. I had also suggested benching Kattimani and I stand by it. Although Kattimani didn’t have any high profile errors in this game, Goa could’ve saved one goal (the one that went through his legs) if he hadn’t played.

Personnel aside, Goa also needed to beat Bengaluru’s aggressive high press which they did very accomplishedly. They also needed to nullify Miku, Paartalu, and Rodrigues. Tactically, Goa didn’t start to nullify anyone. They just managed to nullify Lenny Rodrigues by the virtue of his early yellow card and their natural game. The yellow card forced him to be more careful which meant less closing down and less interceptions (his strength).

Goa also nullified Sunil Chhetri completely even though they failed to stop Paartalu and Miku. Bengaluru players were woefully behind in tackles before this game. They did tackle more in this game, as I had hoped they would to counter Goa. Now, they have two players in the top 20. Earlier, they had none. Along with more tackling, I had hoped that they would stop their tactical/strategic fouling.

There was no sign of that happening in this game. In fact, they got worse. Of the top 8 foulers in the league, would you believe that Bengaluru have 4 in their team? The worst of this lot, of course, is John Johnson. I don’t understand why he’s lauded in Bengaluru. He fouls too much, plays recklessly, and rarely shows class even in a shot glass. He could’ve been sent off twice in that first half, he was that bad.

Bengaluru also failed to shut down Goa’s possession game which is why they failed to win this game. And, they gloriously failed to stop Ferran Corominas in this game. I think this was an oversight from Roca. They chose to be physical and aggressive with Corominas, expecting him to get cowed but he didn’t. Instead, it probably made him more determined.

The Bengaluru team was unchanged as expected.

Before Gurpreet’s Loss of Composure The early stages of the game were cagey. Both teams were fouling a lot which I attribute to nerves and throwing down of the gauntlet of infinity. Even at this stage, you could see that Bengaluru players were being overly physical and virtually reckless.

At the forefront of this were, of course, the Bengaluru hooligans John Johnson and Erik Paartalu. Paartalu, at least, has skill in his locker. Johnson just occupies space and throws himself about. He’s your traditional English defender – the kind that breaks legs and end careers. Not a fan, as I’m sure you’ve figured out by now.

This game did see a keeper going AWOL and surprisingly it wasn’t Kattimani. Kattimani actually did well early on. His save off the Paartalu header was decent. Corominas took the spotlight in this game with his special opening goal. He dribbled from more than 40 yards into the box, beat two guys, and stroked a precise right footed shot into the far corner. The finish was class and the goal was solo even though Edu Bedia got an assist.

Bengaluru struck back immediately, though, with Miku. The ball for Miku came from Paartalu. Paartalu dinked the ball over the Goa backline first time and Miku latched on to it with a wonderfully timed run. His shot went through Kattimani’s legs from an acute angle. Keeper is the favourite from such positions. The fact that Miku scored is partially on bad keeping from Kattimani. Ali allowed Miku to run and, hence, should also shoulder the blame here.

Then came a game saving block from Ahmed Jahouh on Sunil Chhetri who only had the keeper to beat. Jahouh leapt out of nowhere and managed to block the Chhetri shot. To be fair, a keeper would’ve saved that central shot but with Kattimani in goal, you never know. So, Jahouh did well to block it.

If Corominas’s first goal was class from the solo perspective, his second was even better from the team’s perspective. It was a practiced set play that was quite bold from Goa. It was a deep, deep free kick that was tossed into the post for Pinheiro to head down into the path of onrushing Corominas. Corominas’s run was perfectly timed and his finish composed.

After Gurpreet’s Moment of Madness At this point, Bengaluru were struggling in the game. They were probably surprised at Goa’s retaliatory physicality. They didn’t expect Goa to fight back. This affected Gurpreet Singh Sandhu the most, considering his reaction. A 50-50 ball was contested by Gurpreet and Manuel Lanzarote. Right after the tackle, Lanzarote slyly tread on Gurpreet which pissed him off. Gurpreet rushed Lanzarote and the latter took advantage of this by falling over. Gurpreet was sent off for raising his hand to Lanzarote’s head.

This is an automatic send-off, people. There’s no interpretation here so can we end the debate? Lanzarote converted the penalty to make it 3 – 1 for Goa.

Tactically, Gurpreet’s sending off was crucial because it killed off Bengaluru’s attempt to press Goa high. They were struggling anyways with their high presses against Goa’s passing skills and being a man down put a stop to it altogether. Bengaluru weren’t done though because Goa had to customarily press the big red button of self-destruction. Goa’s tendency to self-destruct will be an on-going theme this season. They play excellently in the first half and then simply lose focus in the second. I can only hope that this is because of lack of fitness. Before the season began, Sergio Lobera categorically stated that his team is 4-5 weeks away from full fitness. That period hasn’t passed yet. I’m inclined to think it is actually a fitness issue.

In this game, Kattimani made his customary error. This makes me wonder. How long do you think Sergio Lobera will keep Kattimani in the team? It’s high time he dropped him right? I’m gonna try something here. Let’s do a poll on whether Lobera will ever drop Kattimani. If you want to tell us when, feel free to drop a comment.

Kattimani’s error was to come for a ball that was not his to come for. He came, he failed, and Paartalu conquered. You can almost bet on Paartalu to get a set piece goal. He’s that consistent, especially against Indian defenders.

It wasn’t just Kattimani, though. Goa also looked lacklustre and lazy in the second half. It was almost like they thought the game is won. Now, why would you think that when you’re 3 – 1 up against 10 men I wonder? Obvious yet not obvious for some.

Then the cat was really thrown amongst the pigeons. Bengaluru equalised through Miku. Miku said to Corominas, ‘whatever you can do, I can do better’. And on the 61st minute, Miku created the 3rd Bengaluru goal out of the void of space. Yes, the goal was good enough for that comparison. He beat two people, dribbled into the box, and dinked it over Kattimani. Just to point out here, Kattimani wasn’t at fault. Goa did manage to win this game that they made pointlessly hard for themselves. I wonder if Lobera even warned them at half time of the dangers of complacency. If he did, they were all sharing on Kattimani’s stuff because no one listened, except for Corominas.

Coro was on a mission you see. He was the yang to Kattimani’s ying. They were having a competition. Corominas decided that he will carry this team and finished his hat trick. It was a good goal again. He broke the offside trap, dodged Johnson, rounded keeper, and scored almost casually.

It was almost as if Goa needed Bengaluru goals to wake them up because this goal came very close to Bengaluru’s equalised. On the evidence of this game, I can see that Goa will definitely make the semis. Even Roca is right in saying that Goa should win this title, even though he was playing mind games. If Goa hadn’t given up that lead, I would’ve called them to win this league. As it is, I think they’ll come close. If they fix their problems, they’ll win it but Kattimani has to go.

Fun fact: Ferran Corominas is now the leading goal scorer (4) of the league and has taken 7 shots with all of them on target. Wanna bet against him winning the Golden Boot?