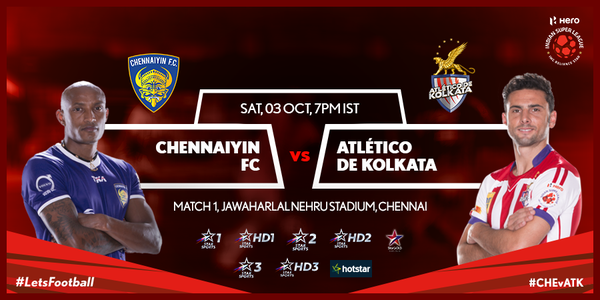 Ok, let’s get the immaterial out of the way – the opening ceremony. Utter waste of time except the fact that it allowed us to see how much bigger the Indian Super League 2015 season is than the 2014 season. The opening ceremony was essentially the who’s who of the Indian celebrity circuit. This is all I’m willing to say of an event that I believe doesn’t deserve to turn into a tradition. But us commentators don’t matter because sponsors have to get their few minutes of fame.

As for the game, there isn’t much backstory involved. Materazzi’s selection didn’t inspire me before the match much. The reason was that he chose Fikru and Jeje as his strike force. They were just too defensive.

I liked Atletico De Kolkata’s formation much more. Displaying an embarrassment of attacking riches, Habas the Henchman had Baljit Sahni, Iain Hume, and Helder Postiga in his line-up together. My early prediction was a win for ATK with CFC biting the dust, despite what the Star Sports experts said.

The Game Kicks Off With an Indian Twist The first chance fell to Jeje who had a free header from an Elano corner but he skewed it wide.

The corner, itself, was won by Elano’s dribbling skills. After that we had a reminder that the game was being played in India – a three legged dog decided to take a stroll on the Chennaiyin FC pitch.

What an embarrassment that was. Harmanjot Khabra received an unfair yellow card when the ball hit his arm.

He was obliviously jumping in the wall trying to block a freekick. Who won that freekick? Why, the pesky Hume of course.

Chennaiyin FC’s main weapon was, don’t be surprised, Elano. Elano looked incredibly sharp, fresh, and fit. He popped up all over the place to receive and release the ball in the likeliest of situations. It was obvious that Materazzi had given Elano a complete free role with no defensive responsibilities.

It was also clear that Atletico De Kolkata was struggling to keep a tab on Elano. Essentially, when a player floats like Elano was doing, the manager of the opposition needs to assign someone to manmark him because zonal systems don’t work in such situations.

Atletico De Kolkata Take the Lead Through a Double Agent The first goal came in the 13th minute on the back of Edel’s howler. It was a simple enough floated freekick from ATK’s right side.

The ball should have been caught easily by Edel but he ran into his own player Mailson, fell on his bum, and dropped the ball right into the path of Helder Postiga.

He won’t get an easier goal than that all through the current season. Chennaiyin FC 0 – 1 Atletico De Kolkata

That was an appalling start for Edel who, if you remember, used to play for Atletico De Kolkata last year. Controversy theorists, would you please stand up and be counted with your creativity. Jokes apart though, that was a poor first goal of ISL2.

Fikru Can’t Score But He Does Contribute Nonetheless After that Fikru showed exactly why I don’t rate him much. He had an open shot created by Elano but he fluffed his lines and dragged his shot wide because he wanted to bang it in as opposed to placing it in. Fikru repeated the anti-skill a little while later in the 22nd minute. Granted, he was facing two defenders but he could’ve at least got a shot off.

Chennaiyin FC came back into the game on the stroke of the 31st minute. Chennaiyin FC were constantly winning freekicks for Elano to exploit, as is their way.

This one paid off. Elano dropped a wonderful ball over the head of Atletico’s left back with Fikru ghosting in behind him. The header was won by Fikru but deflected by the keeper. The ball bobbled to Jeje Lalpekhlua who made no mistakes. Chennaiyin FC 1 – 1 Atletico De Kolkata

In the 29th minute, Baljit Sahni received his customary yellow card by going too strong against an opponent. He could’ve never won that ball but he decided to jump against the wall. Sahni has a tendency to draw yellow cards left, right, and centre so it’s no surprise that he got one in his very first game. During the half time, Marco Materazzi decided to bring on Bernard Mendy for Mailson. I can only assume that it was because of some form of injury. That was a forced substation, not a tactical one, although it could’ve been because Mendy does offer some attacking potential.

For a good 7 to 8 minutes nothing much happened in the game.

Maybe all the players were still having their tea! There were a couple beautiful moves between 52nd and 54th minutes led by Javier Lara Grande.

One was a nice give and go combined with beautiful step overs while the other was a gorgeous reverse pass. If Lara keeps that up, he could really make the Indian Super League 2015 entertaining.

In the 60th minute, Lara came to the fore again with a wonderful freekick. I am going to declare that this man will be very good this season. His freekick was left footed and came from the right side. It clipped the post with the keeper beaten.

John Stiven Mendoza Valencia came on in the 63rd minute. I was waiting for him to be thrown on. In fact, according to me, the game and Chennaiyin FC’s play specifically was screaming out for someone with the skills of Mendoza.

I liked how Chennaiyin FC were pressing the ball. It was calculated and careful, but still effective. They were pressing while simultaneously covering the possible passing lanes but it didn’t make a difference in the overall scheme of things. Helder Postiga made his second appearance in the game by stealing a headed back pass by Mendy.

The pass was short, Postiga stole in, took the ball wide, and finished low through the keeper’s legs. Two silly goals from Chennaiyin FC and score was Chennaiyin FC 1 – 2 Atletico De Kolkata.

In the process of swivelling and scoring, Postiga seemed to have injured himself.

Injuries caused by swivel type shots can be problematic. Postiga seemed to have been grabbing his hamstring.

This could be a long layoff for him which would create considerable problems for Atletico De Kolkata in the next few matches. Postiga was taken off for Valmiro Lopes Rocha (Valdo).

Valdo Puts The Game Beyond Reach Valdo would put the match beyond Chennaiyin FC in the 76th minute with a header. A sumptuous cross came in from the left after a lovely bit of skill from Hume. The cross was met by Valdo on the stretch over the defender. He put the ball into the far corner to take the game beyond Chennaiyin FC. Remember, Valdo is a product of Real Madrid’s youth academy. Chennaiyin FC 1 – 3 Atletico De Kolkata.

Atletico De Kolkata received a penalty in the 78th minute because of Mendy’s deliberate handball in the box. Lara took the penalty and put the ball hard to Edel’s lower right, but the keeper made amends for his earlier mistake by saving it. The resulting corner didn’t amount to much.

Chennaiyin pushed on trying to claw their way back. Mendoza shot from the left to the lower right only for the keeper to save it. Materazzi, after that little bit, went all out by introducing Balwant Singh for, here’s a mouthful, Lalhmangaihsanga Ralte (Sena Ralte). This was followed by an ATK substitution where Sushil Kumar Singh came on for Baljit Sahni.

Referee Gets His 30 Seconds Of Fame

In the 88th minute, the referee went mad and gave a silly handball in favour of Chennaiyin FC. The ball didn’t even hit the defender, Arnab Mondal’s, hand. The referee needs to take a dip in his western commode if his judgement is going to be this flawed. The resulting penalty was converted well by Elano. Chennaiyin FC 2 – 3 Atletico De Kolkata.

That goal gave Chennaiyin FC an impetus because they really gave it their all in the last couple of minutes and the stoppage time.

Habas the Henchman is an experienced manager. He is so experienced that he has coached international games. Materazzi, on the other hand, is a great former player who is only into his second season. And, you know what, it showed.

Materazzi chose to respect his opponents too much. For some reason, he went with the diamond formation with Elano at the head of the midfield. Elano will never defend. In his bid to really utilise Elano, Materazzi forgot about controlling the midfield. He essentially had a midfield of three players. There was a serious lack of balance in Chennaiyin FC’s team sheet. I think the team would’ve been better served with a five man midfield as opposed to a three man midfield.

On top of this, Materazzi all but gifted the wings to his opponents by not picking wingers in his own team. In fact, I think all three goals came because of the wings being empty. The first was a freekick on the wing which may not have occurred if there was a winger in addition to a wingback. The second was a back pass which may not have been needed if there was someone on the wings to receive it. The third goal was a direct cross from the wings.

Not only did I like Atletico De Kolkata in this game but I like what I see in general. I think ATK will continue to dominate the league. For Chennaiyin FC, my projection is that their Indian Super League 2015 season won’t be as good as their 2014 season was. Of course, a lot can change in the future but I don’t see many changes occurring with Chennaiyin FC.