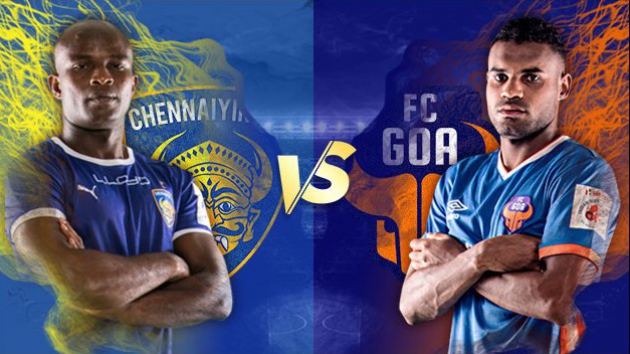 This was a game billed to be one of the best of the season simply because it was between the last year’s finalists. Moreover, the game was expected to be good because both Chennaiyin FC and FC Goa have been sucking lately. It’s not just basic sucking but instead heavy duty sucking. Before the game began, between the two teams there was only one point. That means that they had played two games each and Chennaiyin FC had one point while FC Goa had none.

The game was a tame affair that was managed handsomely well by Chennaiyin FC. Chennaiyin FC took the lead early in the first half and then doubled their lead mid-way through the half. As well as Chennaiyin FC played, FC Goa was also toothless and impotent.

The surprise in team news came from Chennaiyin FC who made no less than five different changes in this game. Most of the changes made by Marco Materazzi were aimed at fixing his team’s suffering defence. He replaced the last game’s goalkeeper Duwayne Kerr with the Indian Karanjit Singh and then topped that by bringing in Eli Sabia and Jerry Lalrinzuala for Bernard Mendy and Nallappan Mohanraj respectively.

The Chennaiyin FC midfield was also shuffled around as MacPherlin Dudu Omagbemi was replaced by Manuele Blasi and Jeje Lalpekhlua was switched out for the incoming Davide Succi. That’s a massive number of changes for a football, regardless of whether you consider Real Madrid or Chennaiyin FC. I felt those changes would have a major say in the game, whether on the positive side or negative side.

FC Goa, in contrast to the reigning champions, made only two changes. They brought in Sahil Tavora and Reinaldo Da Cruz Oliveira for Richarlyson Felisbino and Mandar Rao Dessai, respectively. The key for FC Goa, as is obvious, is to keep Laxmikanth Kattimani or Lucio from making mistakes. Both have contributed to their team’s defeats in the past.

The first half of the game began with a penalty claim for FC Goa. The penalty claim came when a Gaur player took a tumble in the Chennaiyin FC box on a fair tackle. However, there wasn’t enough contact and the penalty was rightly denied.

The initial period of the first half was full of turnovers from both teams. It was almost as if both teams were on a date with each other and didn’t know what to say on account of being only 16-year old. No, I haven’t faced such a situation. In case you’re interested, my problem has always been talking too much when faced with nervousness.

Chennaiyin FC showed more creativity and looked the more likely to score. This is why it wasn’t a surprise when they did with a sweet, sweet shot from Hans Mulder. He took on a short but smart pass outside the FC Goa box and struck an orgasmic shot straight into the far corner. It wasn’t a powerful shot. It wasn’t a wallop. Instead, it was almost a caress of a shot. Chennaiyin FC 1 – 0 FC Goa

Chennaiyin FC Pile On the Misery Conceding the opening goal almost took the stuffing out of FC Goa and their game became as limp as a…erm… 16-year-old watching an old Bollywood film from the 1970s with his parents.

The worst bit was just when they tried to show some confidence and determination, an old, sad, and dull Bollywood song showed up to really knock them off their feet. You see, Chennaiyin FC doubled their lead with what was an incredibly fortuitous goal from Mehrajuddin Wadoo.

For the rest of the first half, FC Goa tried to halve the deficit half-heartedly. They needed more passion, verve, and drive to do so but there was none to be found. The second half didn’t start well for FC Goa as they had to replace Lucio with Felisbino. The removal of Lucio meant that Balmuchu was moved into defence while Felisbino slotted into the Gaur midfield.

With respect to the gameplay, Chennaiyin FC managed the entire second half very well. They not only kept FC Goa at an arm’s length throughout the second half (there was no real chance for the Gaurs) but also countered at just the right moment. Even though Chennaiyin FC didn’t score the third goal, they looked the more likely of the two teams to score.

Chennaiyin FC’s cause was helped by Zico’s decision to not bring Romeo Fernandes on up until the 76th minute. It made no sense whatsoever to keep their most offensively proficient player on the bench so long, especially since FC Goa needed to score. In a nutshell, there’s no doubt about the fact that FC Goa deserved to lose.