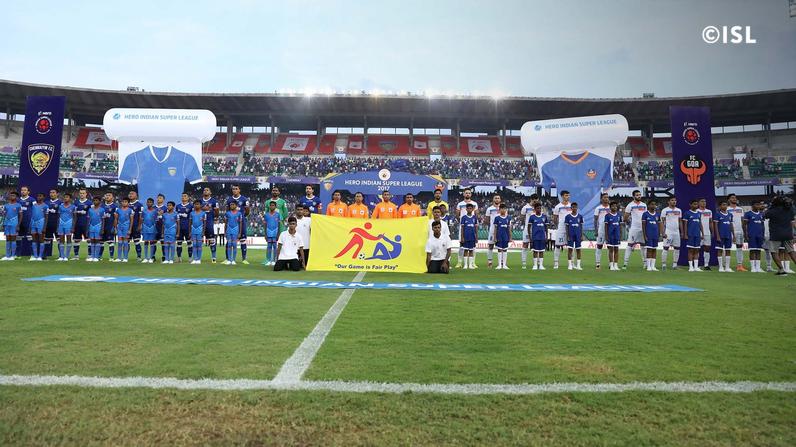 Someone Give Me What Kattimani Smoked At Half Time!

So, Goa beat Chennai yesterday… barely. Thanks to their goalkeeper, Chennaiyin got a very good sniff of a point in that game. I have a feeling they played so well because Laxmikant Kattimani offered them a whiff of whatever it was that he was smoking at halftime. Heck, I want me some of that shit too. After all, it must’ve come from Goa.

The scoreline, as you most probably already know was 3-2 in favour of the visitors. It was 3-0 for Goa at halftime before Kattimani decided to go AWOL in the head. At the very least, we got our first five goals of the Indian Super League, yeah? The first three of these five were excellent too. I’m sorry Super Machans but you’re in for a very long season if your coach is going to start every game with such tactics. I was properly flummoxed by John Gregory’s chosen formation, personnel, and tactics in this game. Why the heck do coaches shoot themselves in the foot so often? Chennaiyin started with tactics that were inherently contrary. Let’s break it down, shall we?

I think the problem Gregory faced was that of the number of foreigners allowed in the team. He absolutely wanted three foreigners in his defence (Calderon, Alves, and Sereno) which showed his defensive mentality. The logic here is that foreign players are slightly better than Indians so you put them where you feel the need for most quality. Because Gregory put 3 of his 5 in defence, you see what he prioritised.

On top of this, he decided to use the other two in midfield (Augusto and Mihelic). The entire thing backfired royally stunk up his face. His “foreign” defence failed to do what they were there for and he had to backtrack very quickly. The proof of this is that he withdrew Calderon later and put on Gregory Nelson. He should’ve started Nelson and the way he changed the game when he came on is enough proof for me.

Because Gregory put all his eggs in the defensive basket, he was left with Jeje leading the front line with support from Bodo, Mihelic, and Jerry. In that foursome, two are nearly underage with Bodo (18) and Jerry (19) and one was impotent (Mihelic with 5% contribution for his team). Never gonna work…

Another element that Gregory got wrong was that he played with full width. His team kept going to the wings for their out ball because of the pace of Bodo and Jerry. Once these guys had the ball on the wing, they didn’t know what to do with. You don’t bloody cross the ball if you have Jeje in the middle. What’s the point?

I wouldn’t have played either Calderon or Mihelic. I would’ve rather had Gregory Nelson and Jude Nworuh start for me. What a waste. This game surprised me. Goa played possession football but it wasn’t your Barcelona style of possession football. It wasn’t tiki-taka. It was much better than that and I loved it. Goa passed the ball with verve and style but they didn’t pass for the sake of passing.

They formed triangles in which they passed the ball 3-4 times before quickly coming up with a through ball for one of their runners. All their goals were built like this and it was amazing to watch. They played passion football but they were direct about it.

It was unbelievable how comfortable Goa players were on the ball. They were comfortable even when they were facing their own goal, in their own box while being troubled by two opposition players for every one of them. Their composure and calm was insane. They must all be Buddhists or Sergio Lobera must’ve really run some passing drills during their training sessions.

Goa also surprised me because they didn’t do high press a la tiki-taka. They were smart enough to not do it. In my preview, I assumed it was a foregone conclusion that they would attempt high press especially since Kerala Blasters had tried it. It never occurred to me that they would choose to intercept instead. Wonderful coaching from Lobera. I am a Goa Lovera now.

The only sad bit is that they decided to press the big red button that says “DON’T PRESS even if you have FIRE ANTS in your pants”! Kattimani must be a softy in his heart. He must be a softy with the 21-Love ice-cream flavour in it. I swear he felt sorry for Chennaiyin so decided to give them two Christmas presents early.

Dang it! I wanna hang out with this dude. He’ll probably give me the best seat to a real-life rendition of “Dude, where’s my car” where he’ll be saying both sides of the dialogue. He’s the equivalent of the two dudes from the movie! The first Goa goal was a thing of beauty and Ferran Corominas and Brandon Fernandes showed just how much the Goa team has practiced on passing (if defensive cool wasn’t enough of a proof for you). Their understanding was nearly empathic and very much emphatic (see what I did there?). After a quick Ping-Pong game at high speed, Coro ended up with the ball and slotted it away (with some help from a minor deflection).

The second goal was also built well even though there was an element of luck in it. Corominas was set free on the inside-right channel. His shot was parried by Karanjit Singh only for the ball to fall to Mandar Rao Desai. Mandar beautifully dribbled past two lunging tackles and shot only for Karanjit to parry again. This time the ball fell to Manuel Lanzarote. His finish was gorgeous and very much deliberate. Without controlling the ball i.e. first-time shot, he flicked the ball high over the keeper and two defenders. The ball clipped the bar before nestling in the bosom of the net.

The third goal was simpler than the first two. Lanzarote was the outlet on the inside-right channel. He controlled the ball dribbled it a bit and then laid it to the onrushing Mandar. Even though Karanjit got a glove on the shot, it still went in.

Three wonderful goals that were also advertisements for Goa’s (Lobera’s) style of football. We have a very impressed blogger folks. If Goa goals were beauties, Chennaiyin’s goals were howlers. One after another, Kattimani decided to just invite the Super Machans back into the game.

I know what you’re thinking…. You probably think I’m super hard on Kattimani and I admit that I am but what can I do. When I see such howlers in professional football, I feel like ladling my own brain out of my skull with a very blunt spoon. Such howlers are unforgivable. They’re a travesty. They’re abominations. They should be castigated so much that they feel like castration.

As an aside: I feel for you Kattimani. I so don’t want to be in your shoes right now. But, you’re lucky that you get to play football professionally. Why don’t you make the most of it and bloody well concentrate on the pitch?

Like I said, the Chennaiyin goals shouldn’t have existed. They were uncalled for and pointless. But, they did make the game more interesting. They also made Chennaiyin more confident. They gave them a reason to huff and puff.

I wasn’t that impressed with Chennaiyin’s game even in the second half. Their first goal came from a very tame and nothing of a free kick that should’ve trickled into Kattimani’s hands. Instead, he spilt the ball into the net like he was a prisoner in an American prison with nouveau sexual orientation. Piss poor.

The second goal was even worse. A nothing ball was lobbed into the Goa box. Jeje was going for it with a defender on his shoulder like Betaal from Vikram and Betal. Kattimani decided that he wanted to be Betaal too, so punched into Jeje’s chest restlessly. Penalty! Augusto converted as expected and that was it. Since Kattimani decided to play for Goa again, there weren’t any more goals and Goa won 3-2.

I will end this post how I began it:

What the heck was Kattimani smoking at halftime and can I get some of that shit too?