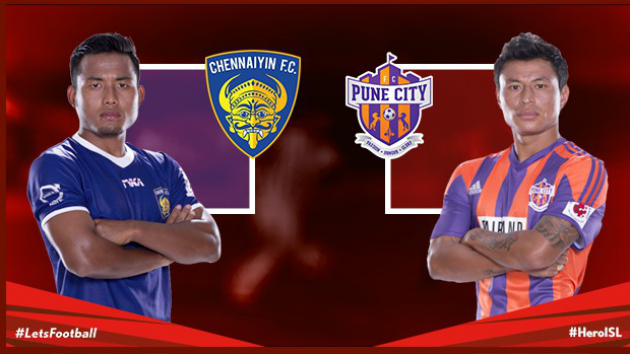 Well, well, well… what a result yesterday! By beating two of the semi-finalists of the last season, didn’t Northeast United announce themselves into the 2015 season? Could the results against Chennaiyin FC and Atletico Kolkata show that their team is finally clicking? Could they go on a fantasy run? We’ll know later of course because today is about Chennaiyin FC and FC Pune City.

FC Pune City, the away team today, is doing fairly well in the Indian Super League 2015 season especially if you compare it to their last year’s performance. Chennaiyin FC, the home team, of course, is not having a swell time in the 2015 ISL season.

Will the fact that Chennaiyin FC is playing at home after four games lead to a win for them or will Jackichand Singh continue showcasing his skills and tormenting defenders? This one will be an interesting battle. Both teams have a lot to play for. A win for FC Pune City will put them on top of the table. In fact, even a draw will propel them above FC Goa on the table. For Chennaiyin FC, this game is important because a win in it will bring them back into contention amongst the big guns.

Chennaiyin FC have been having a stop start season and are finding it tough to capture any kind of consistency. Chennaiyin lost their last game against the Highlanders and Marco Materazzi reacted to that dismal performance by ringing in the changes.

He fixed his error from last team selection by bringing back Elano Blumer and Stiven Mendoza into the starting line-up at the cost of Fikru and Jeje Lalpekhlua. He also chose to rest Alessandro Potenza which I feel might be a huge mistake. Bruno Pelissari and Harmanjot Khabra were also given the hook for Thoi Singh and Raphael Augusto. Possibly, the most interesting change was the removal of Apoula Edel for Karanjit Singh.

FC Pune City’s team remains almost unchanged with the exception of the injured Lenny Rodriguez who would sit this one out for Manish Maithani. Jackichand Singh, Tuncay Sanli, Eugeneson Lyngdoh, Didier Zokora, and Nicky Shorey getting a chance to continue their good form.

I have to say I have enjoyed how FC Pune City have been playing. They, I feel, have had a lot of variation in their attack and none of their strategies have been negative at all. They attack and they defend with class which is something that I’ve come to appreciate.

Chennaiyin FC, on the other hand, are an enigma. I think they’re an enigma to themselves as well to a point where they seem confused at times on the pitch. So, my prediction for this game is for FC Pune City to win by two goals to the 1 of Chennaiyin FC. The home team started the game on the front foot with Elano and Mendoza showing their almost telepathic understanding. Their interchange allowed Mendoza to get a shot off from outside the box. It wasn’t a bad effort but Steve Simonsen was more than a match for it. He not only saved it but held it too.

This action was followed by a bad decision from Manuele Blasi who came in late on Zokora and received a yellow card. My instant reaction was that that yellow card may cause Chennaiyin FC problems later.

In the sixth minute Simonsen saved his team when a short back pass from Gouramangi Singh was chased down by Elano. Fortunately, before the Brazilian could pull the trigger, Simonsen dived in and got the ball with his knee. It looked as if Chennaiyin FC wanted it more.

Chennaiyin FC Get a Great Chance The 19th minute brought the most existing goal mouth action of the game. The cross came in from Chennaiyin FC’s left flank. It was plucked out of thin air by Elano who tried to poke it past Simonsen. However, the keeper was up to the task and parried the shot. The ball then fell to another Chennaiyin player who could only poke it wide of the post under pressure from the Pune defence.

The game, I felt, was being affected by a poor pitch. While the commentators were claiming that the pitch was watered, it didn’t look like it. There was something wrong with it because the ball was holding up on it. The passes were running short, the ball was wobbling while rolling, and the pitch was essentially looking woeful and very thick. The 28th minute saw another save from Simonsen. It was innocuous ball from Chennaiyin FC’s Mailson Alves from deep in his half. In fact, it was a clearance from the defender. The ball ended up dropping for Mendoza and freed him from the clutches of Pune defenders. He ran at the keeper but Simonsen again saved the shot.

Chennaiyin FC’s domination, however, bore fruit in the 34th minute. The goal was scored by Bernard Mendy from a long throw in. The ball dropped into the middle of the penalty box, Mendy ghosted in front of his marker and nodded the ball into the net. Despite the form of Simonsen, the English keeper couldn’t have done anything there. Chennaiyin FC 1 – 0 FC Pune City

Near the end of the half, Ravanan struck the ball goal wards when the ball fell for him from a Jackichand blocked shot. However, Singh stretched out a big hand and used his strong wrists to deflect the ball off the target. It was a brilliant save which kept Chennaiyin FC in the lead.

Chennaiyin FC Double the Lead in Second Half In the second half, Mendoza doubled Chennaiyin FC’s lead on the back of poor play from FC Pune City. Pune lost the ball deep in their half to Elano who produced a wonderful slide rule pass for Mendoza behind the defence. Mendoza got free, rounded the keeper, and passed the ball into the net. Chennaiyin FC 2 – 0 FC Pune City

My prediction be damned. This match looked like it could turn into a rout for Chennaiyin FC.

After that goal Chennaiyin FC settled deep into their half. They were pressing and pushing FC Pune City well and every time they would get the ball they would try to launch a counterattack with pace and pinpoint passing.

FC Pune City Pull One Back The next notable moment in the game was the entry of Fikru and the exit of Mendoza.

However, that moment was nothing compared to FC Pune pulling one goal back. FC Pune City won a freekick on the right flank.

The freekick was taken by Dharmaraj Ravanan. The cross dropped on the head of Kalu Uche, who had earlier come on for Yendrick Ruiz earlier.

Uche’s header was saved by Singh but it dropped to Lyngdoh who made a hash of his swivel shot. Still, he knocked the ball to Uche again who made no mistake and slotted it in. Chennaiyin FC 2 – 1 FC Pune City Chennaiyin FC could’ve restored their two goal lead when Fikru got free behind the defence. He ran, received a lofted ball, and tried to slide it under the keeper but Simonsen again showed his class and stopped it.

FC Pune City could’ve gone level too when Jackichand Singh crossed the ball from their left flank. The cross was excellent and dropped onto the head of Adrian Mutu. Mutu’s header just missed the goal through deflection with the keeper floundering. Mutu got a header off from the resulting corner but again put the ball wide.

That would be the last significant chance for FC Pune City. Try as they might, they would not breakthrough or get another chance to do so.

There wasn’t anything wrong with how the two managers setup tactically – even in the case of FC Pune City. The game was lost on the pitch simply because certain players played better than other players.

When FC Pune went behind first, they were still in the game but they didn’t play like that. For some reason, the first goal rattled FC Pune City enough to start giving the ball away at the drop of a hat. Still, they could’ve still turned it around if they had applied themselves.

The game was lost, however, when FC Pune City went down by two goals early in the second half. After that, they had to really push for their goals. More importantly, Chennaiyin FC were astute enough to know that they can sit back and use their pace to counter.

I think the pitch also affected FC Pune City’s game because their game depends on either quick passing or close control dribbling skills. A pitch where the ball holds up or wobbles isn’t ideal for FC Pune City. At the same time, it can be said that FC Pune City should know how to play in all conditions.