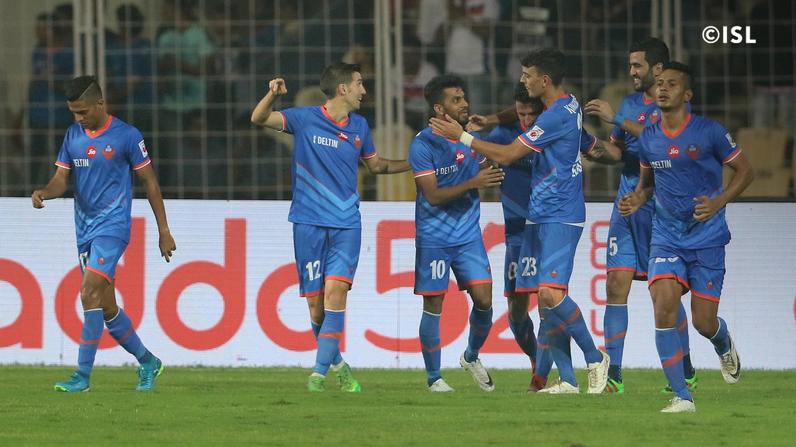 This game was billed as the ultimate attack vs. defence matchup. It was supposed to be a tight game. Goa must’ve lost their script. This was neither a “matchup” nor a “tight game”. It was a slaughter. It was an exhibition of excellent attacking football. It was Goa’s challenge to the rest of the league. Now, if they can only stop the Lobera – Kattimani Bromance.

Kattimani, oops Kerala Blasters, failed to stop the Goan juggernaut from notching up another flashy win. The home team ran out 5 – 2 winners in a match that was the perfect advertisement for the Indian Super League. And if there’s anything that we want it’s the growth and success of the ISL concept, right?

The Clash of Philosophies While scheduling to sit for this game yesterday morning, one thing stood out to me – the clash in the footballing philosophies of these two teams. Kerala Blasters play a defensive game despite their attacking riches while Goa play attacking football despite the sieve in their goal. It was almost like Barcelona were playing Juventus or even Brazil against Italy.

Kerala Blasters, no doubt, have put up some really effective defensive numbers in the ISL. This, they’ve managed by working together and defending as a team. Goa, on the other hand, are possibly the most attacking team in the league on the basis of their style of play and even goals. In fact, in most offensive metrics, Goa lead the league, which is saying something.

These two teams are ideal examples of why a team needs to attack. If you focus too much on defence, you can, at best, get a draw e.g. Kerala Blasters. However, if you attack well, you can get a win even if your last line of defence likes to smoke up and go to sleep in the middle of the game e.g. Goa.

If this wasn’t enough, Kerala were without Iain Hume. Further, Berbatov only played about five minutes and that too in the midfield. He started in midfield but had to go off due to injury. They still had Mark Sifneos, a man who looks like an Australian, has a Greek name but is actually Dutch. He does score though so maybe Hume and Berbatov being unavailable is a good thing for Kerala from now on.

Incidentally, Berbatov’s injury is bittersweet for me. You see, in my armchair scouting of Berbatov I said:

“All this hinges on Berbatov maintaining basic fitness levels, though. My understanding is that Berbatov is quite fit for his age.”

While I worried about his stamina even before a ball was kicked in the training ground, I still thought he’s quite fit. So, right and wrong both. His performances (no goals, no assists, and I don’t even think he has played like a marquee player), along with the new injury, show that he wasn’t fit after all. I’m going to write a few templates. They will all revolve around Laxmikant Kattimani and his unforced errors. I’m going to sit through one of these nights and come up with all the various ways that a keeper can fuck up. I’m going to write one or two paragraphs for each of those types of mistakes and when it comes to mentioning the keeper I will say Kattimani each and every frikkin’ time. I’m going to title this series as the LAXMIKANT “THE SIEVE” KATTIMANI series.

The guy is unbelievable. He defies everything that is good and holy in the world. He’s the antithesis of skill. I have an old school friend who I call The Klutz. He drops everything you hand to him, he stumbles over invisible things in the air and the floor, and he laughs when shit goes down. I think I’m gonna start calling him The Kattimani from now on. It is far more appropriate.

In this game, Kattimani made his customary error. It happened when Sifneos received a ball from deep right flank. It was a cross-field ball that floated over the defender onto the feet of Sifneos. It was a Hollywood pass and Jackichand Singh should save the clip as a part of his portfolio. Maybe his agent should save it. So Sifneos receives it and hits a shot. It’s a tame shot. It’s the kind of shot that you hit towards your kid.

It was similar to how my grandmother would play football but Kattimani’s reflexes were akin to my great grandmother who is probably turning over in her grave at the travesty of Kattimani calling himself a footballer. I swear if prisoners received the soap like that in jail, they would be ecstatic because their asses would be safe. Said prisoners may even exchange an arm and a leg for such a throw. Even that wouldn’t stop them from catching the damn ball or, err the soap.

Let me be plain. Kattimani spilt the ball in a way that it went into his net behind him. You know, this used to be funny once but it is now getting damn annoying. This guy keeps ruining a perfectly balanced match. Never mind how the game ends, he still ruins it for everyone involved. He needs to realise that he is destroying his career.

It’s come to a point that it might be good for him to be dropped. I, no longer care what he does to his team and teammates, I’m talking about his benefit. I don’t think he’ll regain his confidence if he continues to play. When you’re that deep into a sequence of keeping errors, it is better to step back and take a breath to recompose yourself. Lobera is only making the confidence issue worse for him by shoving him into the limelight again and again. Do you know what he did in this game? He made Kattimani the bloody captain of the side. WTF was he thinking?

These errors are rooted in loss of concentration. He has trouble concentrating on the pitch. He has it in him to be a good keeper. I know it. It’s evident by some of his plays. For example, in the second half he made a couple of good saves because Goa had enough of a lead and the pressure was off. This shows me that it is a pressure thing for Kattimani and nothing else. The first half was like a boxing match. Both teams got hits off. After going 0 – 1 down, Goa struck back at Kerala Blasters within 4 minutes through Manuel Lanzarote. Lanzarote placed the ball inside the near post on the volley from a cross from the left flank. The cross was made by Narayan Das and was very good. Even better than the cross was the ball that set Das free. Take a bow Edu Bedia, you’re a star.

Within another 10 minutes, Goa had the lead when Lanzarote scored a solo goal. This time it was the KBFC keeper. Paul Rachubka’s pass was intercepted by Ferran Corominas who poked the ball into Lanzarote. Lanzarote took it, ran at the entire KBFC defence comprising Lakic-Pesic and Sandesh Jhingon both, deposited two of them on their arses and finished with a placed shot again. Rachubka must’ve spoken to Kattimani before the game…

Lanzarote would’ve been the best player on the pitch in the whole game if it wasn’t for one of his teammates. He not only scored two goals but hit the crossbar later in the second half too. It was a unique shot too. When he hit that shot, I looked away because it was too high and wide but it curled and dipped. I had to see the replay to know that it hit the crossbar.

Goa’s Cockiness and the Showboating Goa, though, were cocky. They were arrogant to the point that it felt to me like they were showboating with their passes. They kept trying to overplay the ball in their own half trying to get KBFC players to run around. For most part, they succeeded. Once, they didn’t.

This was later in the first half when Jackichand Singh stole the ball and did a give-and-go with Milan Singh. The pass from Singh was beautiful and freed Jackichand for a one-on-one with Kattimani despite the entire Goa defence being available. Jackichand finished with a cool finish by slipping the ball under Kattimani’s onrushing body. Just to specify, Kattimani was NOT at fault here.

Goa lacked urgency too when it came to passing from the back. It was all a little too casual and a little too laid back. To be fair to them, they did win the game handsomely. In fact, within the first 10 minutes of the second half, Goa had won the game and were coasting. That’s a total of 55 minutes including the first half. After that period, it was all just a grand TP from Goa.

Corominas Steps Up To Be Counted

Why did Goa not have to play the final 35 minutes? It was because of what Corominas did. If Kattimani has some doors of perception type magical mushroom vindaloo at half time, Corominas must’ve had chewed on some lightning because he was electric. Within the first 10 minutes of the second half, Corominas had his second consecutive hat trick wrapped up. Now, he’s going to for a hat trick of hat tricks. I’ve never heard of the like.

His first goal was composure personified. He made a beautiful run in-between the two centre halves, which was beautifully met by an Ahmed Jahouh pass. Corominas took one touch, hit the ball into the net via the space between the keeper’s legs.

The second goal was similar to the first one in terms of the run and the ball but the finish was different. The ball was supplied by Brandon Fernandes and the finish was a dink over the keeper instead of a drilled shot between his legs.

Corominas completed his hat trick when Lanzarote ran free down the right side. Corominas was making a run to the far post and Lanzarote had enough time to pick out a pass. He waited, waited, lit up a smoke and then scratched his ass before putting in a cross which Corominas finished with a single touch.

The FC Goa freight train (not full of coal, full of diamonds this time) continues to roll over all comers. This was a performance that was a challenge. Is there anyone in ISL that can take up this dare of playing Goa?

Note: I wanted to show you statistically how good Goa is but this post is already as long as KBFC faces now. I’ll put the stats up as a Facebook post. Keep an eye out for those updates.