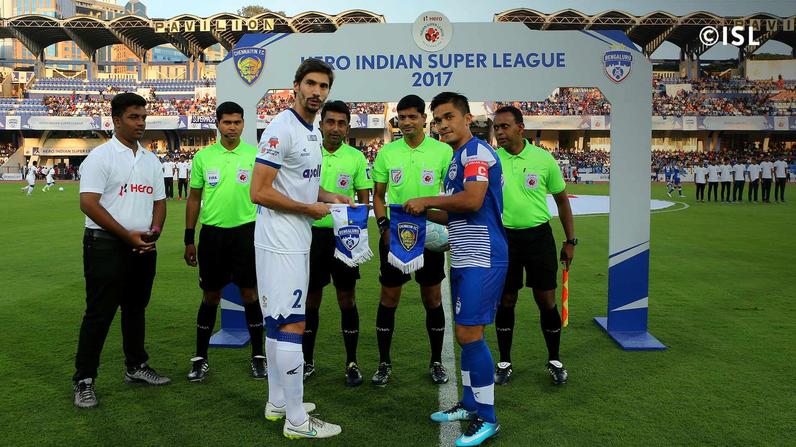 Roca must be kicking himself today. That was a game that they should’ve won. Chennaiyin FC are a great team but Bengaluru’s A-Team is more than capable of, at least, getting a draw with them. Unfortunately, it wasn’t the Bengaluru FC A-Team on the pitch yesterday. Roca’s team selection made it easier for Chennaiyin FC to win this game.

This was the Southern Derby. I get that there isn’t a lot of history between these two teams but that doesn’t mean there isn’t rivalry amongst the fans. This shouldn’t have been the game to rest players in. The win now brings parity to the points tally of Chennaiyin FC and Bengaluru F, with both of them on 12. More important than that, though, is the confidence this win will give to Chennaiyin FC. It must be sky-high now. Albert Roca’s team selection had a huge bearing on the result in this game. While his decisions seemed a little excessive and overcooked, it must be pointed out that he was forced into making them. You see, Bengaluru FC got three days to rest while their opponents had ten days’ worth. This meant that Roca had to bring in some fresh legs.

However, I think he went overboard with it. He made six changes to his starting line-up. Of these six changes, removing Udanta Singh, Erik Paartalu, and Juanan probably cost Bengaluru FC the most. In their place, Roca brought in Toni Dovale, Lenny Rodrigues, and John Johnson.

These three changes cost Bengaluru FC the most. Udanta Singh not being there meant lack of penetration from the southerners because his USP is to dribble and get behind the back line. He also brings pace to his team. Juanan’s absence meant less of an aerial presence which is how Chennaiyin FC scored their second goal. Finally, lack of Paartalu was equivalent to lack of physicality against the highly effective pairing of Bikramjit Singh and Dhanpal Ganesh.

Other changes he made were the inclusion of Gurpreet Singh, Nishu Singh, and Edu Garcia in place of Mawia Ralte, Subhasish Bose, and Braulio Nobrega. Gurpreet is a first teamer who was suspended but Bose and Nobrega both are squad players. All these changes made Bengaluru FC less cohesive and also took away their edge. The direct result of this was Chennaiyin FC starting better and dominating them in the first few minutes. While Roca made mistakes with his team selection, John Gregory got his astoundingly spot on. Gregory’s strategy was simple. He wanted to lock down the midfield so that Bengaluru couldn’t move forward. This strategy worked for Gregory because it nullified Miku and even Edu Garcia to some extent.

Gregory asked these two defence minded midfielders to shield his back four and prevent Bengaluru from breaching the Chennaiyin box. It is these two who ended up rendering Edu Garcia toothless.

On either side of these defensive midfielders, Gregory had Judge Nworuh and Francisco Fernandes to provide even more defensive stability. In fact, Gregory picked Nworuh over Gregory Nelson precisely for this reason. This nullified the threat of Toni Dovale.

Stopping the two attacking midfielders meant that Miku was starved for service. On top of this, Miku was also crowded in the forward position. Lack of service and this crowd forced Miku to come deep for the ball which nullified him further.

In fact, Chennaiyin FC were so good with their tactics that they kept Bengaluru FC from breaching their box too often. The few times that Bengaluru broke through the defensive vice, the Chennaiyin backline was more that capable of collecting or clearing the ball. Thus, Bengaluru FC had what I call sterile possession.

Picking a defensive midfield, however, had a price. This was the fact that Chennaiyin couldn’t retain possession. John Gregory picked defence and stability over possession based domination. Essentially, Gregory decided to be defensive and focus on counterattacking.

Chennaiyin FC Take the Lead; Put Bengaluru FC on the Back Foot Chennaiyin FC’s tactics worked so well because they took the lead so early on. Had they not taken the lead at 5 minutes, they wouldn’t have been able to sit back so deep with sole focus on defending. The lead had an element of luck in it too. A deflection played a key role in this goal.

The move began with Inigo Calderon making an inside overlapping run (can we call it underlap?) down the right wing. Calderon received and took the ball to the baseline before crossing. The cross was partially blocked. The following clearance, however, hit Chhetri and rebounded to Jeje near the penalty spot.

Jeje is deadly in these situations. He controlled the ball and lashed a powerful shot towards goal. It was hit from close range and Gurpreet singh got a hand on it but it still bounced under him and went into goal. You can maybe say that he should’ve done better with it but it was very vicious shot.

Going a goal down meant that Bengaluru had to attack more strongly and press higher. They had a good chance to equalise too when Edu Garcia hit the outside foot of the goal post. It was from a long shot that went across Karanjit Singh. That opportunity was a result of Bengaluru’s more intense high press.

As Chennaiyin tried to stop Bengaluru from playing, they committed loads of fouls and strong tackles to break up play. This made the game more physical, aggressive, and a little bad tempered.

Bengaluru FC Equalise Only to Lose the Game By the end of the first half, Bengaluru had drained their collective creative energies. They looked shorn of ideas on how to attack. This is why I think the team selection from Roca was flawed. The Bengaluru team was not creative enough. The second half started with Bengaluru toothless that is up until Roca brought on Udanta Singh.

Straight up, Udanta and Miku combined to create a golden opportunity for Chhetri. Chhetri’s shot from near the penalty spot was scuffed, a direct contrast to Jeje’s vicious shot of the first half.

As Bengaluru pushed more men forward, Chennaiyin looked counter. They got numerous chances to double the lead. In fact, as more time passed, Chennaiyin got more and more chances to counter. But, they failed to take advantage of them.

Bengaluru equalised finally with Chhetri who had been his team’s most creative and effective player throughout the game. He received the ball from Udanta (Roca, kindly take note), took a touch, and lashed a shot into the net. The shot was so strong that it went by Karanjit Singh before he could even steel himself for the new Star Wars movie.

This is where Bengaluru missed Paartalu and Juanan the most because Chennaiyin went back and retook their lead. Everyone knows Chennaiyin are good on set pieces. They’re like NorthEast United that way. Sadly, Bengaluru didn’t have their primary defender in Juanan and primary bouncer in Paartalu.

Chennaiyin took the game with a goal from Ganesh. Ganesh simply rose the highest and headed the ball in from a free kick by Rene Mihelic. With that goal, Ganesh impregnated himself and went from zero to nine months in the time he took to celebrate (hint: look at his celebration). Arnold Schwarzenegger would be proud of Ganesh today.