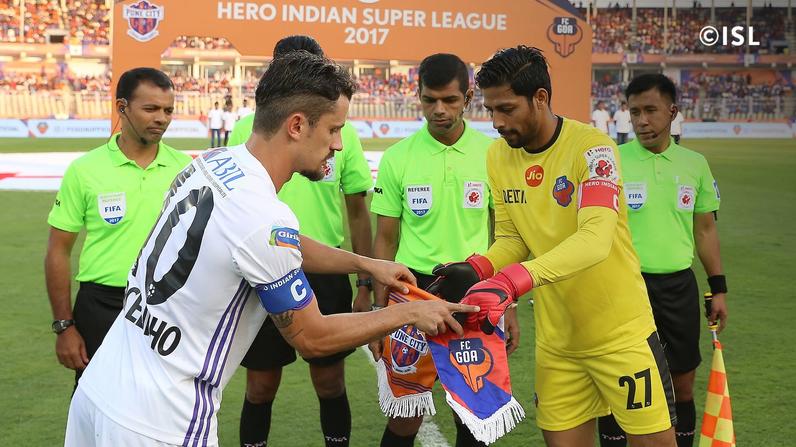 One-Trick Pony FC Goa Lose Because of No Plan B This game was about the sharpness of two swords in many ways. Goa and Pune were both passing and attacking teams that relied on their foreign pairings in their respective attacks. In the case of Goa it was the combination of Manuel Lanzarote and Ferran Corominas while FCPC relied on Marcelinho and Emiliano Alfaro. As it was, one pairing was found wanting and the other was efficient.

Goa started this game sharper of the two teams and being the home team, it is understandable. They looked very smart on the ball and had their passing game going quite well. In fact, FC Pune City looked in trouble as Goa unlocked their defence with ease. Because FCPC was on the defensive, they couldn’t attack at all. If you only watch the first 12 minutes or so of this game, you would not think that Goa lost.

Such was Goa’s dominance in the first 10 minutes that they had a shot caroming off the goal post. It was a lofted ball for Ferran Corominas who had made a run between the two FCPC centre halves. One of the centre halves won and foolishly headed the ball to this keeper.

The keeper could only palm the tough back header and Corominas pounced on the loose ball. Despite facing a very acute angle, Corominas got a shot off and even hit the outside of the goal post. Incidentally, that shot meant that Corominas doesn’t have the 100% accuracy record anymore. Shots that hit the frame of the goal are considered off target.

However, that was Goa’s best period of the game. They soon lost their way. They started misplacing their passes needlessly. When your game is passing and you’re misplacing your efforts, then you’re bound to give over your domination. That’s what happened to Goa.

Such was the sterility of Goa that Sergio Lobera tried to mix things up in the second half. He took off Ahmed Jahouh (partly because of his yellow) and Narayan das, to bring on Pronay Halder and Manuel Arana while pulling Mandar Rao Desai to the left back position.

The front four of Corominas, Lanzarote, Arana, and Brandon Fernandes is very potent but they’re all small players. They all play on the floor and through the middle but there were too many players to go through. This is why they were nullified.

Despite all this, Goa created a few chances. They even had a penalty appeal that was rejected. If they’d been more efficient would’ve got something from the game like FCPC showed them. FC Pune City’s game management was very impressive and showed some serious tactical drilling from Ranko Popovich. It wasn’t a smash and grab win from FCPC. It was well deserved because of the way they rendered the Goan attack impotent. Their management of the Goan attack is why they won this game.

In the first half, apart from the first 12 minutes or so, FC Pune City were in control of the game. In fact, they had the best chance of the first half when they countered another Goan sterile attack. On the counter, the odds were already in their favour with a 3 on 2 but they passed well and turned it into 3 on 0. At one point, FCPC had three players in the box with Goan defenders well behind them. They should’ve have taken a lead at that point but they fluffed their lines.

FCPC’s win was based on their management of Lanzarote and Corominas. Both players were marked very tightly. The defenders were so tight that they must have Lanzarote’s and Corominas’s colognes on their person today. I wonder if their wives are wondering whether they’ve turned gay or just liking the new fragrances.

Pune also gave the Goans free reign on the flanks but kept the middle tight knowing fully well that Goa don’t have the tools for a crossing game. The only way to counter such defence is accurate passing or lobbed balls to huge target men. Goa’s passing was far from accurate yesterday and they don’t have a huge target man in their squad anyway.

Moreover, once Pune had the lead, they became even more defensive and dropped deeper. Goa had to push on for the equaliser which left them open for the second goal.

FCPC Give Their Detractors the Finger Everyone who has called out FCPC was shown a gigantic middle finger by their players. I’ve been one of those detractors and I can tell you I felt that finger. My contention, though, is that I question FCPC’s long term strategy and not the quality of their players or coaches. Even I’m not foolish enough to say that Marcelinho, Alfaro and Marcos Tebar are not class, leave aside other good players in the FCPC squad.

FCPC were good in this game. They were good enough to have taken the lead before they scored when Marcelinho went down/dived in the box. Although there was contact, it was transitory. At the same time, any contact in the box means penalty so this one could’ve been given. By the way, I consider the denied Lanzarote penalty claim as a balance to this one.

As it is, Indian referees don’t have many supporters in football. These kinds of performances, though, ruin their reputation further. Such is the state of Indian referees that he wasn’t even taken seriously by the players. At one point, Marcelinho managed to move the free kick position forward only by repeating the question multiple times at the referee. How dense can you be if you’re browbeaten by players you’re supposed to control??

FCPC’s lead came through their attacking duet of Marcelinho and Alfaro. It was a simple goal that showed both their qualities. Marcelinho put in a through ball for Alfaro who was running between the defenders. Alfaro finished smoothly as he usually does in these situations.

When Goa pushed forward for the equaliser, FCPC countered and doubled the lead. It was kind of unlucky for Goa as a clearance got deflected onto the path of Jonatan Lucca. Lucca just had to tap it into an empty net and he did.

Incidentally, how good was Laxmikant Kattimani in this game? He didn’t make one mistake! Not a single one! He must be good enough to be an understudy to Peter Schmeichel now. Heck, he’ll supersede Buffon, if he keeps improving like this. Bah! Humbug!