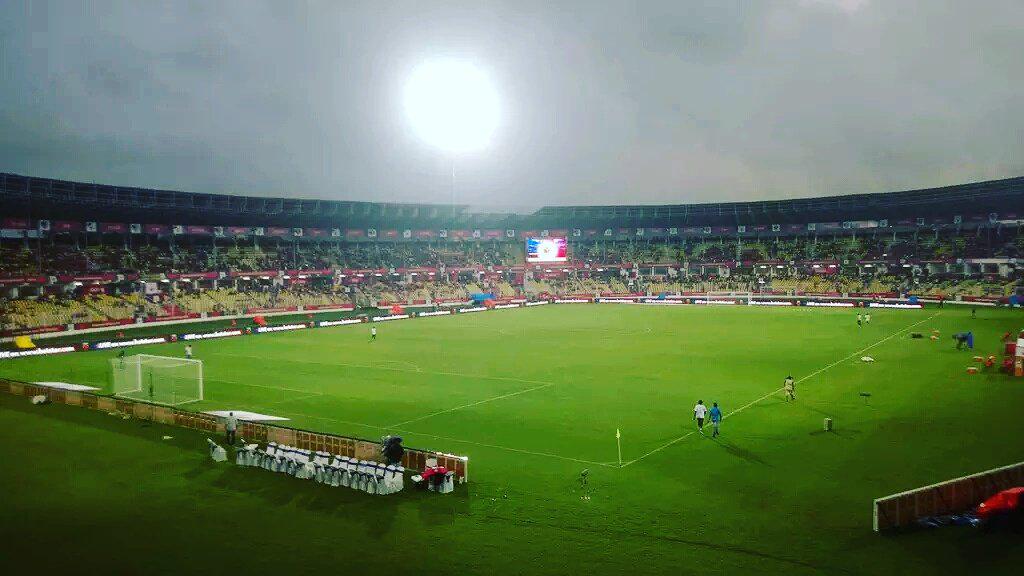 Yesterday’s match was epic in its unique way. It was a good kick-off for the Indian Super League 2015 season. Now, let’s hope that FC Goa turn on the magic unlike last year when they struggled early on in the league. Those of you who’ve followed this blog before would know that I have a soft spot for FC Goa.

Effectively, while my analysis of this match will be neutral as always, you will see little hints of where my heart lies. On the other hand, I am a Delhi lad so I don’t really know where my loyalties should lie. I think I’ll go with the team that plays good football, regardless of whether that team wins or not. I predict good football and a win for FC Goa. Team news surprised me a little but that’s probably because I don’t know all the players as well as I should. I expected Narayan Das in the starting line-up but Zico went with Keenan Almeida. I thought Zico would go for Daryl Duffy but he went for Reinaldo Da Cruz Oliveira.

Rest of the FC Goa starting line-up was as I thought it would be. There were surprises for me in Delhi Dynamos FC’s team too. First and foremost, I wanted to see Adil Nabi but Roberto Carlos went with Richard Gadze.

There wasn’t even Robin Singh in the starting line-up because of his international duties. Seeing Gadze being picked over Nabi and Singh, I immediately felt that it was a mistake from the Brazilian legend. I thought John Arne Riise would play in the central defensive position and I was right.

The First Half Kicks Off With FC Goa FC Goa started the game brightly keeping the ball well and showing good sharpness. Delhi Dynamos FC were pegged back and it took FC Goa only 3 minutes to break through their defence.

The man responsible for the damage was, don’t give you dare give me that astonished expression, Romeo. The ball came lofted down the right flank; Romeo took it on his chest with a brilliant first touch. His next touch saw him beat the last man.

He reached the touchline, faked a cross to see the defender pass him by, and picked out a wonderful cut back onto the penalty sport. Mandar Rao Desai was running in from the left flank. He got ahead of his marker and dinked the ball over the Delhi keeper, Sanjiban Ghosh. FC Goa 1 – 0 Delhi Dynamos FC.

My dear gentlemen, this was a breath-taking goal with brilliant play from the men in blue. Take a bow Romeo, there; be many Juliettes after that bit of skill.

Delhi Dynamos FC were looking very ragged. They were trying a counterattacking game but FC Goa were pressing very well. There were lots of long balls from Delhi but they would never get through Lucio and Gregory Arnolin with those kinds of balls. This was FC Goa of last season folks.

There was one thing though. Delhi Dynamos FC weren’t looking as woeful as their 2014 avatars.

In the 11th minute, Delhi Dynamos FC used their luck when a long shot came in from FC Goa’s midfield.

The Delhi keeper parried the ball straight to an unmarked Romeo who could only connect with air. The ball still bobbled to Lucas Moura who hit the ball hard first time.

Delhi Dynamos FC pegged FC Goa straight back with a counterattack. Hans Mulder reached the right flank by-line and managed to cross the ball in. The ball trickled across the FC Goa goalmouth. A minute later, Richard Gadze got free of the Goa defence and went up one on one with Elinton Sanchotene Andrade. He tried to dink the ball but the keeper stayed big to block it.

After the first 10 or so minutes were gone, Florent Malouda announced himself with a mazy dribble and a smart cutback. He would go on to show more skill from different places on the pitch but Delhi couldn’t convert the chances. Another Delhi player who started shining along with Malouda was Vinicius Ferreira de Souza. The man reminded me of how Romeo appeared out of nowhere last year. After the 20th minute, the game settled down a little with FC Goa sitting back to wait for a counterattack and Delhi Dynamos FC finding it difficult to go through their defence.

There was a lot of scrappiness as well. However, just before the half time whistle, Delhi Dynamos FC’s worst nightmares came alive like Goosebumps.

They gave away a silly foul on the edge of their box on the right flank to Joffre.

The resulting freekick was taken by Jofre low and hard and finished by Reinaldo with his knee. So, goals through open play and a freekick for FC Goa. FC Goa 2 – 0 Delhi Dynamos FC.

Players That Were Visible For Right and Wrong Reasons Both Malouda and Vinicius were wreaking havoc on FC Goa’s right flank where the new boy Almeida was deployed.

He looked quite overawed by the occasion. I still think Debabrata Roy would’ve done better on the right with Narayan Das coming into the left back position.

Almeida was looking all over the place, committing fouls, dropping balls while taking throw-ins.

Throughout the rest of the first half, Delhi huffed and puffed but they could neither get the right shot nor the right pass. Part of the reason was Denson Devadas who started sticking to Malouda like a leach in heat.

He did a brilliant job screening Malouda and the FC Goa back four. Another Goa player that stood out was Lucas Moura who showed some great vision along with passing and dribbling skills The second half began with Roberto Carlos and Gustavo Dos Santos coming into the fray for Mulder and Vinicius. Carlos took up the central midfield position from Mulder while Dos Santos took up his position on the wings. The change didn’t have much of an impact because Delhi Dynamos FC still looked toothless while FC Goa continued to create chances on the counter.

There was a goalmouth scramble preceded by a gorgeous Riise run and two post hits. Riise ran the ball forward and then struck a left footed curler onto the far post. The ball went to the far wing from where a cross came onto the head of Malouda. Malouda headed it onto the post as well.

A Battling Second Half with Some Chances The second half continued dully till the 70th minute after which it picked up in entertainment.

Around this time Delhi also gave us our first look at Adil Nabi. His first touch was skilful with a cool pass at the end of his skills.

On the other end, Sanijban Ghosh played out of his skin and smothered the ball at the feet of Desai when a goal should’ve been the most likely outcome. The rest of the second half played out the way the whole match went with Delhi trying to get behind Goa defence and Goa counterattacking. It rained before this match. The climate plays a crucial role in how a game plays out. Rains usually make the field quicker where the ball skids off the moisture on the grass. That wasn’t the case here because the ball was holding up instead. That only happens when the drainage system of the field isn’t up to the mark.

The point is that the ball was holding up on the pitch. Romeo used that very well in the first goal when he poked the ball beyond a diving Riise. While Romeo is a wonderful player, he isn’t so good as to adjust his game so quickly to the pitch. He could cope with the changed nature of the pitch because it was his home ground.

In terms of how the teams played, I think Delhi Dynamos FC played as individuals while FC Goa played as a well drilled team. There was more cohesion in how the Goans were playing while Delhi looked more cobbled together.

FC Goa’s strategy was simply to use the pace of their wingers against Delhi’s wingbacks. For me, Delhi Dynamos FC made the same mistake that Chennaiyin FC made yesterday. They didn’t have wingers because they chose to go with a five man defence. Atletico De Kolkata took advantage of that yesterday and FC Goa did the same today. The game was won in the midfield and specifically on the wings.

FC Goa took the lead in the 3rd minute. After that, they decided to sit back and counterattack by using the speed of their wingers. The whole game played out like this with FC Goa’s strategy paying dividends with their second goal.