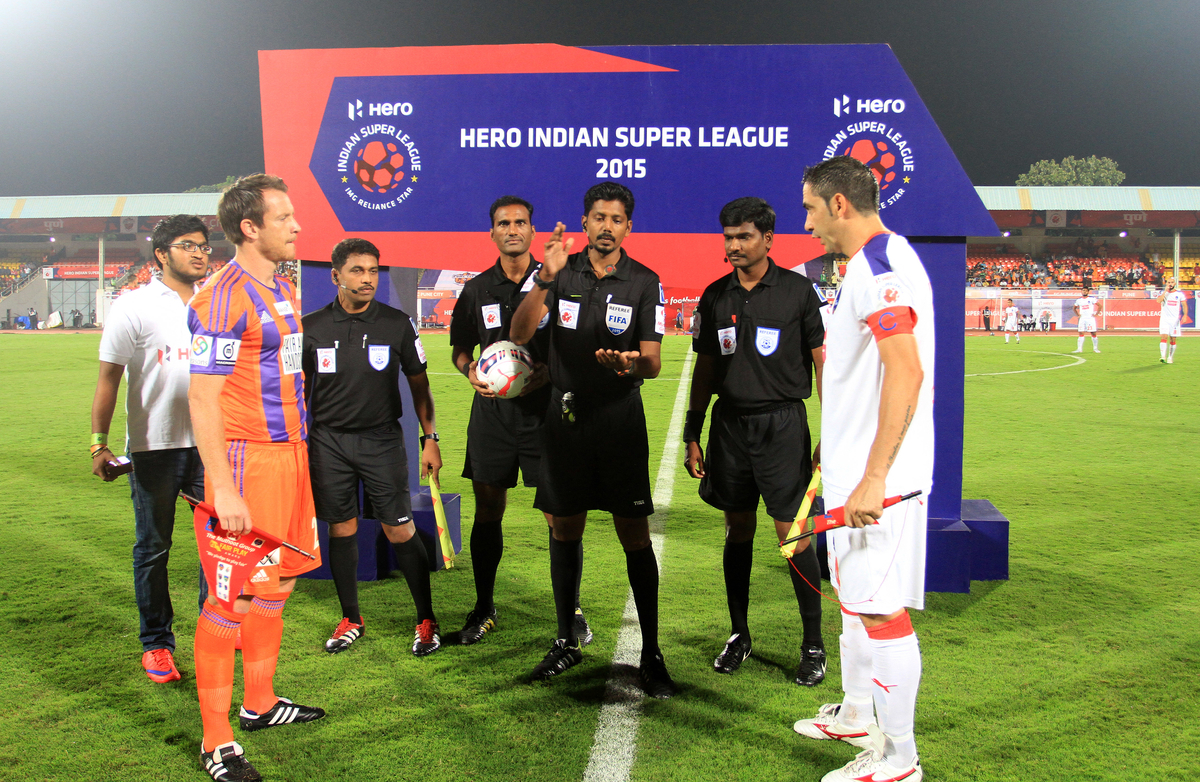 This is the game in which FC Pune City would throw down the gauntlet against all the other contenders (read: Atletico Kolkata, Chennaiyin FC, and FC Goa) for the top spot in the Indian Super League 2015 table.

For me, two games are not really good enough to judge where a team will end up on a table. Granted; we only have 14 games in an Indian Super League season but I still don’t think two games are enough.

The 3rd game, however, can reveal much. If a team is top of the table after 3 out of 14 games, then you know they have some substance. It’s more than 20% after all. So, this game, for me, would show how good each of these teams are. To be honest with you, I didn’t expect to see so many changes.

FC Pune City made some very critical changes in their team from the last game.

They took out Roger Johnson from the centre half position and brought in Diego Colotto and Gouramangi Singh with Dharmaraj Ravanan showing his versatility by playing in right back position. Maithani moved out from defence to midfield, a move that i wasn’t entirely sure of.

Zokora was rested for James Bailey. All three attackers were replaced by David Platt as well with the impressive Israil Gurung, the old Adrian Mutu, and the Costa Rican Yendrick Ruiz being replaced by Jackichand Singh (Yay!), Kalu Uche, and Wesley Verhoek. All the changes from FC Pune City were very daring. At the same time, it did make their bench very strong which boasted of Mutu, Zokora, and Tuncay Sanli!

Delhi Dynamos FC made huge changes as well with the highlight being the return of homeboy Robin Singh for the disappointing Richard Gadze. Apparently Robin Singh flew back straight from the international game so that he could feature in this game. I have to admit that from the first game I didn’t rate Gadze so much and wanted to see Robin Singh. They also replaced Sanjiban Ghosh with Antonio Doblas Santana.

A First Half Where Indians Glittered Along With the Marquee Stars Early in the first half, Robin Singh got a shot off from outside the box while Jackichand Singh showed his skills on the wing with a cross and a volley. I like the look of Jackichand Singh. I haven’t seen him before but he looks like a tricky customer.

More importantly, he looks like someone who thinks about the game and his opponent. I think Jackichand Singh is as good as Romeo or vice versa. While Rome is an instinctive dribbler, Jackichand Singh is a thinking winger. Both Jackichand and Romeo have pace to burn along with good dribbling skills and brilliant first touches.

The First Half Was Very Well Matched and Technical

It was interesting to note that Verhoek was playing in the central position as opposed to Uche. This was an interesting move from David Platt. I was curious to see how it would pan out.

Looking at Uche, he totally reminded me of the Premier League striker Obafemi Martins in his younger years. It’s not that surprising because both are Nigerian and have similar styles of football. Arsenal fans will, of course, remember that guy with some real venom. I won’t talk more of him; Martins not Uche. I’m also an Arsenal fan. As is often the case with highly technical games, the opening goal came from a set piece. This was good from Delhi Dynamos FC. They couldn’t penetrate with open play, so they went around the problem. They used a corner to score.

And, who was it who scored? Why, Robin Singh, of course. No, not the one-kneed-pull-at-Sharjah cricketer, but the one-knee-in-air-with-a-header into the goal. This is exactly what Robin Singh did. The corner was taken by Malouda. It was floated onto the back post. Robin Singh had peeled away from his marker which allowed him to nod the ball into the net. FC Pune City 0 – 1 Delhi Dynamos FC

In the last 7 minutes of the first half, FC Pune City came alive and really threatened to score the equaliser. There were a series of corners and a good two minute period in which Delhi Dynamos FC didn’t even come out of their box.

The best chance came in the 45th minute but Colotto showed why he is a defender and not a striker. A freekick came in and fell to Colotto at the far post but he could only control it and not get a shot off. Doblas came in and blocked the ball to keep Colotto from striking the ball. Jackichand Singh – The Next Indian Star

The second half began with an FC Pune City change. They needed reinforcements and it was clear that Platt saw it too. He brought on Tuncay Sanli for Verhoek who I felt was not really suited for this game. I’ll explain why I though he wasn’t suited near the end of this article.

Within the first few minutes of the second half Sanli made a difference by making a run that was spotted and met with a pass by Uche. Sanli got a shot off from acute angle but Doblas was equal to it.

The second half was end to end stuff with FC Pune City looking more dangerous on account of Sanli’s runs while Delhi Dynamos FC were looking threatening on the counter and the long ball. All in all, I felt that the quality of football improved from both sides in the second half.

A brilliant chance went begging by when Jackichand Singh dropped a gorgeous ball into the middle of the FC Pune City penalty box. The ball was met by a free header from Uche who could only direct it against Doblas. The header was saved and I bet Roberto Carlos’ heartbeat skipped a beat.

Soon after, FC Pune City brought on even more cavalry in the form of Didier Zokora who came on for Bailey. Zokora’s job was simply to get the ball back for FC Pune City and may be get the odd longshot off. While FC Pune City were dominating most of the second half, Delhi Dynamos FC were stringing together the odd attack. One in particular was brilliant with Dos Santos showing some sublime skills.

Another good attack came through a Riise freekick which was hit so well that it nearly squirmed through Steve Simonsen’s fingers.

Around the 66th minute, Delhi Dynamos FC also brought on Sehnaj Singh for Shylo Malsawmtluanga (Wow! What a name!). The final throw of the dice from FC Pune City was to take off Jackichand for Eugeneson Lyngdoh – one young Indian star for another young Indian star.

Just so you know Jackichand Singh was taken off because he worked his pants off in this game. His fatigue levels must’ve been through the roof. Lyngdoh’s first two balls into the box were so bad that even his mother won’t tell him that they were ok. He skied one freekick and one free cross.

It was clear that it was a case of the nerves for the youngster. But Lyngdoh turned that around with a subtle bit of skill beating two defenders near the baseline and crossing the ball in.

The mayhem Lyngdoh caused resulted in continued attack. This resulted in a penalty claim in the box and Maithani bowled over.

However, as many times as FC Pune City would come close, they would never break through… at least not before Delhi Dynamos gave them the knockout punch. Chasing the game comes with its own pitfalls. FC Pune City saw that first-hand when they were caught out of position and Delhi Dynamos FC doubled their lead through Richard Gadze.

The goal was made by Vinicius who dribbled along the base line and crossed gently to Gadze.

All Gadze had to do with the keeper stranded was tap it in. FC Pune City 0 – 2 Delhi Dynamos FC

FC Pune City kicked off from the goal and took the ball all the way to the other end through Lyngdoh. Lyngdoh dribbled, beat two men, and cross the ball onto the penalty spot. The keeper tried to stop the cross but only looped it up. Uche was running in and nodded it home. FC Pune City 1 – 2 Delhi Dynamos FC

The game was won on the back of a set piece. You can’t say much about that. Not a lot of tactics involved in a winner like that. It’s just one player switching off and another player pulling one over his opponent. It was well done by Robin Singh. His debut goal helped his team win the game and Kudos to the man for that. What can I say, I like his never say die attitude.

If you insist on pushing me to analyse the tactics of this game then all I have to say to you is that FC Pune City’s starting strategy was flawed. I think Platt tried to be too smart for his own good with the surprise selection of Verhoek in the centre forward position while Uche played as a wide second striker.

It nullified Uche in my opinion, even though it played to Verhoek’s strengths. I think it should’ve been the other way round with Uche being given the preference. Another tactical limitation of FC Pune City was that they wasted virtually every single corner.

Their corners would just never clear the first line of defence. They would unerringly hit the first man time and time again. It was evident that they haven’t been practicing defending freekicks or attacking freekicks much. What a pity because I like their brand of possession football.

Delhi Dynamos FC showed excellent attacking and defending skills in the game. They even managed the fame wonderfully, grabbing a goal in the end. Delhi Dynamos are defying my doom and gloom prediction. I hope they continue because their success heartens me and ensures that I remain humble because being right too often is just a bit too cheeky, eh?