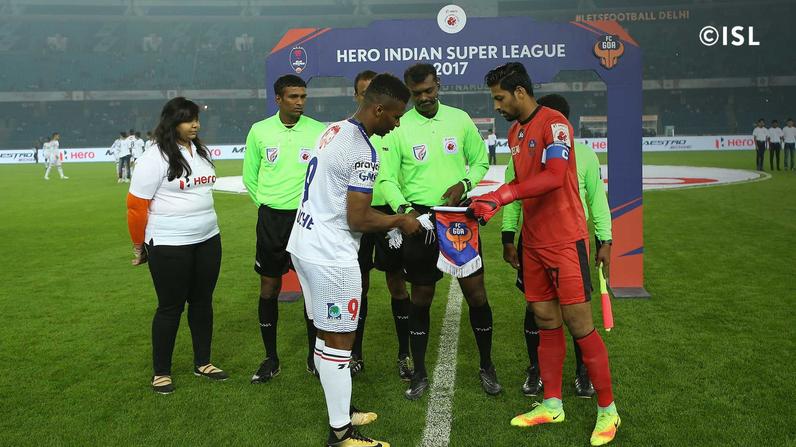 Cutting Edge Proves To Be the Difference

There was only one way that Delhi Dynamos FC was going to win against FC Goa and that was a smash and grab. This meant that Delhi had to score first and then shut up shop. Shutting up shop for them would’ve meant keeping the ball and using possession as a form of defence. But, the moment they went behind, their fate was set.

You can’t beat Goa at their own game. You can only beat them with a different strategy. The only team that has beaten Goa till now is Mumbai City FC and that was an inside (read Kattimani) job. To be fair to Delhi Dynamos, their entire strategy was based around Kattimani. I will call it the Kattimani Strategy. Kattimani winning award for not making a single mistake…

Delhi Dynamos’ challenge has always been the final third. They’ve lost a number of games despite dominating the midfield through their passing. This is largely because they don’t have players that can have an impact in the final third. They had one player called Marcelinho last year but they were cheap enough to not re-sign him.

At the beginning of this season, they had Matias Mirabaje but he got injured. He was there in the first and only game that Delhi Dynamos have won. He even scored in that game. Since he’s been gone, they’ve been toothless. Their striker Uche has been a dud so far but he hasn’t really been supplied by his team to make a difference. He’s partly to blame because when he has gotten chances, he hasn’t finished them off.

In this game, though, Delhi Dynamos tried something different. Their strategy in this game was almost childlike. Their entire attacking system was based on one player. The problem was that that player wasn’t in their team. They were playing because they expected Laxmikant Kattimani to mess up again. In fact, their strategy was to try and force him to do just that. This is why I dub this strategy the Kattimani Strategy.

So, the Kattimani Strategy is simple. You make the keeper do a lot of work because you expect him to make an error either under pressure or of his own mental demons. How do you do this? It’s simple. You do this by taking long shots even though there success rate is globally abysmal. You put in loads of crosses even though statistically crossing is the least productive way of attacking.

Essentially, you get Kattimani involved. Why didn’t it work? Well, Kattimani forgot his stuff in Goa and Delhi being the capital and all meant that getting ‘maal’ here isn’t easy. Besides, Delhi stuff will never be as good as Goan magic. Maybe Miguel Portugal should’ve had some stuff sent to Goa’s hotel anonymously.

I apologise for all these Kattimani and doping jokes. They maybe leave you in bad taste but this is the only way I can explain away the kind of errors he makes so damn consistently.

So, Delhi Dynamos put in many cross into the box and took lots of long shots. Kattimani didn’t bite though and along with his merry men defended well. Incidentally, Kattimani deserves praise. He didn’t make a single error in this game!

In order to be able to work Kattimani, Delhi Dynamos played higher up the pitch than they normally do. This meant that Vinit Rai was asked to hold his defensive midfield position as opposed to dropping into defence to receive and distribute the ball. This was too much of a change for him because it resulted in him almost turning invisible.

Delhi Dynamos matched their Kattimani Strategy up with a lot of physicality. Physicality, they should know by now, doesn’t affect Goa. Bengaluru tried it and it backfired. They should’ve studied that game. At the same time, I think everyone is going to be uber physical with Goa now. This physicality was accompanied by the high press.

The Bengaluru – Goa game again should’ve been the blueprint for Portugal. Goa are so good at passing that the high press doesn’t work on them. The physical high press worked for one player really well, though. It was Guyon Fernandez. The man revelled in this system. He has all the qualities for it. He is physical, he has stamina, and he likes to attack.

Why Fix Something That Isn’t Broken? Guyon Fernandez, in fact, was the most problematic player for Goa to deal with. He was all over their backline in the first half and could’ve scored a couple of times, if it weren’t for his poor finishing. He didn’t only press the Delhi defence but also pushed them back with his running and dribbling. If only Delhi had someone who could support him because Uche was useless.

Goa’s strategy was simple. They were to continue exactly what they’d been doing – pass from the back, build play up carefully, suddenly change the tempo of their attacks with through balls. Jahouh, Bedia, Lanzarote, and Corominas all excelled in their respective roles.

The First Half Was an Even Affair So, Goa went into the break with a 2 goal lead. Both those goals came in stoppage time. Despite this, the first half was quite even. While Delhi’s focus on Kattimani didn’t pay dividends, it kept Goa on the back foot. Goa helped Delhi Dynamos too by skewing their passing.

Their passing game was completely off in the first half. They kept giving the ball away through misplaced passes. I think there was an element of complacency in Goa’s players. Their passing clicked in first half’s stoppage time which is when they scored their goals.

Remember, Goa’s focus on the Delhi left flank? Well, that is where they got their first goal from. They won a free kick on that side which was taken by Lanzarote. It was an average ball but the Delhi keeper – Sukhdev Patil, decided to punch it. The punched ball hit a defender and rebounded back towards the goal. This is where Ferran Corominas bundled it in. Hence, Goa’s focus on the left flank did, indeed, yield results.

It is also worth mentioning that Goa were trying high press in some scenarios. My guess is that they weren’t told to go full tilt with the high press and were instead instructed to pick their opportunities. This is how their second goal came too. It came when Delhi Dynamos decided to play out from the back.

The ball into midfield was stolen by Edu Bedia. His interception was a pass to Corominas. Corominas slid in Lanzarote, who was making an out to in run. Lanzarote lobbed the keeper while being quite far out. If you look at replays, you’ll see him glance at the keeper even before receiving the ball. It was a special Goal. I feel that that goal is where Delhi Dynamos lost the game.

FC Goa Turn the Screw in the Second Half Delhi Dynamos may have gone into the tunnel two goals down but they came back out with a purpose. Portugal must’ve laid into them real good. They pulled a goal back at 62 minutes through some good attacking play. How did they score? It was my old favourite Romeo Fernandes.

Jeroen Lumu put in a slide rule pass for Romeo to run on to from the edge of the box. Romeo took it to the by-line before putting it on a platter for Uche. Uche tapped the ball in and Delhi had one goal.

This goal combined by the earlier substitution of Corominas through injury made me think that Delhi Dynamos will now come back into the game. Delhi had other ideas, though. Gabriel Cichero decided that he’s had enough of his teammates and showed his frustration by leaving his foot in a nothing tackle. It was silly. It was impetuous. And it was unnecessary especially from someone as experienced as Cichero. He received his second yellow and was sent off.

This killed Delhi Dynamos. All that was left to do was make it official. That was done by Goa’s Spanish B team of Manuel Arana and Adrian Colunga who had come on for Lanzarote and Corominas, respectively. Colunga took one goal and spurned multiple chances, while Arana ended up with two assists, one goal, and man of the match

Arana’s first assist was for the Pritam Kotal own goal. Arana just played a good ball across the Delhi Dynamos six yard box that Kotal deflected into his own net. Arana’s second assist came via a cross onto the far post that was met on the volley by Colunga. It was a good cross but an even better volley that saw the ball in at the near post.

Arana then scored his goal when Patil spilled a Colunga shot. While the goal had an element of fortune in it, the Goa move before it was sublime. It was a long move with multiple passes all over the pitch. What started as a difficult game for FC Goa turned out to be a walk in the park.