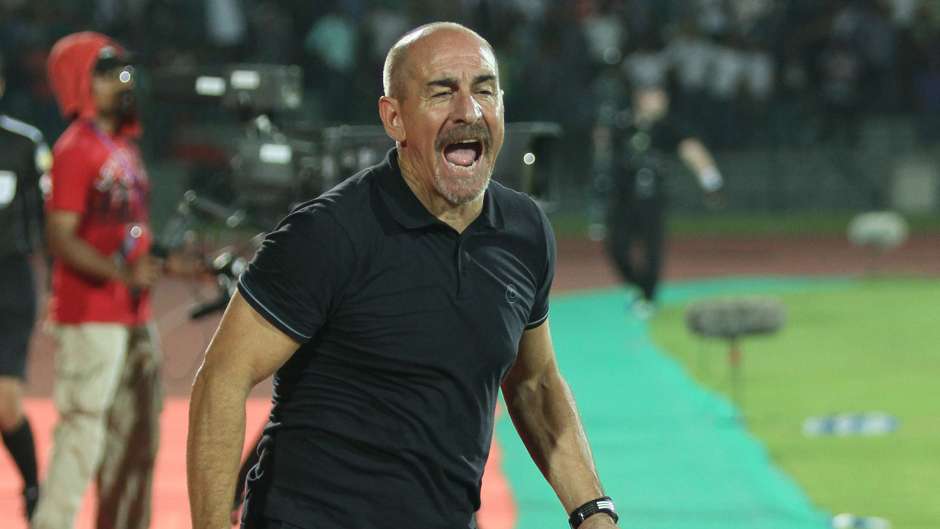 I was touting this game to be all about the technique of FC Goa going up against the physicality of Atletico De Kolkata but Kolkata surprised all of us. It seems that Habas the Henchman has decided to do exactly what I specified that they needed to do in my review of the four teams in the ISL semi finals.

Even though I said that Atletico De Kolkata needed to become more technical and attacking in nature, I certainly didn’t expect them to actually do it. There’s a warm glow that I’m feeling right now. Here I am beating around the bush and not telling you what exactly did Habas the Henchman do.

He decided to go with a particularly attacking formation of 3 – 5 – 2. This is a highly versatile formation because it provides flexibility.

What this formation means is that when the team is defending the wide midfielders will drop back into left and right back positions as the 3 central midfielders fall back to form a second line of defence in front of the 3 central defenders.

While attacking, the midfield pushes up altogether to support the two attacking players up front.

The real trick is for the left and right backs to push forward into attacking positions leaving behind a defence of 3 players.

You’re most probably wondering why I called this formation attacking in the case of Atletico De Kolkata. The reason is the kind of players Habas the Henchman chose to include in this formation. He had Jakub Podany (Pody) in the left midfield/back position and Baljit Sahni in central midfield position. Pody is an attacking midfielder while Sahni is a striker.

In addition to this, he had Luis Garcia and Mohammed Rafi in forward positions. Do you see why I called Atletico De Kolkata attacking?

Atletico De Kolkata also welcomed Arnab Mondal back into their starting line-up. I think Habas analysed FC Goa’s play and decided to stifle them in midfield. It worked for the better part of the match too. FC Goa made a key change to their team too by bringing on Bruno Pinheiro as a central defender in the place of Youness Bengelloun.

Bengelloun is a wonderful defender but Pinheiro, remember, is a midfielder first.

He allows FC Goa to build attacks from the back with good passes straight out of defence.

The other change was forced as Narayan Das was injured. Zico chose to play Peter Carvalho in his position.

A Tactical Battle Ensues Between Zico and Habas the Henchman In the initial stages, it was FC Goa who dominated the exchanges. At the same time, the game was highly tactical too.

The tactical nature of the game was not surprising especially if you consider the fact that Atletico De Kolkata unveiled a surprise with their tactics.

Despite the attacking nature of Kolkata’s line-up, it was still FC Goa who were dominating the game in the first ten minutes.

Defensively too, FC Goa were sound because they nullified all that Kolkata managed to throw their way. Mandar Rao Desai fell very awkwardly in the 13th minute following a tackle from Josemi. The tackle was clean.

For some reason, Mandar landed on his shoulder and spun like a top on it to. That must’ve hurt.

The first great chance came for Miroslav Slepicka who actually decided to shoot from a strange position.

He was turned away from the goal outside the box and decided to turn and try a curler. He had the Atletico De Kolkata keeper Apoula Edel, who dived full stretch to save it, very worried with that shot.

In the last 10 minutes, Atletico De Kolkata grew in confidence and started asserting themselves a little more. They gained more possession and strung together more passes. They even reached FC Goa’s box a couple of time. However, they lacked the cutting edge that was needed. Immediately in the second half, FC Goa were on the front foot through Romeo Fernandes. It was interesting to note that Atletico De Kolkata had changed their formation.

They chose to take off Lester Fernandez to bring on Kingshuk Debnath and revert to their 4 – 4 – 2 formation.

This wasn’t the Atletico De Kolkata I knew. They were showing some flexibility, versatility, and ambition in this game with their formation changes and attacks. I think it came as a surprise to Zico too.

In the 56th minute, FC Goa had a very interesting penalty claim. It looked like a penalty to me solely because Arnab Mondal didn’t play the ball. He was very far away from it, in fact, when he tackled Andre Santos.

So that means Atletico De Kolkata get a lucky penalty in the first leg and FC Goa get denied one in the second. It’s a pity that such poor decisions have the potential to decide the fate of two teams. In the 60th minute, Atletico De Kolkata took off Luis Garcia for Jofre Gonzalez because of a hamstring injury. Kolkata had a good chance from a freekick in the 65th minute which the birthday boy Jan Seda managed to flap away.

You know, I have been upping Romeo all this while but this chap Bikramjit Singh isn’t bad either. He does all the dirty work very quietly and efficiently. He plays with intelligence too. FC Goa have some really talented Indians in their team.

7 minutes later, Santos had Edel save a shot from him with his legs. It was sheer luck for Edel who didn’t know anything about it and was actually in the midst of a mistake.

It was all FC Goa from that moment on as Atletico De Kolkata reverted to type. They sat back defensively, were overly physical, and showed no ambition whatsoever.

It was almost like Habas the Henchman tried his new attacking strategy and when it didn’t work fell back on his tried and tested methods. Pity! Kolkata’s strategy, by the way, took us into extra time. Before the extra time began, Zico decided to bring on Tolgay Ozbey for Slepicka. This was Ozbey’s first game after he got injured during the league phase.

The whole of the first half of the extra time was about FC Goa trying to unlock Kolkata’s defence.

The match had also gotten slow because of fatigue affecting the players. It’s natural for this to happen even though it is more accentuated in the Indian Super League.

In the 98th minute, Kolkata made something happen but they couldn’t find that key piece of skill. I would like to point out here that Sanju Pradhan was playing really well and showing some good skill.

In the 102nd minute, FC Goa almost made it through and who was it to make the big play – it was Romeo!

He beat 2 to 3 defenders (depends on your perspective) to run into the box and get a shot off. The ball rebounded back to him so he set Mandar up for a shot. Unfortunately, Mandar could only shoot straight at the keeper.

In the second half of the extra time, Zico decided to bring on Clifford Miranda for Mandar. I think Zico was trying to get his more experienced players onto the pitch at that time with the penalty shootout in his mind.

Kolkata matches that substitution by bringing on Cavin Lobo for Sanju. Fresh legs and experience were all that mattered at that stage of the game. And so, we moved into the first penalty shootout of the Indian Super League. Santos showed up for the penalty and, like all his shots on the day, skied his penalty shootout. After him, Ozbey scored but Amiri missed.

Atletico De Kolkata scored each of their goals and won the game on penalty by 2 – 4.

The other scorer for FC Goa was Miranda while the players who showed composure and calm for Kolkata were Josemi, Rafi, Jofre, and Borja.

This means that Atletico De Kolkata move on to the final in Mumbai to meet Kerala Blasters FC while FC Goa join Chennaiyin FC on the side-lines. They would’ve only themselves to blame for not finishing the chances they got.

Moreover, I have to give it to Atletico De Kolkata. While their style doesn’t really benefit Indian football because it’s not encouraging for youngsters, I have to say that it proved to be effective. Well played to them. They were efficient and effective!