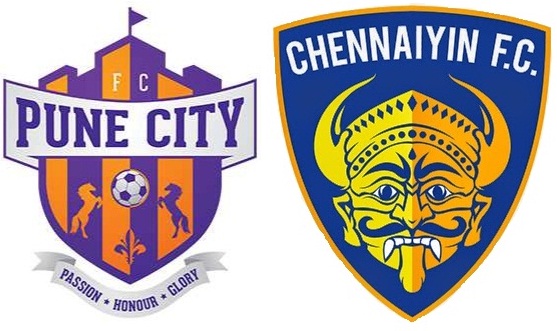 Hello. Just thought I’ll continue the ‘H’ theme into the first paragraph. Don’t worry, it will stop now. Chennaiyin have claimed the second spot on the table but they didn’t do it with style. They did it with grit, perseverance, fitness advantage, and opportunism.

At the same time, are we all that surprised that FC Pune City have failed to beat Chennaiyin FC again? Are we all that shocked that Pune City have failed to keep a clean sheet against them again? We shouldn’t be. After all, Pune have never done either of those things in the history of Indian Super League. Numbers now show Chennaiyin as having won 5 out of 7 games played between these two sides. The other two ended in a draw. To be fair to FC Pune City, they did start this game with a clear disadvantage. Their opponents were rested while they were coming off of a very difficult game – the Maharashtra Derby. In case you want specifics, Chennaiyin’s last game was 10 days in the past while Pune played 4 days ago.

This fitness divide showed quite clearly by the end but Pune City shouldn’t have let it go that far. They clearly had the better of the first half. They had the better chances and Chennaiyin were mainly on the back foot throughout the first 45. Pune City players were quite confident and comfortable in how they passed the ball around the pitch in the first half. But, for some reason and this is prevalent in the entire ISL right now, they failed with their final balls.

Chennaiyin FC Came for a Draw John Gregory came for a draw in this game. Chennaiyin FC were set up to not lose first. Their intention was to frustrate Pune City. It was a decent enough strategy if you consider the kind of players Chennaiyin have on the whole. The strategy becomes even more sensible if you compare the attackers between Chennaiyin and Pune City.

On one side of the ring, you have Marcelinho and Emiliano Alfaro and on the other you have Jeje Lalpekhlua and Raphael Augusto. It’s a no match. It’s a no brainer. Nationalism and patriotism aside, I don’t think Jeje’s candle stands a chance against Alfaro’s flamethrower. Alfaro is the second best (Ferran Corominas) if not the best striker in the country right now and Jeje hasn’t even scored a single goal.

Similarly, Raphael Augusto’s measured attacking skills cannot be compared to the free flowing offensive verve of Marcelinho. Its, simply, not a match whichever way you look at it. Besides, Augusto is more of a central midfielder who is being repurposed into an attacking role because Chennaiyin don’t have anybody to shoulder that mantle right now.

As a result, Chennaiyin players were given defensive tactics and told to put defence before everything else. Their offense was limited to speculative efforts that consisted of long balls and long shots. It is probably because of this that they were on the back foot for most of the game.

It is also because of this that their most creative player on the pitch – Gregory Nelson was so ineffective. He had no support and couldn’t find the opportunity to run at his marker. Baljit Singh Sahni, of course, deserves praise for shackling Nelson without hacking his leg off in frenzy.

Alfaro stood out; Marcelinho Was Poor Who was the most effective Pune City player? Emiliano Alfaro, of course. Alfaro even had the ball in the net but the goal was (rightly) disallowed for offside. He was sharp to react and even connected well a few times with marceli… sorry Isaac Vanmalsawma. No, he didn’t really combine with Marcelinho, leave aside combine well. This was largely because Marcelinho played this game like he wasn’t interested.

Marcelinho didn’t do a lot in this game. He was visible in the first half but his decision making was suspect. He would get the ball beat his marker and let fly at the goal. All that is good but the problem was that his positions were so wide that those shots looked amateurish. I counted at least two times when he tried to squeeze ball in through the near post an acute angle when crossing or cutting the ball back were better options. The one time he did cross, he created chaos in the box.

The closest Pune City came to scoring was when Vishal Kaith erred by coming for a cross from the left. He missed the ball, which was sent towards the goal by a Chennaiyin player with a weak shot. Unfortunately, the shot wasn’t strong enough and Rafael Lopez managed to reach it for a goal-line clearance. In the second half, Chennaiyin took advantage of Pune City players’ fatigue. Their goal was simplicity itself. It came from a corner when the substitute Jaime Gavilan put in an inswinger. Henrique Sereno rose the highest at the near post to nod the ball in through the legs of a Pune Defender. The delivery was excellent and the header emphatic.

After that Pune City tried to launch a few attacks but they were just too tired to be arsed. Without a concerted and effective effort, Chennaiyin FC saw the game out fairly comfortably.

A word on Gavilan: he looks like a very good player whose speciality is set pieces. I think he deserves to start a game for Chennaiyin. He has now come on as a substitute in two games, which has translated to a total of 35 minutes. However, in those 35 minutes, the guy has created a goal, and at least 3 goalscoring chances for his team. Doesn’t that merit a starting berth?