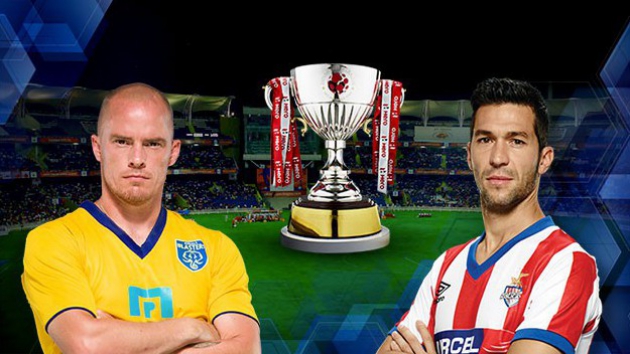 Ok, let’s begin with a confession. I’ve never bothered with opening and closing ceremonies and the way I’m doing I doubt I ever will. What I have a tendency never to miss though is finals. I sit here with a stiff drink and even stiffer chips on a very soft seat looking forward to watching the ISL Final.

In terms of team news, it seems that I was wrong about Kerala Blasters not having their 1st and 2nd choice keepers. David James chose to give himself what could be his last ever start in a professional football game.

Other new names in the Kerala Blasters starting line-up were Saumik Dey at left back and Nirmal Chettri at right back. Sandesh Jhingan moved into central defence.

Atletico De Kolkata had to endure a heavy blow before the game as Luis Garcia and Lester Fernandez wasn’t deemed fit enough to start the game. For those two, Arnal Llibert and Kingshuk Debnath came on. Unsurprisingly, Kerala Blasters were the more attacking of the two teams even though Atletico De Kolkata started in their 4 – 4 – 2 formation.

Both teams were set up to be attacking but it was really Kerala who looked more comfortable in the opponent’s final third.

Within the first 10 minutes, the most interesting part of the game was that David James wasn’t moving as freely as you would expect him too.

He was moving gingerly and was being very careful with his clearances. I wondered if that would be something that would end up causing problems for Kerala Blasters especially if the ISL Final was to go to penalties. What was clicking for Kerala Blasters, though, was their attack. In the 11th minute, Victor Herrero Forcada (Pulga) created good space for himself in the 18 yard box.

He got a shot off but it was blocked off. Ishfaq Ahmed was right behind Pulga by creating a wonderful opportunity of his own from outside the box.

He tried for the near post after beating 3 Kolkata players but Apoula Edel proved a match for his shot.

Referee under the Spotlight In the 25th minute, Atletico De Kolkata showed what they’re capable of. Their midfield set Mohammed Rafi free in the middle of the pitch who showed great skill to control the ball.

However, he couldn’t be the man to win the ISL Final for his team because Chettri came in and fouled him clumsily. It could’ve been a red card but the referee chose a yellow card instead.

I wasn’t entirely sure which card it should’ve been because there were other defenders in line but not ahead. So that was one where interpretation of the rules comes into play. Atletico De Kolkata’s best chance came as a twin. The ball was crossed from deep on the right flank and Rafi got to the ball too but James had positioned himself flawlessly.

This was followed by a long range shot from Jakub Podany (Pody) towards the near post which James saved too.

Iain Hume came up with a brilliant freekick in the 39th minute. His shot went up and over the wall and towards Edel’s right corner. Fortunately, Edel read the shot and managed to palm it for a corner.

After those chances, the ISL Final became scrappy with both teams giving the ball away in quick succession. That’s how everyone went into the half time break.

Exchange of Blows Continues In the Second Half Atletico De Kolkata started the second half on the front foot. Their aggression seemed to have surprised Kerala Blasters because they got pegged back and made some unforced errors.

However, they recovered very quickly and very effectively. Michael Chopra was set free at an acute angle in Kolkata box and got a ferocious shot off towards the top corner.

However, Edel again stood strong and unconventionally chose to punch it away with one hand. Normal service resumed after that as Kerala Blasters continued to dominate. Hume was set free to run at the keeper but I believe his age caught up with him before he could reach Edel. Once the one on one evaporated, there wasn’t much he could do.

However, Kerala Blasters continued to attack looking for that elusive goal while Atletico De Kolkata courted it in the way of counters. On one of those counters, Sandesh Jhingan almost scored another own goal.

Another counter resulted in Arnal being free from an acute angle. Still, he had James on a one on one but couldn’t even work him. His shot went high and wide and James stood there unruffled.

The Red Zone of Fatigue and Mistakes Begins After that flurry of attacks, as fatigue set in, the game became slower after the 60th minute. I believe that it wasn’t just fatigue but also mental jitters of playing in the ISL Final that kept the players from playing freely. They simply became safer and safer as the clock ticked on.

Neither Chopra nor Hume looked tired in the 83rd minute though. Hume rand free on his team’s left flank and cross but his cross was deflected. The ball fell to Chopra who first fought hard and then bedazzled the defender to get his shot off.

He didn’t consider Edel in his equation, though, because Edel pulled off what could’ve been the save of the whole season. The shot was almost point blank. At the same time, Edel managed to somehow palm the ball away onto the post. The ball glanced off the post and went out for a corner. I believe the corner was taken by Polga. The corner came from Atletico De Kolkata’s left side and the shortest players on the pitch at that time rose tall and proud to head the ball into the bottom corner on James’ right side.

James dived full stretch but even the legendary James couldn’t have done anything to save that header. The funniest thing was that the goal came right at death. There were 3 minutes added by the referee and the goal came when the 93 minutes had already gone by. Rafique just headed himself into the history books with the first goal in the ISL final.

Kerala Blasters looked unbelievably dejected. I didn’t think it would’ve mattered to them so much to win the final. One of the most disappointed players on the pitch was James. He actually went and sat at the bench for a good 15 minutes staring into space.

Colin Falvey had tears in his eyes as did Jhingan and other Kerala Blasters players. Sachin Tendulkar actually came onto the pitch to console his players. He’s a part owner of Kerala Blasters, in case you didn’t know.

The most heartening part of the game was that when the final whistle was blown, Atletico De Kolkata players celebrated for a minute or two and then went to the Kerala Blasters players. You could see them consoling their opponents in the most sporting manner I have ever seen.

Atletico De Kolkata may not play the most beautiful football in the league but they do play it in the most effective way. I may not like their intimidation and physical tactics but today they showed empathy and heart when they went to console their opponents after winning the game. It was good to see and must be appreciated.

The champions of the Indian Super League needed to be special. In the ISL Final, Atletico De Kolkata showed why they are special. I tip my hat to you good sirs. They deserve the win.