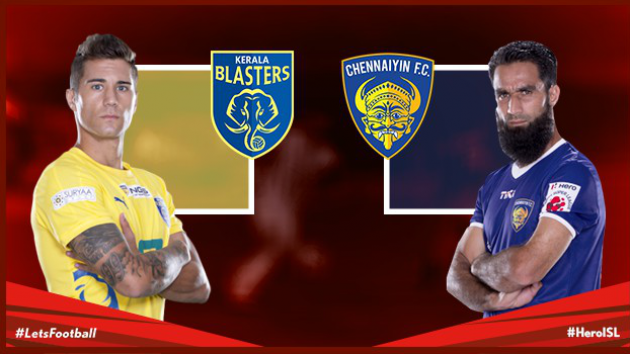 A Topsy-Turvy Game between KBFC and CFC

So, five games without a win and four straight losses, Kerala Blasters FC are proving all my predictions true. What’s more is that they’ve actually ditched their manager, Peter Taylor. I didn’t go as far as suggesting that Taylor will be sacked in the article linked above but I have to say that I’m not that surprised. Oh and by the way, I don’t care what Kerala Blasters FC’s release says about “mutual agreement”, Peter Taylor was sacked!

At the same time, I don’t think his removal will make any big difference in Kerala Blasters FC’s future performances. They will continue to suck and suck royally like they’ve been doing. Why? Simply because their squad isn’t strong enough or balanced enough. Squad building was to be done before the Indian Super League 2015 season began. It’s too late now.

Chennaiyin FC aren’t in the best form either. They’ve only won 3 of their last 6 games which shows that they can be quite inconsistent. Kerala Blasters FC would be looking to leverage that in some way. Even though I’ve rung the bell of doom for Kerala Blasters FC, the team news makes me feel very positive. Trevor Morgan, the interim caretaker manager, chose to deploy Sanchez Watt and Chris Dagnall both.

In addition to these two strikers, Morgan even put in the high flying Mohammed Rafi as the third striker. These are moves that I fully support.

Essentially, Kerala Blasters FC made 3 changes in their first team with the entry of Watt, Saumik, and Bruno Perone for Josu Currias, Marcus Williams, and Shankar Sampingiraj.

More than the change in personnel, their change in strategy was interesting to watch. Chennaiyin FC, like Kerala Blasters FC, made 3 changes to their first team. They brought in Jeje Lalpekhlua, Sena Ralte, and Alessandro Potenza for Dhanachandra Singh, Bernard Mendy, and Jayesh Rane. Chennaiyin FC would continue to rely on the league’s best front strike pairing of Elano and Stiven Mendoza.

The defining element of this match will be how well Kerala Blasters FC’s midfield performs against Chennaiyin’s midfield. The midfield battles will determine how effective Elano and Mendoza are going to be so I expected Kerala Blasters to really try to get between the Chennaiyin midfielders. At the same time, team selection showed that Kerala Blasters FC will sit back and try to counter with pace. I was curious to see if that worked out for them. The first half began in a very dynamic manner. Both teams looked fired up and determined to attack. It was end to end stuff. Every time one team would attack, they would camp in the opposition half for a good one minute before the other team would get the ball back and return the favour. It bode well for the entertainment value of the match.

The first real chance fell to Kerala Blasters FC when Dagnall broke through the offside trap with a scoop finding him from the midfield. He crossed the ball to Watt but his shot was blocked crucially by Mehrajuddin Wadoo.

By the 15th minute, the early first half intensity had dropped a little with both teams settling down into a steady rhythm. It was dull for the next 15 minutes with both teams working hard.

The second great chance of the first half also fell to Kerala Blasters FC. From the outside of his boot, Joao Coimbra dropped a long ball in the middle, behind the two Chennaiyin central defenders. Dagnall had run that channel, he collected the ball but couldn’t finish as Karanjit Singh smothered the ball. Despite the fact that Kerala Blasters FC had the better chances of the first half, it would be Chennaiyin FC who would take the lead.

They would do so through a soft penalty given away by Sandesh Jhingan.

The ball was tossed in from the right flank, Mendoza backed into Jhingan whose clumsiness caused him and Mendoza both to fall over. It was very weak, cheap, and soft. Elano stepped up to take the penalty and stroked the ball in with sheer nonchalance. Kerala Blasters FC 0 – 1 Chennaiyin FC In the 37th minute, Chennaiyin FC’s Mendoza fashioned a wonderful chance for himself. His shot on the turn, however, was parried by the Kerala Blasters FC’s keeper, Stephen Bywater.

Soon after, an injury to Coimbra saw him being replaced by Josu.

KBFC would get another chance in the last minute of the half. Rafi broke the offside trap to receive a scooped ball on his head. Rafi got to the ball first even though the Chennaiyin keeper was rushing in. Unfortunately, he couldn’t guide the header into the gaping goal.

KBFC Strike Back Within 15 Seconds into the 2nd Half Within 15 seconds of the second half, Kerala Blasters FC were level. The goal was founded on a peach of a cross from the KBFC left flank. The cross was orgasmic.

The ball came in fast, curling and perfectly placed from Saumik Dey (what a selection by Morgan!). In the box, Chris Dagnall was darting in between the two Chennaiyin defenders. He dived in to finish the move. Kerala Blasters FC 1 – 1 Chennaiyin FC

Chennaiyin FC almost struck back instead of reeling from the goal. The ball was laid off to Mendoza on the edge of the KBFC box. His snapshot from the outside of his right boot just curved wide. In the 50th minute, the game would almost turn on its head as Kerala Blasters FC won a penalty virtually as soft as the one that Chennaiyin FC had one.

The penalty was won by Peter Ramage who fell to the ground because of soft contact from Mailson Alves.

The penalty was taken and wasted by Josu as Karanjit Singh saved the shot.

Kerala Blasters FC would get another chance a few minutes later. The chance came from a freekick delivery from the KBFC right flank. Peter Ramage almost got to the ball. Even when he didn’t the ball could’ve gone in if Singh hadn’t deflected it away.

Chennaiyin FC under the Cosh In the 61st minute, KBFC got another chance from another freekick from Josu.

The freekick was perfect and fell to Dagnall who stooped to guide it. The header was aimed well but Karanjit Singh was equal to it.

The parried header then fell to Jhingan who couldn’t direct it goalwards.

Chennaiyin FC were definitely under the cosh at this moment. In fact, they were having trouble getting out of their half. What’s more is that they were losing their composure by committing fouls and earning yellow cards.

Chennaiyin FC would create one great chance though. It was a shot from outside the box that had Bywater fully stretched in what was an acrobatic save.

Kerala Blasters FC Get a Player Sent Off Kerala Blasters FC then lost the plot for some reason. The red card was awarded to Bruno Perone for a foul on Mendoza. The foul was more than deserved as Perone kicked out at Mendoza’s and connected his face with his heel.

It was a strange one as the kick was totally uncalled for. So much potential of the second half, wasted by Kerala Blasters Fc in a single act of madness.

Immediately after, Kerala Blasters decided to shut up shop and sit back. On the other hand, Chennaiyin FC didn’t show any significant ambition either. Draw was a good result for KBFC so it made sense for them. Chennaiyin FC should’ve done more.

This was a strange game. I have no qualms about saying that. So, analysing this game tactically would be a difficult task.

The highlight for me in this game was the daring strategic change from Trevor Morgan. It would’ve been safe for him to just continue for Taylor had been doing but he took charge and stamped his managerial authority on the game by starting hir three main strikers simultaneously.

I liked how he deployed Watt. Watt was, essentially, Morgan’s playmaker with his quick change of directions, hold up play, close control, and creative passing. Dagnall and Rafi acted as target men in different moulds. While Dagnall was the channel runner, Rafi was the target man.

On the defensive side of things, I also liked how Kerala Blasters FC managed to block the connection of Elano and Mendoza. It was a simple enough strategy that involved man marking them both in a rotational manner. Their strategy could end up being the blueprint for other teams if they choose to pay attention.

The second half was particularly interesting because Kerala Blasters FC seemed to have decided to use their height advantage over Chennaiyin FC. It worked too as they scored the equaliser. However, one stupid panicked action from Perone destroyed their strategy.

As soon as Perone went off, you could see Kerala Blasters FC deciding to settle for the draw.

Chennaiyin FC did what they always do. Although they could’ve tried to counter Kerala’s counter of the Elano – Mendoza connection better. More importantly, once Kerala Blasters FC went down one man, Chennaiyin FC should’ve pushed for the winner. Instead, they decided to settle for the draw as well.