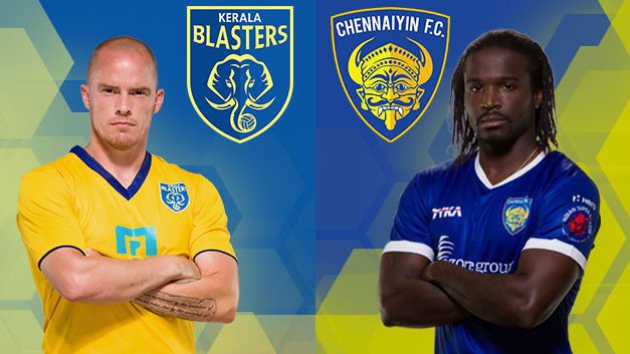 The second round of the Indian Super League begins today. Of the four teams, each of which has its own strengths and weaknesses, we see the team which came 1st and 4th.

That’s right folks it’s an old fashioned attack vs. defence affair as the whole of Indian media seems hell bent on drilling into you. I didn’t buy into that convenient drift that most mainstream media articles took. You shouldn’t have either.

My contention before the game was exactly the opposite in the post about ISL semi finals. I thought that Chennaiyin FC will win this one if they can defend as well as Kerala Blasters FC and Kerala will win if they can attack as well as Chennaiyin.

Kerala Blasters started with Michael Chopra and Iain Hume both while Chennaiyin had 5 defenders in addition to two defensive midfielders in Eric Djemba-Djemba and Denson Devadas confirming my suspicions.

Why did I suspect this? It was simple really. This was Kerala’s home game. They needed to attack because they needed the advantage in the first leg. Besides, why would they work to tighten something that they’re already good at particularly when need to score?

Similarly, a draw would’ve been a good enough result for Chennaiyin. Moreover, they knew that they’ll score goals anyways, especially with Elano back. So they set up to prevent Kerala from scoring while relying on Elano and even Balwant Singh to come up with the goods. At the outset, Kerala Blasters started on the front foot with Hume and Chopra combining like they’d been playing since they were chaddi buddies.

Michael Chopra, incidentally, qualifies to play for the Indian national football team despite being born in England.

In fact, he wants to play for India. I think he needs to lose some weight first.

It won’t matter because he will play for India sooner or later, whether he trims down or not. What’s more, he’ll actually add to the Indian national team.

Kerala Blasters had more attacks but it was Chennaiyin who had the better chances. There were namely two both from Jeje. He spurned both. Jeje is supposed to be one of the more important players for India but he hasn’t been able to show the same quality in the Indian Super League. Kerala put the ball in the net in the 26th minute through Jamie McAllister when a freekick came in from Chennaiyin’s right flank. The freekick was taken by Hume.

The goal unfortunately was denied to Kerala Blasters because McAllister was offside.

It didn’t matter much because in the next minute Kerala Blasters had the ball in the net again. This time it was Ishfaq Ahmed who finished it from the right side into the far corner.

It was a wonderful finish but the goal was set up by Victor Herrero Forcada (Pulga) who was growing in influence. His pass was well weighted and timed. More importantly, he took out the man who was trying to catch up with Ahmed. Kerala Blasters FC 1 – 0 Chennaiyin FC Two minutes later, Kerala Blasters were in dreamland. They scored another and this time it was Hume. Granted, it was a lucky deflection that brought the ball to him but his finish was sublime.

When the ball came to him, he was actually facing away from the goal near the penalty box. But, without controlling the ball, he swivelled on his left foot and put the ball into the roof of the net.

Ahmed was involved again because he was the one who hit the ball that deflected off the defender onto the path of Hume. Kerala Blasters FC 2 – 0 Chennaiyin FC After that goal, Chennaiyin showed more drive and motivation even though they looked troubled, rattled, and shocked by the events.

But, they couldn’t really do much largely because of a player known as Mehtab Hossain.

Hossain is the guy that James and Trevor Morgan (assistant coach) chose to shadow Elano. He was doing a good job too because Elano’s influence on the game was largely non-existent.

Not to take anything away from Hossain but it could also be that Elano was not 100%. I think he was also missing Stiven Mendoza.

In the dying minutes, Kerala Blasters could’ve increased their lead a couple of times but for great defending from Alessandro Nesta. The score line remained the same, though, and the game didn’t become unsalvageable for Chennaiyin.

No Away Goal Rule in These Knockouts

Before the second half begins, let me clarify on the rules of the knockout stages of the Indian Super League. I speculated earlier that they might have the away goals rule but it seems that they’ve chosen not to.

Instead, the total goals scored will count to decide which team goes through. If the aggregate is still equal then the two teams will go into extra time. This means two additional periods of 15 minutes each. If the result is still unresolved then it’s the penalties.

I don’t know what I feel about this. I haven’t been a big fan of the away goal rule but neither do I like penalties. Replays come with their own problems too. I guess I don’t have an opinion here because each of the options has its own pluses and minuses.

A Slow and Ponderous 2nd Half from Chennaiyin FC Within a few minutes of the second half it was clear that Chennaiyin FC would try to turn it on. A surprise was the substitution of Elano with Pelissari. I would’ve left Elano on and so would any other manager.

Moreover, they also showed him with an ice pack on his calf. I believe that was because of the previous injury as opposed to him getting a new injury. Effectively, I think Elano wasn’t completely fit. This explains his lack of influence too.

For the better part of the first half, Chennaiyin FC’s attacks were poor and slow but you got the feeling that they were just biding their time. They could easily turn on the style when Kerala Blasters go to Chennai on Tuesday.

An Exciting Moment in the Second Half One of the best moments of the second half came for Kerala Blasters. It was a series of chances which were largely foiled by Gennaro Bracigliano and his defence. Andrew Barisic got off a good shot just outside the 18 yards box.

The keeper saved but not comprehensively enough. The ball spilled into the path of Stephen Pearson whose shot was blocked by a defender.

The ball fell to Barisic again who tried to head it in but this time the keeper pulled off another great save.

That could’ve been lights out for Chennaiyin, regardless of what they think they could’ve done in the second leg.

One of the Best Goals of the Tournament In the 94th minute, we got to see what could have been the goal of the season if Mendy hadn’t scored that bicycle kick. The goal came from Sushanth Mathew who was all alone in Chennaiyin’s half.

He ran at two defenders on the right flank – Mikael Silvestre and Nesta. He checked in and sent Silvestre out of contention. He proceeded to wrap his left foot around the ball and put it into the far corner from well outside the box.

The ball curved around Nesta went higher than the crossbar before dipping back into in. That was a superb goal. Kerala Blasters FC 3 – 0 Chennaiyin FC

So, Chennaiyin not only failed to score but actually managed to concede another goal to increase the deficit. This was definitely a bad day at office for Chennaiyin. I wonder if it’ll prove to be too much for them come Tuesday. I have a feeling it just might…