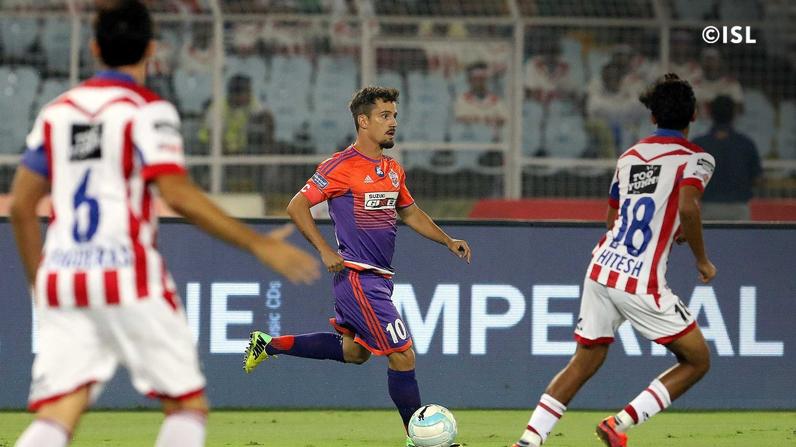 A Tale of Goalkeepers and a Brazilian

This post is going to be a compendium pack of four match reviews including the draw between KBFC and Jamshedpur, the Kattimani show where MCFC won 2 – 1 against Goa, and the maulings of ATK and Delhi Dynamos by FCPC and Bengaluru, respectively. But first, we have a message from our promoters.

Four games have gone by while I’ve been enjoying time warping nature of the Marryverse. You see, it was my marriage anniversary (Marryversary, if you will) and I was too busy enjoying it. I do like the word Marryversary. The word is ideal for nerds because, well, I have a theory. When nerds fall in love and get married, they create their own pocket dimension comprising multiple Marriage Universes (Marryverses). In each of those Marryverses, they marry the same unfortunate woman so they can torment her with their silly, pseudo-scientific, and highly self-indulgent theories of parallel universes involving marriage. In some scenarios, the corollary of a self-indulgent football blog is also known to have been derived.

Onto the review then: this period of three days has been about keepers. Keepers have ruled the back pages in one way or another. Goans would probably be banning all intoxicating substances and as proof of its harmful effects on the mind will cite Kattimani’s performances. On the other hand, Albino Gomes, Amarinder Singh, Paul Rachubka and other keepers have all performed well in this period.

For me, this period is a tale of a few keepers with the exception of one Marcelinho. Is he a keeper in disguise of a forward, you think? Maybe that’s why he knows how to get around them so well? You know, before the Indian Super League began, a lot of people were calling Paul Rachubka a weak link for Kerala Blasters FC. Rachubka, on the other hand, just decided to prove all those naysayers wrong with his performances on the pitch. In both KBFC games till now, Rachubka has been the standout performer. He has consistently outshone bigger names like Berbatov in his team. His saves have kept his team safe and brought it 2 points from 2 games.

Against Jamshedpur, Rachubka was particularly in great form. He pulled off some really low probability saves that kept his team in it till the last whistle. I counted at least three crucial saves. The kind of saves most keepers make once or twice in their entire careers.

It’s not even like his team was dominating and all he needed to do was keep his concentration. He was under pressure because his team didn’t really dominate that game. Their best chance came through an acute volley from Dimitar Berbatov off a corner kick. It was a low probability shot but Berbatov still managed to test the keeper by volleying the ball into the ground in front of him.

On the whole, though, I feel that one point each was a decent result for both teams and, more importantly, a fair outcome. Step forward Laxmikant Kattimani. I have a spoonful of water (chullu bhar paani?). Kindly dive into it and wash off all that stink of incompetence and embarrassment. Before you do, hand over all the contraband so Goa fans have something to be happy about. It was the second half again that Kattimani decided to go AWOL. I definitely want what is in his locker and in his Chillum. I also hope that Kattimani didn’t drive home. He’d probably end up in Delhi, the way he messes up.

After the last game, I didn’t think it could get worse for Kattimani but the man had something else up his sleeve. His game felt like he was trying to get Goa to lose in that game. We felt that that danger had passed. But, it hadn’t.

His efforts to get Goa to lose bore fruit in this game. I’m not implying that he had fixed the game or anything. It was pure incompetence from Kattimani that did it. In fact, if he had deliberately tried to get Goa to lose, he’ll probably end up scoring a hat trick of goals and muck that shit up too.

Shame! Someone get that nun from Game of Thrones and make her walk behind Kattimani.

On the other end of the pitch, Amarinder Singh did well for Mumbai City FC. His performance made Kattimani look even more of a dud. Amarinder Singh kept Lanzarote and his innovation at bay with help from the woodwork. How about that lob though. Messi will be proud of that dink.

Both Mumbai goals were forked over by Kattimani. The game should’ve gone to Goa on the evidence of their game. They played beautiful, flowing, and effective football. Their game is quite amazing. Their one touch passing, free flowing movement, and wonderful (almost) finishes are glorious to watch.

Kattimani is the reason they lost and there can be no doubt about it. Kattimani needs to be dropped in the next game. Lobera, please contact me; my ten month old can perform better than your current keeper. A lot of you, after reading my last post, are probably thinking I have egg on my face. I had tried to explain what I feel is wrong with FC Pune City. I’m sorry guys but one swallow does not a summer make. That is half a quote from Aristotle by the way. Look up the rest, it’s quite interesting. My point is that this win from FCPC is a great step in the right direction but that is the nature of systemic problems – they’re long term not momentary.

Therefore, the only way FCPC can prove that theory wrong is by reaching the playoffs and overturning their history of poor league standings. As for this game, I have to say I saw much more passion from their players. So, maybe I didn’t get the whole egg on my face but I may have gotten a piece of the shell?

Having said that, they won this game because of one man – Marcelinho. He ended up with 2 goals and 2 assist for heaven’s sake. That is a one man army. It is impossible to get a performance like that from one of your players and then lose the game. Signing Marcelinho was a master class but even a player like him can’t paper over the cracks inherent in the team. The team has to improve. I hope they do because Marcelinho deserves better along with the city of Pune and their fans. You want to see a team that is well-run? Look south. Look at Bengaluru FC. This is a team that doesn’t rely on individuals. It is a team that works like a team. Even their janitor probably wears the badge on his overalls. They’re cohesive, coordinated, passionate, and loyal. Their victory was a proper team victory. It doesn’t matter that they play with crosses or long balls or with big people and physicality.

Style of football is a preference but you can’t not appreciate winners when you see them and Bengaluru FC are that. They beat Delhi Dynamos black and blue. It was men against boys and nothing typified that more than how Bengaluru nullified Chhangte and his cohorts.

Heck, Delhi barely got out their half. Every time, they would get the ball, Bengaluru players would be on them like a pack of wolves. The high press deployed by Bengaluru FC is how it is done. They hounded Delhi players so well that they kept making mistakes. I want to see the unforced errors/dispossession count of this game. I’m certain it’ll be high for Delhi.

Do you want to know how badly Delhi players were dominated? Look at the number of saves Albino Gomes made. That guy had a better game than Paul Rachubka and still gave up 4 goals. I counted 5 separate saves from him. On top of that, there was that time when the ball hit the post.

Albino’s defenders left him so high and dry and he had to do so much in the game that he ended up making a mistake on the last goal. He should’ve saved that much but by that time he had already faced more than 10 shots. Everyone has an error in them. One in ten isn’t that bad you know.

Side note: Did you see Paartalu’s muscles? Does any Indian player boast of such a physique. Is there any other ISL player with a better build? No wonder he won those headers with such ease. Teams should start putting two people on him.