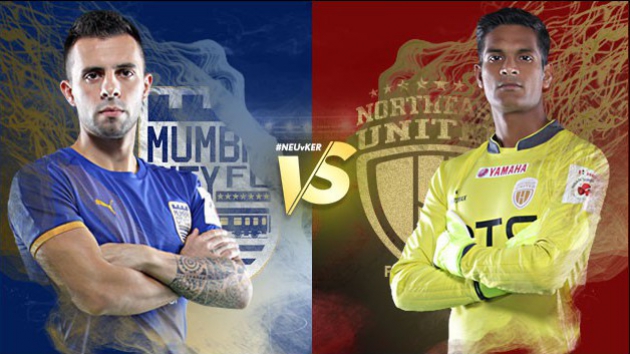 Mumbai City FC and NorthEast United FC, before this game, were two of three teams in the Indian Super League with 100% record i.e. wins, wins, and only wins. Something had to give and it did. Nelo Vingada tried to be tactical about the game and set up his team to counter the threat of Diego Forlan. His team did well up until they shot themselves in the foot, with a ball of lead.

The NorthEast United FC strategy was to sit back, soak up pressure, and hit Mumbai City FC on the counter. For the most part, they translated their strategy onto the pitch wonderfully. The problem was an unforced error from Didier Zokora. Zokora started in defence so the key matchup was Zokora vs. Forlan. Zokora lost since he was the one who messed up.

Until the goal, the pattern of the game was this: Mumbai City FC trying to free Forlan through balls over the top as well as defence-splitting passes. Throughout that period, the NorthEast defence was on the ball. This should have been a draw. Mumbai City FC didn’t deserve the three points. A draw would’ve been fair.

By the way, is it just me or does Forlan look like the BFG while other players on the pitch look like Sophie? He looked like a damn giant. I don’t remember him being so huge when he used to play for Manchester United. With the kind of performances they’ve been putting in, you wouldn’t really expect NorthEast United FC to make changes to their starting 11. However, it is NEU FC of the two teams who made all the changes largely because of the facts that this is their third game and one of their key players is already injured.

For this game, NorthEast United FC brought Nicolas Leandro Velez for Wellington Priori who didn’t have that much of a great game last time. The second change was the inclusion of Seityasen Singh for Holicharan Narzary – what I could only assume to be due to fitness issues because Narzary had a great game last time. The last change for Northeast United was the season’s first start for their marquee player Didier Zokora. He started the game in place of Mailson Alves in what was his secondary position of central defender.

The people to watch in this game from the NorthEast United side on the basis of form alone were Subrata Paul, Velez, Emiliano Alfaro, and even Rowllin Borges

On the opposite end, Mumbai City FC chose to put out an unchanged field. Partly, the reason for this was that this was only their second game of the season and largely the reason was that six of their squad members were unavailable through either injury or less intense fitness issues. Important players that Mumbai City FC will miss include Boithang Haokip, Jackichand Singh, Sony Norde, and Facundo Cardozo.

The players to watch from Mumbai City FC’s perspective include the high-flying Matias Defederico, the legendary Diego Forlan (someone whose potential arrival we talked about last year), and even the Hungarian Krisztian Vadocz.

Mumbai City FC Started Well in a Generally Tepid Half The general sense of the game was tepid. There wasn’t a lot to talk about in this game until the very end of the first half. This was mainly because of NorthEast United FC’s strategy. Their plan was to sit back and try to hit Mumbai City FC on the counter largely because they had to counter the Forlan-Defederico-Costa trident.

They were successful as Mumbai City FC tried to unlock their defence but failed. Despite the fact that they didn’t get through, Defederico lit up the stadium with his early first half performance. He did everything from a sublime back heel pass to beating his man on the dribble and unleashing a swerving shot just off the target.

Even so, the first proper chance of the game fell to NorthEast United FC’s Koffi Christian N’dri or Romaric, as he is primarily called.  Romaric’s volley from the edge of the box left Subrata Paul unsighted but the mature Indian goalkeeper managed to go down low to his left and save the shot.

Like NorthEast United FC, Mumbai City FC’s first proper chance also came through a long range shot. The shot taker was the full back Aiborlang Khongjee. Khongjee wasn’t closed down by NorthEast United FC, who probably didn’t take him seriously enough. The resultant long distance shot had dip and bounced in front of Roberto Volpato Neto, who still managed to push it away for a corner.

Good Finish To a Dull First Half By the end of the first half, NorthEast United FC had measured the mettle of Mumbai City FC and decided to come out of their shell a little. They became more daring with their counterattacks. That is precisely how they had a very interesting penalty claim when Alfaro went down inside the Mumbai City FC penalty box.

Alfaro had gotten free on goal but decided to try and beat the defender sliding in by turning back. However, he turned back into the oncoming tackle and went down. Luckily for Mumbai City FC, the defender got the ball before he swept Alfaro off his feet and into his lap.

The best chance of the game also fell to NorthEast United FC when Katsumi Yusa got free inside the box. Sadly, his touch let him down. The ball rolled too far and he leant too far back while taking the shot. As always seems to happen when strikers lean back, the shot was sliced into the sky. It looked like the incoming Mumbai City FC tackle put Yusa off. Lastly, Alfaro took a shot from the edge of the box. The shot was well struck but it was turned away a brave defender’s thick skull.

Mumbai City FC Take the Lead to Open Up the Game Mumbai City FC started the second half better. The difference was the speed of their passing which was faster than what they managed in the first half. The slight tweak to their strategy didn’t have anything to do with how they took the lead, though. They got the lead because of an unforced error from none other than Didier Zokora who tried to be too suave with his cross-field pass inside his own penalty box.

The NorthEast United FC full-back, Reagan Singh tried to manage the tough pass but slipped into the feet of Pronay Halder. In his bid to get the ball back, Singh swivelled on his bum and tried to tackle Halder who fell over. The awarded penalty was, obviously, taken by Diego Forlan who made no mistake. Mumbai City FC 1 – 0 NorthEast United FC.

Subrata Paul, however, deserves a mention. The in-form Indian goalkeeper managed to get a strong glove on the ball but the power of the penalty pulled the ball through. The suicide pass from the NorthEast United FC defence put a spanner in their well-planned machine. It warranted a change in strategy, the instrument of which was Holicharan Narzary, who came on for Seityasen Singh.

This game also happened to give us all our first chance to see the 18-year-old Jerry Mawihmingthanga – someone who took a week-long training programme at the Melwood training ground of Liverpool’s youth academy. He came on for the defensive minded, Borges.

Narzary almost scored in the 79th minute as he cut in from the right flank and lashed a curling shot towards the top corner. The keeper was well-beaten but the shot swerved wide into the side netting. For the rest of the half, NorthEast United FC tried very hard to get that elusive equaliser. Unfortunately, their efforts were only as useful the efforts of many of our readers to get a girl to like them. In case you’re slow of thought, that means Mumbai City FC won!