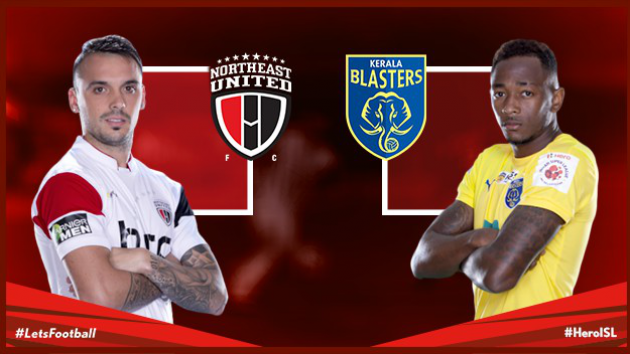 Kerala Blasters FC are bottom of the table as I predicted before the season began. I feel no sense of accomplishment in that. What I do feel proud about is Northeast United FC and how they’re on track to proving me right. I suggested in the beginning that Northeast United FC have the potential to surprise everything this time out and that is panning out to be, more or less, true.

Kerala Blasters FC are bottom of the table and on the way they’ve been playing, I feel that that is a perfectly fine place for them to be. On paper, Northeast United FC may be overachieving but it’s not a surprise for anyone who is aware of what Cesar Farias has done in the past.

It should also not be a surprise for seasoned football watchers because teams that rely on internal solutions and work with minimal funds tend to take time to gel. Farias, according to me, is the perfect man to do that for Northeast United FC.

A win would put Northeast United FC, would you believe it, top of the Indian Super League 2015 table. They’re at home so I expect them to do the job too! Northeast United FC have tempered and defanged many problems in this season. They lost a number of players which caused their early season form to be woeful. However, they have recovered since then earning 13 points out of the last 18 that they’ve contended for.

Along the way, they’ve done the double on two of the four semi-finalists of the last season – Chennaiyin FC and Atletico De Kolkata.

That’s no mean feat. I don’t need to tell you Kerala Blasters FC’s form in the last eight games. They’ve only won once in that time! So, let’s not dwell on someone else’s misery and move on to team news.

Farias chose to make huge changes to the team that beat Chennaiyin FC last time out. He replaced no less than seven players in his team. However, the changes only brought in critical players into the starting line-up because last time out, Farias chose to rest them. In came the defenders Aibor Khongjee, Robin Gurung, and Cedric Hengbart for Reagan Singh and Raju Yumnam with Andre Bikey being deployed in the midfield.

In midfield, Farias chose Alen Deory and Silas over Bruno Herrero Arias and Siam Hanghal. He also gave starts to Nicolas Velez and Sanju Pradhan while Francis Dadzie, Diomansy Kamara, and Seityasen Singh all got benched. The first half saw a lightening start from the southerners who scored in the first minute. They pressed Northeast United FC back like demons and rattled them to no end.

It was a very good beginning not only for Kerala Blasters FC but also for the game because Northeast United FC were playing at home. This would ensure that they didn’t sit back, not that that was a danger. Still, this would result in the game becoming more open, attacking, and end to end. Northeast United FC didn’t let their heads drop though. They fought back like they meant it.

Velez was a constant thorn in Kerala Blasters’ side along with Simao.

It was he who won a freekick on the right flank when Jhingan shoulder barged him too strongly. The resulting cross fell on to Hengbart’s head, five yards out from the goal. Hengbart headed the ball into the ground straight at the keeper, Stephen Bywater. Bywater parried and the spilt effort was skied by Hengbart. Despite being put under insane amounts of pressure, Kerala Blasters FC doubled their lead in the 21st minute.

It was a simple goal that came through Lobo.

Lobo broke the Northeast United FC offside trap well and his excellence was met with Josu’s excellence in the way of a lofted ball.

Lobo took the ball down well and finished under the keeper into the far corner. Northeast United FC 0 – 2 Kerala Blasters FC

The goal came from nothing. It was just sorry defending from Northeast United FC. They were keeping a high line throughout the game and it turned out to be their primary problem with this goal. Northeast United FC would continue attacking but in the last few minutes of the half, Kerala Blasters FC fashioned some really great chances to extend their lead. First they were sliced open by Chris Dagnall dribbling and crossing skills and then it was a header from Peter Ramage that caused them problems.

That was followed by a peach of a shot from Josu from outside the box. The ball was passed to him from the left flank and he hit the shot first time without breaking his stride.

Effort but No Product from Northeast United FC in Second Half The second half began in a tepid manner. Northeast United FC tried to make things happen with a substitution but it didn’t have the effect that Farias probably intended.

Kerala Blasters FC were playing well knocking the ball about and keeping the home team and home fans quiet. However, things did heat up with a melee between the two teams fuelled by a penalty claim by Simao.

The claim was genuine but it was a call that could’ve gone either way. Referee chose to favour Kerala Blasters FC which incensed Northeast United FC players to no end. Northeast United FC looked toothless throughout the second half. The only time they looked even a little bit effective was when Diomansy Kamara came on and dribbled the ball.

Even Kamara’s efforts would mean nothing because Kerala Blasters FC would add two more goals to their tally. The first of these came from German after Josu dribbled to the by-line only to pull the ball back.

German would receive the ball and caress it with their left foot into the far bottom corner. Northeast United FC 0 – 3 Kerala Blasters FC

That goal was immediately followed by Kerala Blasters FC’s fourth which was scored solely on the shoulders of Dagnall. Dagnall dribbled the ball a good distance and was pushed wider and wider by Northeast United FC defence. He was unfazed though because he smashed the ball into the right bottom corner from a left sided acute angle. Northeast United FC 0 – 4 Kerala Blasters FC

Northeast United FC players were so dejected that the rest of the second half went by in a doze. There was nothing to report for the last ten minutes up until the 91st minute. Velez scored his 4th goal of the season with a wicked left footed shot that was hit so hard that the keeper didn’t even see it. Northeast United FC 1 – 4 Kerala Blasters FC

This was, no doubt, a silly game for Northeast United FC fans. The highlanders were strangely pathetic in this game. It wasn’t even that Farias made a miscalculation or Terry Phelan came up with a rabbit out of the hat.

A high defensive line only works when you have a lot of possession or if the opponent players are slow. It doesn’t work when you give the opponents enough time to pick out a pass. The Lobo goal was like a still life painting – that’s how static the Northeast United FC defenders were.

Bikey in midfield, according to me, was a slight mistake as well although it wasn’t responsible for the loss. Bikey just isn’t mobile enough to play the role of the ball winner which is what he was put there for. Granted, he was physical but he was too slumberous to use that strength.

Also worth pointing is that Simao had a forgettable game. He forgot to show up for this game to the detriment of his team.