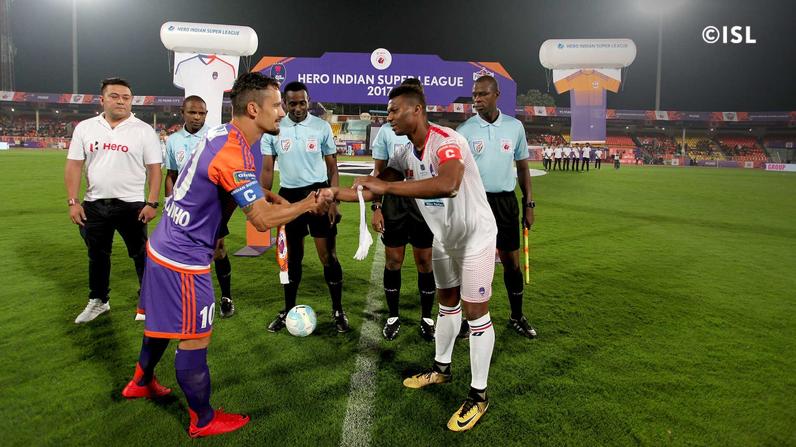 Are you wondering why FC Pune City has been so poor since the Indian Super League started? After all, they’ve never stood higher than the sixth position in the league. Well, I have an assumption that I will share in this post with you.

You already know that we’re talking about Pune City because of last night’s game. The score may have ended 2-3 but it flatters FC Pune City. It is only by virtue of three stubborn foreigners that they got two goals. The commentators suggested that it was the match officials who didn’t have the setup to make a quick change. I’m inclined to believe that but I will place the blame on the Pune City management team too. I don’t mean Popovich, by the way. He’s not responsible for the entire management team. The Board of the club are supposed to place a logistics expert at the club to see to these eventualities and head them off before they occur. Prime example: the situation with Jewel Raja.

Not starting Keane Lewis was another mistake from Pune City. I would rather have had him in the line-up over Raja in the first place. Lewis would have been able to keep up with Lallianzuala Chhangte as well when it comes to pace. As far as I remember, Lewis is pacier than Raja.

On the pitch, Pune City, believe it or not, played okay. They were the more attacking of the two teams but they lacked the requisite cutting edge. Time and again, they reached the final third to only spurn the opportunity with a nothing final ball. The problem is that with the kind of attackers they have, they should’ve blown away the opposition. They didn’t. There are three reasons why they didn’t. Delhi Dynamos clearly started the game with one goal and it wasn’t goals. It was to stifle the Pune City attack. Fortunately for them, Pune City did half their work by playing slow possession game. In basketball, when a team builds up momentum, what do their opponents do? They slow the game down. What does Mourinho do in difficult grounds? He slows things down.

Pune were slow in the first place but Delhi slowed down the game even more. They did it by playing lots of short, safe passes. There was a lot of sideways and backward passing from Delhi Dynamos. It was all wonderfully technical. When they didn’t have the ball, they would sit back to reduce Pune City’s chances. They strangled Pune City’s wonted attack force. You could even see Marcelinho getting pissed in the first half. It was all over his face.

Initially, I thought Delhi Dynamos were going for a Smash and Grab but they proved me wrong. They were just trying to lull Pune City. They were waiting for Delhi to make mistakes and they did. Throughout the first half, though, Chhangte looked an interesting player. I’ll explain in the next section.

Delhi Goals and a Bubbly Pint of Beer The first goal came from a move that Delhi had tried at least three times before in the first half. They freed Chhangte down the left flank for a whipped in cross. He had a marker on him all those times who managed to block the cross each of those times. If you can watch the match again, keep an eye on how his first three blocked crosses were similar to the successful one in the second half.

Chhangte’s cross from the left flank to the near post is how Delhi took the lead. Paulinho probably knew the cross would come there so he nipped in front of the defender and glanced the header into the net. Incidentally, if Paulinho hadn’t been there, Uche was right behind him. That was a training ground move, if I ever saw one. Very strategic, very tactical from Portugal. I love it when a plan comes together, don’t you?

The second goal was also something that Delhi were going for – a mistake from Pune City. The lackadaisical Gurtej Singh failed to clear or pass the ball and was closed down by the ever-present Paulinho. The deflected ball rolled into open space and guess who was the quickest to it. Chhangte. Chhangte took the ball, outpaced everyone, drew suckered the keeper in with a heavy touch and dinked it over him. Aamir Khan must’ve screamed, “Chhangte India!” I heard it.

The third goal was pure class. Delhi couldn’t have defended it even if they were in the mood to. Heck, Peter Schmeichel would’ve failed to get it even if he was standing next to Gianluigi Buffon. All bow to one Matias Mirabaje. He looks like a very interesting player. Emiliano Alfaro received the ball with his back to the goal and two defenders sitting on him like the ghost from the Thai horror movie Shutter. He still turned them, adopted one more defender (because two weren’t enough of a challenge) and shot at the goal through the legs of the third defender. It was a moment of magic, a wonderful solo goal from a wonderful player.

The second goal was created by Marcelinho who cut into the box from the right flank with the ball. He took his man to the touchline, beat him on the dribble, and put in a peach of low cross that beat everyone but Marcos Tebar. It was a tap in for Tebar.

It was all pointless from Pune City because it was too little too late. This leaves me asking a simple question. Why was there no urgency from the beginning of the game?