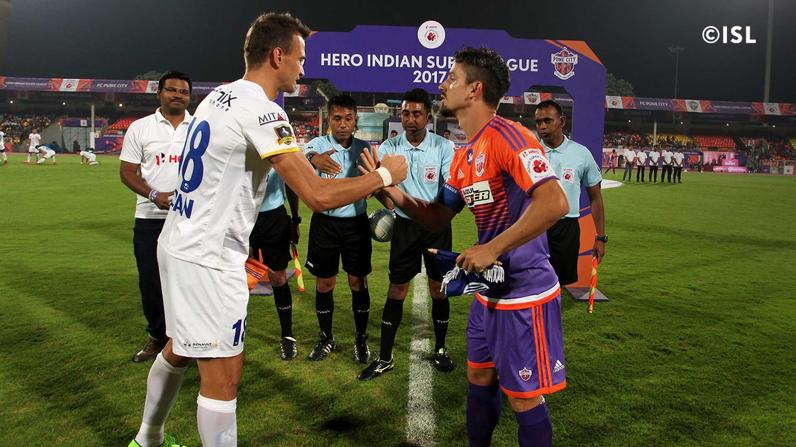 Mumbai City FC fans will tell you that the referee took three points away from them. I don’t like partisanship but I can’t disagree fully with Mumbai City fans here. Still, I want to tell Mumbai City FC fans that half of the blame for these two lost points lies on their manager. You can’t try to defend a single goal lead for 75 minutes and then complain when you lose the game. It was quite sad really. This was the first proper derby of Indian Super League’s fourth season. The Maharashtra derby saw the Jekyll and Hyde of FC Pune City welcome the mixed bag of Mumbai City FC.

Both managers chose to keep their sides unchanged. This meant that Jonatan Lucca and Kean Lewis remained on the bench for FCPC while MCFC held back Thiago Santos (last game’s goal scorer).

Both keepers would’ve been eager to start this game as they’ve been in good form. They continued their decent form as well, although, Amrinder Singh shown much more than Kamaljit Singh.

The moment I saw the team sheets, I knew this game will be about Lucian Goian and Emiliano Alfaro. Unfortunately, as it turned out, the game was about Raktim Shah. Nope, he isn’t a player but he did play for FCPC in this game. He was the referee who decided to make the game all about himself. Later on that though.

The Worst Thing That Happened to Mumbai City FC It was an amazing hit from Singh. He dribbled from the left flank into the inside left wing area above the box. He hit across the ball with his right foot, sending it into the far left corner. He could get that shot off because no one from Pune City pushed forward to close him down.

As good as that goal was, it wasn’t exactly what an Alexandre Guimares team ever needs. That is because Guimares always shuts down when his team takes the lead. In the majority of situations, it works out well for him but on this occasion it backfired. It backfired in the way that such situations backfire usually because Mumbai defended very well after taking the lead.

In fact, they defended so well that Marcelinho resorted to diving and steamrolling the floor every time a fly landed on the player next to him. He complained, whined, and just turned into a brat. To be fair to him, most flair players tend to do this when things aren’t going for them. This happens because such players are winners at heart and they get frustrated when they don’t have an impact.

A Tale of Raktim Shah, Two Penalties and One Offside It all went sour for Mumbai City and Guimares in the latter stages of the second half because Raktim Shah decided to take the game by the scruff of its neck in favour of Pune City. The referee became the most important FC Pune City player by the virtue of three decisions. First, he denied Mumbai a penalty, in the next one he gave a penalty to FC Pune City, and in the last he let a debatable offside goal stand.

I have a feeling that ISL organisers and promoters have a policy to blank out all questionable decisions made by referees. I say this because I’ve been trying to find a video of the Mumbai City denied penalty and can’t find anything either on ISL or anywhere else. More importantly, while Guimares mentioned poor refereeing and how it affected his team he didn’t pinpoint the sequence.

This is particularly insidious because not only do they have the broadcaster on board but the personnel as well. They’re trying to guide the narrative on the whole, which is a problem for me. It was a controversial sequence. The referee denied a penalty to Lucian Goian in the FCPC box and then gave a penalty to FCPC from the resulting attack when Raju Gaikwad tackled Diego Carlos. Let me be clear here. The Carlos tackle was a penalty. My contention is that the Goian tackle was also a penalty.

The third decision that I’m questioning here is the second goal from FCPC. I can’t claim that that goal was offside completely because I don’t have enough video evidence but I have my doubts. It looked offside from the angle that was available. This is questionable on the whole and shouldn’t be made a bigger deal than it needs to be.

On the whole, the game was quite dull simply because Guimares decided to shut up shop for 75 minutes of the game. Credit is also due to FCPC for not giving up or even relaxing after their equaliser. They fought hard, played tough, struggled, persevered, and in the end got their just rewards.

I don’t care if they got help from the referee or not. At the very least, they deserved to get one point of the game. In fact, just for playing a positive game, they deserve all three points. Well done Pune.