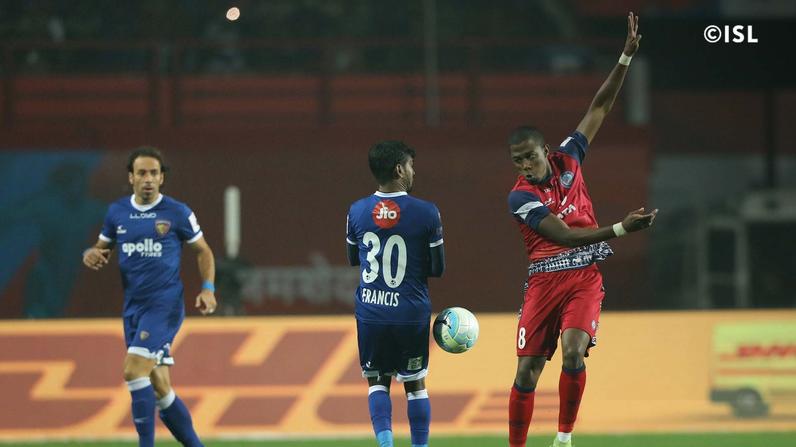 I like technical games but let me be honest. During the festive season, you don’t really want to see technical games. You want stuff that gets your blood pumping and brings you to the edge of your seat. Yesterday’s game between Chennaiyin FC and Jamshedpur FC wasn’t it. It was a dull affair and I’ve come to realise that virtually every Chennaiyin FC game is a dull affair. Don’t get me wrong, the Super Machans are a great footballing side but They. Just. Don’t. Entertain.

Chennaiyin FC are extremely proficient in managing games. If you give them a lead, you can be pretty sure that you’ll lose the game. They’re exceptional in killing opponents off. Jamshedpur, unfortunately, couldn’t have done anything yesterday. They didn’t give away a lead to Chennaiyin FC. The referee decided to give them a handicap. Before I comment on Jamshedpur FC’s biggest problem, let me write about something that was blown all out of proportion – the state of their pitch. There was a lot of hullaballoo about their pitch because of divots caused by players’ studs. Partly, the criticism was fair because divots can cause serious injuries. However, it was also unfair because it was their first game ever. A new franchise must get some leeway to err so long as they correct their mistakes.

Yesterday, it looked like they had corrected their mistake to a certain extent. While patches of light green showed on the overall dark green of the pitch, it is to be expected. A new franchise can’t relay the pitch entire because of backlash after its first game. They fixed the problematic portions though, which is commendable.

Coming to the lack of bite of the Men of Steel…This is an on-going problem with Jamshedpur FC, isn’t it? They’ve now played a total of seven games and only scored goals from set pieces. The first was a header from a free kick and the other penalty.

It’s not like Jamshedpur FC lined up to be negative in this game against Chennaiyin FC. They, in fact, started better than their opponents. Their opening blitz, however, only lasted for about 10-15 minutes, after which their attacking drive petered out.

In that period, the Men of Steel attacked well on the right flank with their full back overlapping to good effect. This worked especially because Chennaiyin’s Gregory Nelson didn’t come back to support Jerry Lalrinzuala. Jamshedpur crossed multiple times from that flank and even had men in the middle but Henrique Sereno and Mailson Alves handled them well.

This was a period in which they played as a team but it soon broke down. Jamshedpur have a tendency to dribble when they should pass. Their attackers also have a tendency to play individually as opposed to with each other. This is particularly true of Kervens Belfort who tries to turn his defender or beat him on the dribble every chance he gets.

I like Belfort but I think he’s under pressure and is taking responsibility for Jamshedpur’s attacking woes. I think some tactical changes may help also. They need to make triangles and play some one-twos to break down stubborn defences.

As poor as Jamshedpur FC is while attacking, they’re conversely good while defending. It’s a strange contradiction because the reason they’re good at defending is the reason they’re so bad at attacking. Jamshedpur FC defend well because they defend with coordination. Their entire team is very well drilled in defence because they retain their shape really well. Against every attack, they manage to get back to two flat banks of four.

It’s a contradiction because if they use the same kind of team work in attack, they should be able to score goals. Instead, they seem to want to dribble individually or shoot from weird positions (far away or acute angles). Maybe Steve Coppell has been focusing on defence in pre-season?

Chennaiyin FC and Their Game Management Chennaiyin FC came as table toppers and they left as table toppers. They were always going to leave as table toppers but it is still significant because they’ve distanced everyone now except for FC Goa. Goa is the only team that can overtake them now but they’ll have to win their two games in hand to do so.

John Gregory pulled a real surprise in this game. It was one of those double whammy surprises. First, he changed his starting line-up to bring in Rene Mihelic and Gregory Nelson. That starting line-up must’ve given Jamshedpur a pause. The second whammy, though, was that even Chennaiyin had attacking personnel on the pitch, they played like they always do – carefully.

It’s a hallmark of Chennaiyin FC this season. They’re very cautious in how they manage their games. They never overstretch themselves on the attack and are rarely ever stretched thin in defence. The balance that Gregory has managed to create in his team is, honestly, astounding. Other clubs in the Indian Super League need to pay attention to his setup.

It is indeed true. Chennaiyin are the best team in the league when it comes to managing the game and finishing it off. In this game, they first held off Jamshedpur FC at an arm’s length and absorbed all the pressure of playing away from home. They were like an immovable rock and Jamshedpur drained themselves trying to wear them out.

Once they got their goal, they were even tighter. It wasn’t all that surprising because they’ve done this before to teams – take the lead and stifle them. This stifling doesn’t mean that they sit back with only defence on their minds. Instead, they attack but in a controlled manner.

Once they have their lead, their attacks are more like counters. If they happen into possession then they never overcommit. They attack with care, control, and wariness. It’s not entertaining but it wins them games which is why they’re top of the table.

The Only Goal of the Game There was only one goal in the game that was very tactical in nature as all Chennaiyin FC games are turning out to be this season. The Super Machans just have a knack for countering their opponents’ strengths thanks to Gregory. This usually results in a lockdown for the entire game peppered with an opportunity here or there. Chennaiyin games are never free flowing.

However, even Chennaiyin’s tactical master class was overshadowed by something else in this game. Step forward, Mr Referee. You wanted the spotlight in this game? Well, you got it. You gave two penalties that were both not penalties. Before you claim that two bad decisions make one right, let me tell you they don’t.

Jamshedpur can’t complain though. At least the referee balanced the game out with his two calls. Belfort should be blaming himself because that was a horrible penalty. I don’t know what he was thinking but I think he must be thinking too much about that one. He is under pressure after all. The shot was towards the middle of the net and at a comfortable height. It wasn’t even a dink. It was hit at a comfortable pace for the keeper too. Still, Karanjit Singh did well in a season where Indian goalkeepers are making fools of themselves.

The second half began with Jamshedpur pushing for something. However, Chennaiyin were in a strong position and thwarted any and all attempts even before they could be considered as attempts. Within half an hour, Steve Coppell decided to go all in, if I may be partial to some poker parlance.

Coppell threw on all his available attacking options in the form of Sameehg Doutie and Izu Azuka. He even took off his sumo wrestler, Andre Bikey. It didn’t work, though. Chennaiyin FC saw the game out with relative ease.