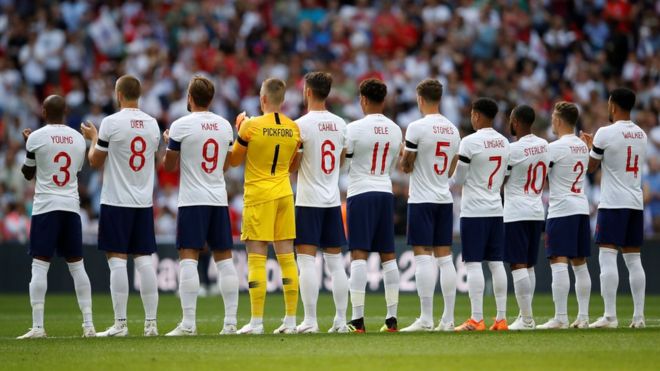 I don’t want England to win the World Cup. There. I have now voiced out loud what will be one of the most unpopular opinions on the internet. I have very compelling reasons for this opinion, though, and none of them are that the England team is full of Spuds (although, that does bother me).

But, this is an intro so I can’t divulge the meat of what I’m going to write here. That’ll be like pissing in the wind while holding an axe over my own foot. Apart from my opinion on England at the World Cup, there are a few transfer dealings that you should know about if you like the Indian Super League. Here goes. Translation: why no English in the world cup (in case you’re not fascinated by French like most millennials today)?

The reason why I don’t want England to win the World Cup is twofold.

The English have all three and I don’t like it (have I said that enough?). They either use Harry Kane like a target man with midfielders running at him to collect any second balls or they push the ball wide to cross blindly into the middle. They’re perpetually trusting Kane to be in the right place. They don’t even aim for him. They just “whip it in”. Sorry, but that is low percentage football and I don’t like it (anyone keeping a count?). Then again, what can you expect from a stooge like Southgate.

You know I would have been okay with England winning it if they had only played the big teams. They haven’t. They’ve steamrolled over the minnows to reach the semis. The only supposedly big team they’ve played is Belgium in the groups and they lost that one. They barely beat Tunisia, walloped Panama (who wouldn’t have, eh?), and lost to Belgium. They had plenty of crosses against Belgium but none were converted and that is my problem with their style.

I love the English Premier League but the English national team doesn’t deserve this world cup. And, if they win it, we’ll never hear the end of it from the English media. They’ll immediately start touting the players as the golden generation or even the best in the world. They’re not. While ATK are well ahead of all teams when it comes to quality recruitment, it seems that Kerala Blasters FC brass has woken up in time. Their latest three signings are all foreigners with decent records. However, the standout of these is no doubt Matej Poplatnik. His numbers are such that I expect him to give Miku and Coro a run for their money. Let me explain.

Poplatnik isn’t over the hill. He’s only 25, which means that he’s at his peak physically. He isn’t short of stature either. He’s 5’ 8’’ which is more than respectable in Indian football. Most importantly, he is a striker with an excellent strike rate. The man has scored 75 goals in about 158 appearances in his career.

In case you’re poor at maths, that’s a goal in just under two games. More telling his goal contributions in terms of minutes. He scores a goal in every 155 minutes – that’s just over every 1.5 games. Finally, Poplatnik is versatile. His preferred position is striker but he can play on both wings. In fact, he has played a large part of his career on the right wing.

This versatility would make sense because KBFC have also signed the Serbian Slavisa Stojanovic, another striker. Stojanovic, however, doesn’t have the same scoring record that Poplatnik does. But, he does possess the same versatility. In fact, he is more versatile.

He can play striker, both wings, support striker, left midfield, and even attacking midfield. I see him more as a winger or support striker than the lone striker but I’m not coaching KBFC, so I don’t know.

The Blasters’ third signing is Cyril Kali, a defender from France who has spent the majority of his playing career in Greece. It seems that David James is going for versatility with all his signings because Kali can play in the centre of defence, on the left of defence and even as a defensive midfielder. Either Kali will play second fiddle to Edathodika and Jhingan or he will be deployed on the left. I think former is more likely than the latter. Bengaluru FC have added another Spaniard to their ranks in the form of the midfield, flair player Xisco Hernandez Marcos. Xisco will be joining the southern club from the third tier of the Spanish league where he used to play for Atletico Baleares.

Versatility is definitely a theme in the upcoming season of the ISL as Xisco is another example of the emphasis. Xisco can play in no less than seven positions but he prefers to be deployed on the right wing. However, in the Indian setup, I won’t be surprised if Xisco is deployed in the attacking midfielder role because he’s as proficient in the central attacking midfield role as he is in wide right.

Xisco contributed to the offence of his teams regularly either through goals or assists. What is surprising, though, is that he has scored more than he has assisted. Have FC Goa finally learnt their lesson. Has Sergio Lobera decided to plug the leak in their defence? Will Laxmikant Kattimani be relegated to the bench? I doubt it. You don’t relegate your captain to the bench for the new boy, unless you’ve got balls of Colossus.

Why am I ranting? It’s because FC Goa have signed one Lalthuammawia Ralte. Ralte showed up well last season when he was asked to step up in the absence of the unavailable Bengaluru FC’s no. 1 Gurpreet Singh Sandhu. He was called in for two games and I felt he did well in those two games. In one he managed to keep a clean sheet while in the other he only conceded once.

I do remember watching him and thinking that this short fella is good. I hope he’s given a chance by Lobera and his short stature doesn’t lead to him being pre-judged.