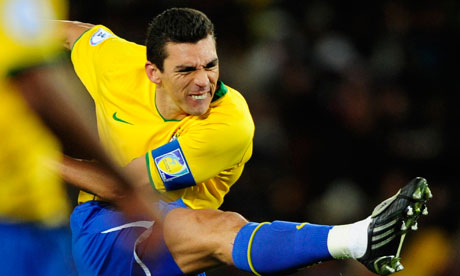 FC Goa look all set to make the ISL 2015 season even better than their ISL 2014 season. The preparations have been fast-tracked which has resulted in the Goans almost on the verge of finalising their ISL 2015 squad. The highlight of moves being made in terms of FC Goa 2015 squad is that they may sign the Brazilian defender Lucio as their next ISL Marquee Player.

Lucio boasts of a career that can make most footballers envious. He has won virtually everything there is to be won in a footballer’s career. His accolades include. Lucio will bring a lot of experience to the FC Goa 2015 squad defence and will most probably by partnering Gregory Arnolin who had a wonderful debut Indian Super League season last time out.

The Brazilian is typically a no nonsense defender with a lot of upper body strength and a good leap off the ground. His ball control skills, while not legendary, are good enough for him to be a ball playing defender in the ISL.

At the age of 36, Lucio may not have a lot of speed, but he will look to compensate for that with his experience. Lucio also has a mean freekick on him. It comes as no surprise that FC Goa have decided on a new ISL Marquee Player as Robert Pires could only play eight games out of a total of 16.

In fact, if you assess Pires’s contributions in those eight games, it becomes clear why FC Goa’s pragmatic coach Zico chose to do without him and look to add Lucio to the FC Goa 2015 squad. Here are Pires’s stats.

The impact of Robert Pires was limited on the pitch. These numbers aren’t surprising because at the age of 41, everyone knew that Pires was brought in for marketing reasons rather than footballing reasons. Zico was actually given a list of players who were interested in becoming ISL Marquee players for FC Goa 2015 squad. In the end, Zico shortlisted Lucio and Juan Roman Riquelme as potential member of FC Goa 2015 squad.

Those of you who’ve been following football for some time will remember Riquelme being brought to Europe by the resurgent Barcelona FC in 2002. Riquelme only played for Barcelona 30 times in three years before he was shipped to Villareal FC.

Riquelme actually made a name for himself with the Yellow Submarine. At Villareal Riquelme pulled strings from the midfield with Diego Forlan, who is being linked with Atletico De Kolkata, the most obvious beneficiary. Both would go on to become famous players from their countries and in Europe. Riquelme will be 37 years and is an attacking midfielder.

Riquelme’s age and the fact that he plays in midfield is probably why Zico chose to go with Lucio over him. Riquelme retired in 2011-2012 before making a comeback for his childhood team Boca Juniors. At the beginning of this Riquelme retired again but is still being connected to ISL as a potential ISL Marquee Player. Riquelme, by the way, also has a very good freekick on him.

I believe Zico made a wiser and much more informed choice in choosing Lucio over Riquelme for FC Goa 2015 sqaud. The reason for this is that the latter may not have much in the tank for the rigours of ISL. Lucio is a safer bet and has shown a keen interest in working with Zico.

Zico, seeing the potential of his team, has decided to get a player who is only 36 and can contribute far more than Pires did at 36 to the FC Goa 2015 squad. It’s also a smart move to sign a central defender as the ISL Marquee Player because central defenders tend to have longer playing careers. Central defenders aren’t required to have a lot of stamina since they don’t have to run as much as midfielders who cover much greater areas.

For example, Paolo Maldini, the epitome of central defenders in recent history played at the top of the ladder till he was 41. Maldini was playing for AC Milan as late as 2009. He was born in 1968. Granted, players like Maldini come once in a lifetime but Lucio is also in the same mould. What’s better is that Lucio is only 36 and is still playing at the top of the league in Brazil. More importantly, Lucio looks to be very keen to work with the legendary coach Zico.

Mainstream media is reporting that Lucio already has a written offer in front of him. Moreover, it is expected that he will sign very soon, if he hasn’t already.